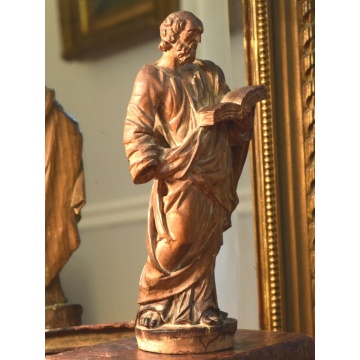 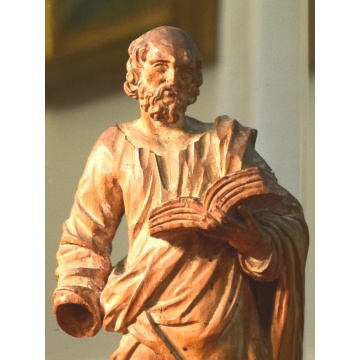 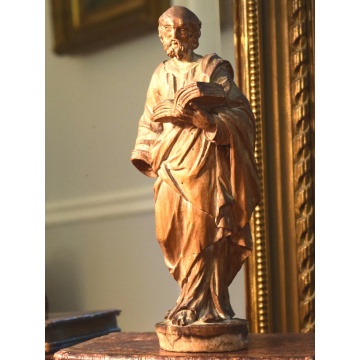 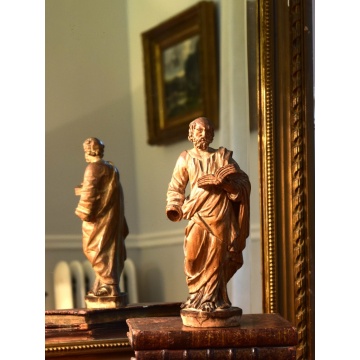 This charming Statue is only 11 inches high but rich in details.
At one point the statue would have been painted and it still retains light marks of the passed polychromy.

The Statue was identified as St Paul the Evangelist due to the Book it is holding in its hand.

St Paul, or Paul Of Tarse, otherwise known as Saul, was part of the Apostles yet not part of the original 12.
He is said to have met Christ between AD 32 and 36.
Starting AD 40 he founded several Churches in what is part of modern day Turkey and travelled to Asia and Greece.
By AD 50 he started writing letters to the different churches and congregations, which became known as the Pauline Letters or ‘Epitres Pauliennes’ in French.
They are today considered as the oldest Christian written documents.
The book he holds in his left hand harkens back to those Epistles.

The movement given to his toga by the wood carver is very well executed, full of life and strength.
The Statue would have had an aureola which is no longer present

The lightness of the draping is perfectly in line with the Reims school of woodwork in the 18th century.

The Statue has not been restored on purpose and bears the passage of time with both losses of plaster and paint as well as of pieces of wood.
We believe that for piece like this we would rather see the damage but hold on to the beauty of the original art form.
St Paul is missing his right hand as shown on the photos, as well as the aureola as noted above.
The wood has been treated to prevent further damages.