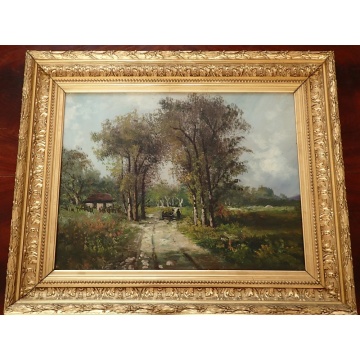 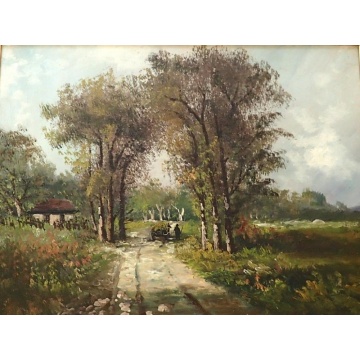 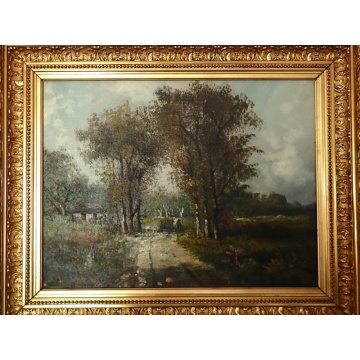 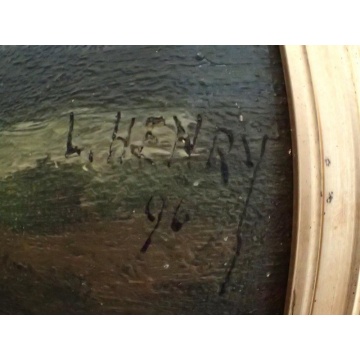 This charming painting depicts a farmer leading his cart down a small shaded path with towering trees.

The painting is framed in a beautiful gilded wood mid 19th century frame.

Typical of the Barbizon School of painting, this sizeable piece was painted by Lucien HENRY in 1896, hence the year he was to pass, and five years after his return from exile…
The paiting is signed and dated on the right hand side.

This painter was quite well known for his unusual past and deserves a little more background.

Lucien Felix Henry (1850-1896), artist, was born at Sisteron, France, son of French parents. He studied under Viollet-le-Duc and at the ‘Ecole des Beaux Arts’ under Gérôme.
A communard, he was sentenced to death for political offences in the 1871 Paris commune but was exiled to New Caledonia.
In June 1879 after a political amnesty he went to Sydney where on 6 January 1880 he married a widow Juliette Lopes, née Lebeau, according to Presbyterian rites.
He was appointed instructor at the first modelling school in the Sydney Mechanics’ School of Arts.
By 1884 Henry was paid £250 a year for teaching ‘Geometry, Perspective, Freehand,
Drawing and modelling’ and was also given the fees of all students entering his classes!
A founder of the Art Society of New South Wales, he was a committee member by 1884 and often exhibited for the society.
Active as both an artist and a teacher, Henry worked in many fields including sculpture, modelling, terracotta work, architecture and design.

He discovered the artistic possibilities of the waratah and advocated the use of Australian colours, fauna and flora for decorative art.
He executed many portraits and busts and designed the stained-glass windows in Sydney Town Hall.
His series of Australian designs, now in the Museum of Applied Arts and Sciences, show his technical skill.
Handsome, ‘with a Victor-Hugo head and the Victor-Hugo ‘enthusiasm’, a magnetic personality and tireless energy, Henry exercised a powerful influence for good on Australian sculpture and on his students who included the well-known Benjamin Minns, Sydney Cathels, G. H. Aurousseau and Lucien Dechaineux.

On 25 May 1891, a pardoned Henry returned to France after a farewell banquet.
In that year he published in Paris the Legend of the Waratah and dedicated it to Fred Broomfield, prominent in Labor circles in New South Wales.
In Sydney however, bankruptcy proceedings were taken against him by his stepson at the instance of his wife who also started divorce proceedings!
Henry died on 10 March 1896 at Le Pavé, St Léonard, Haute-Vienne, where he was buried.

The painting was acquired in December 2017 in Valence.