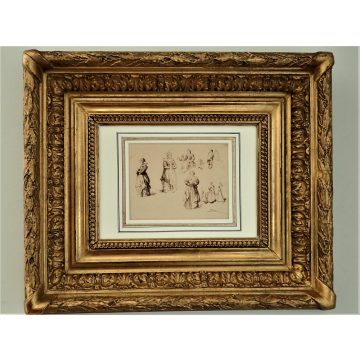 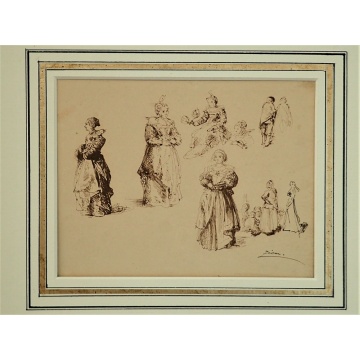 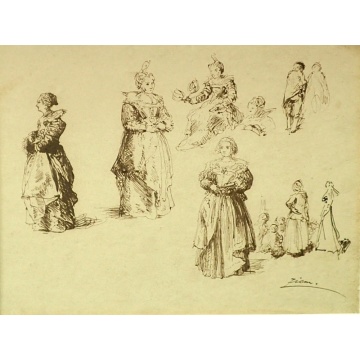 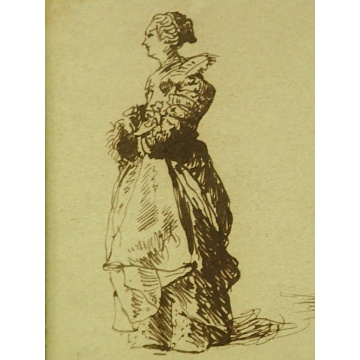 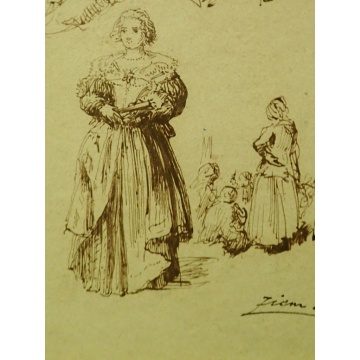 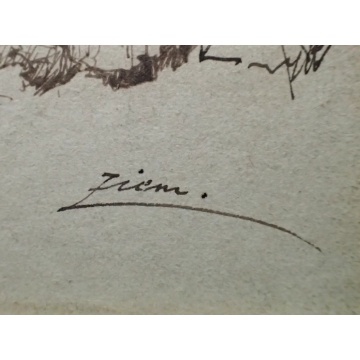 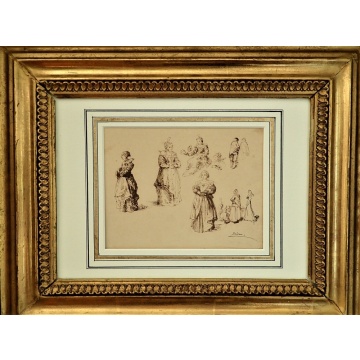 Our drawing shows preparatory study for what was probably a Venice Painting due to the elaborate dresses depicted.
The dresses are typical of the earliest part of the 17th Century, the height of Venice’s glory.
Drawn in brown Ink they show the talent for expressions typical of Felix ZIEM.

Felix Francois Georges Philibert ZIEM was born in 1821, in Beaune, the Burgundy region of France, to a French woman and an immigrant from Croatia.
While he planned originally to be an architect and studied for it at the Ecole des Beaux Arts of Dijon he soon discovered he had more talent as a painter.
Moving to Marseille in 1839, he received his formal training as a painter from Adolphe MONTICELLI.
Soon what had started as a hobby became a passion and a career. Following a visit to Italy he fell in love with Venice, a city that became his main inspiration and where he returned annually until 1892.

Ziem also painted portraits as well as landscapes depicting the places he travelled.
After an extensive trip through the Ottoman Empire he started to include an Orientalist Theme in his paintings.
Istanbul, Cairo and Upper Egypt where some of his favourite spots….
So much so that he decided to build a ‘fake’ Mosque in Les Martigues near Marseille in order to better represent the places he had seen.

Ziem first exhibited at the Paris Salon in 1849 and remained a regular during many years. In 1857 the French government recognized his contribution to the Arts by making him a Chevalier of the Legion of Honor.
He lived for about ten years between Marseille and Nice and opened a drawing school in Marseille, where he gave lessons to the aristocratic society,
Ziem was a commercially successful artist during his own lifetime a rare occurrence in his discipline.
Far from hoarding his wealth, sponsored many aspiring young artists using the regular income he drew from his painting sales and his school.

Considered to be of the Barbizon School, ZIEM was however considered to be the original inspiration for the Impressionist School of Painting…
This is apparent in the progression of his work, going from nearly classical paintings to larger and denser strokes of colour and light in his later work.
Though his paintings are never dated, the painting strokes are a pretty good indication of the decade in which the painting was realized.
Felix ZIEM passed away in 1911 and was buried in Paris at the Pere Lachaise Cemetery.

Our delicate Sketches were purchased in Paris in March of 2018, and are signed by Felix Ziem on the lower right hand side.
The Frame is a gorgeous mid 19th century period frame in Gilt Wood called a ‘cadre style Barbizon’, in superb shape.