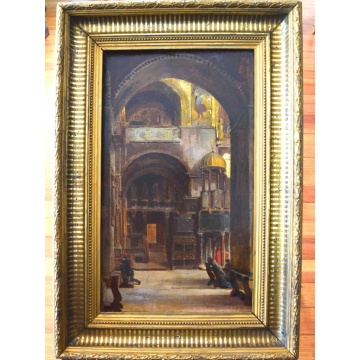 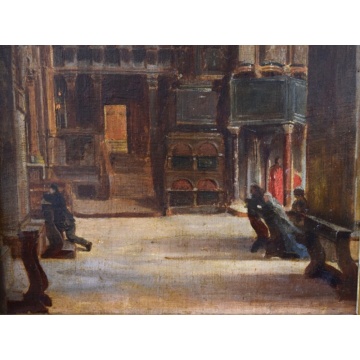 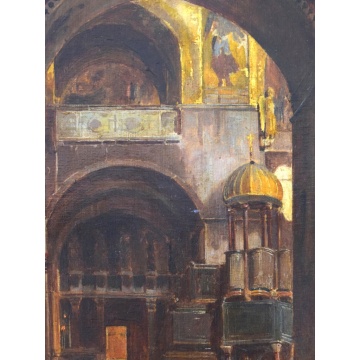 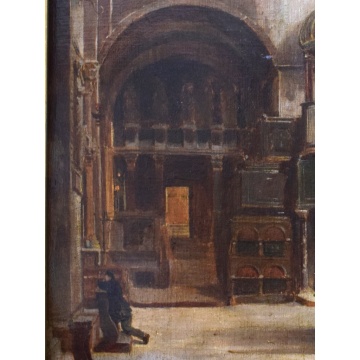 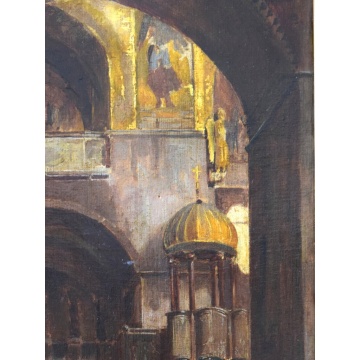 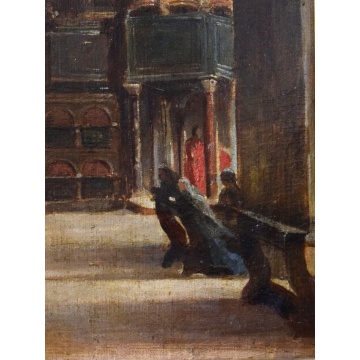 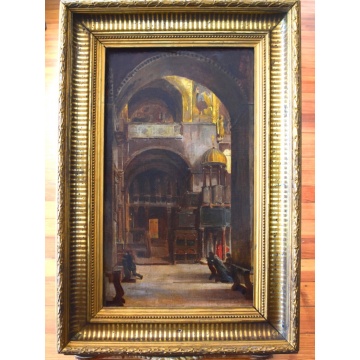 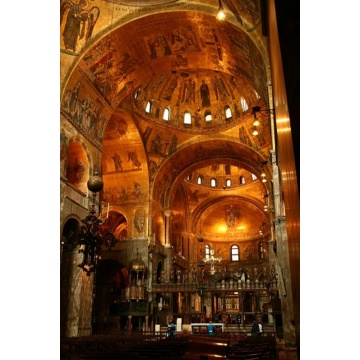 19th Century Oil Rendition of The San Marco Basilica by a Follower of Granet.

The painting precisely represents the left hand side of the Nave right past the Iconostasis, or rood screen of the church, with the Pulpit where the Scriptures were read by the Priest showing on the right hand side with its rounded dome.
The painter is facing towards the back of the chapel and towards the Capella Della Madonna Nicopeia.
On the upper right register one of the Golden mosaics is represented.
We are adding as a last photo a photo taken in San Marco showing the Pulpit and the beginning of the left hand side of the nave.

San Marco is the well known as the most famous of the churches in Venice and one of the finest examples of Byzantine architecture in the world.
It is as well inspired by the Hagia Sophia Church in Constantinople, or present day Istanbul.
The Basilica has a floor plan in the shape of a Greek cross, with a dome over the crossing and another dome on each of the four arms. Each arm has a central aisle and two side aisles. A narthex wrapped around the west end disguises the cross shape but creates a wide, flat surface for the grand facade.
St. Mark’s church today is considered the living heritage of Roman, Byzantine and Venetian culture.

The painting is heavily influenced by Granet’s work.

Francois Marius GRANET was born in 1775 in Aix en Provence.
In 1798 he went to Paris to study art and obtained residency at the Convent des Capucins, which had been reclaimed after the revolution and was solely occupied by artists at that time.
In the shadows and lights of the convent Granet found his calling and the type of paintings he would devote his life to.
After a long sojourn in Rome he eventually went back to Aix and passed away there in November of 1849.
He left behind him a treasure trove of paintings. A museum is dedicated to his work in Aix En Provence.

This painting in done in Oil on a panel and shows a slight restoration on the upper corner.
The painting measures 17.71 inches high x 10.23 width.
The Frame measures 24.10 inches high x 16.53 width.