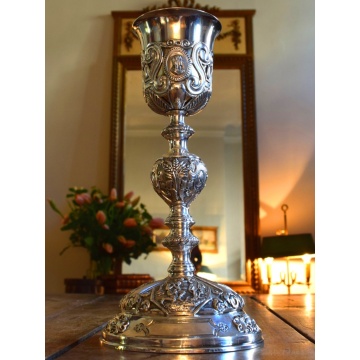 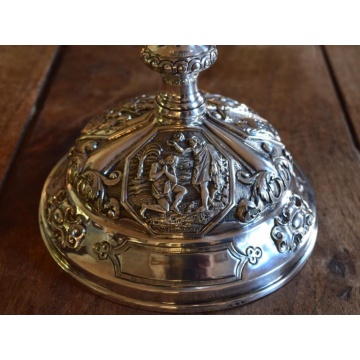 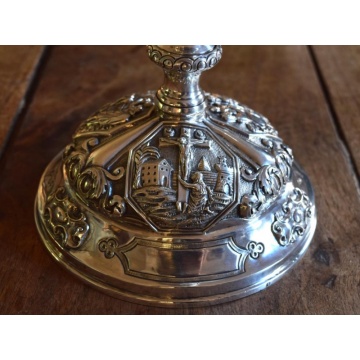 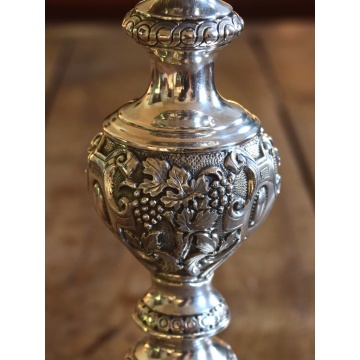 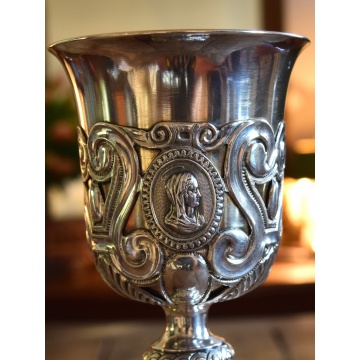 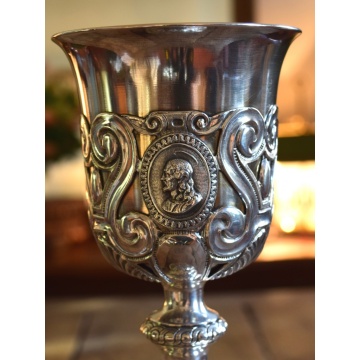 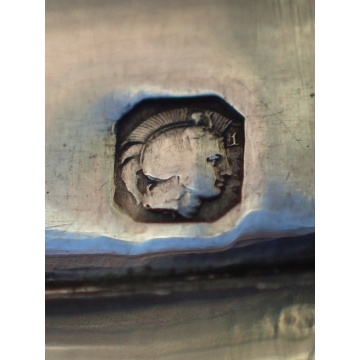 This beautiful piece, with its intricate décor,is typical of the second part of the 1800s .

When you describe a chalice, you usually start at the bottom and work your way to the top. The foot of the vessel tells us a great deal about the chalice and its history.
The foot is commonly inscribed with the maker’s information and the year hallmark as well.

The base is almost always oversized compared to the bowl, as Catholic doctrine notes the sacredness of the wine and emphasizes the importance of keeping the wine from being spilled.
The foot of our Chalice holds 3 delicately carved scenes taken from the bible:
-The Christ with St Joseph and St John the Baptist as a child
-The Baptism of the Christ by St John
-St Mary Magdalene at the foot of the Holy Cross

Above the base is the stem. Almost all chalices have a raised knob, on the stem. This practice also arose out of Catholic doctrine about the importance of not spilling the sacred wine. The knob is another area of the chalice that is typically ornamented.
In this case it is decorated with grapes and wine leaves on one side and with wheat ears on the other.

Above the stem, is the bowl. The bowl is divided into two parts. The lower portion of the bowl is called the cup. It is typically ornamented with Saints, or floral motifs.The upper part of the bowl, or the rim, is required to be unadorned.
On our chalice the Tulip shaped Cup holds medallions showing: Christ, The Virgin Mary and St Joseph.
The inside of the Cup is gilded with 18 carat gold.

While often, only the part that touches the sacrament is made from precious metals, in the case of our chalice, the whole piece is entirely made of solid silver.
The piece is in excellent condition, and has been created by one of the greatest Master Silversmiths in France who specialized in Religious Art.

He was simply one of the Main Master Silversmiths in France specializing in Religious items such as chalices and ciborias.
He founded the Lyonnais Dynasty of Silversmiths which became particularly for their gorgeous Sacred Art pieces.
His descendants were as famous as he was. His daughter and stepson followed in his footsteps and his grandson went on to work in silver until the 1930s.
All in all they created some of the most precious pieces of Religious art in France.