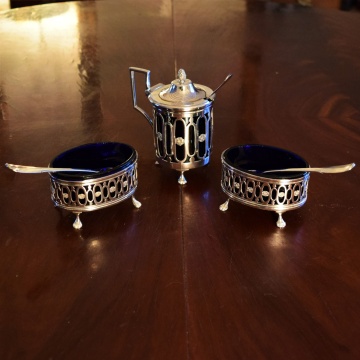 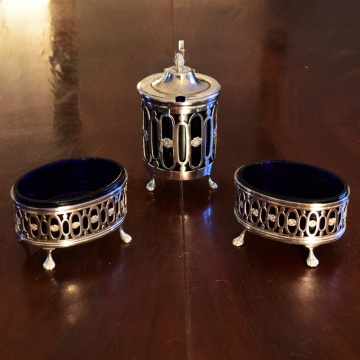 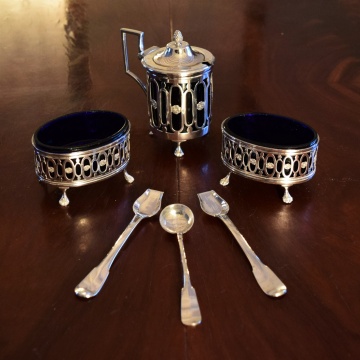 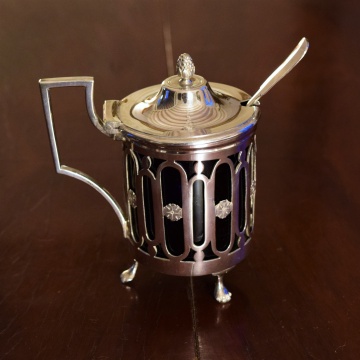 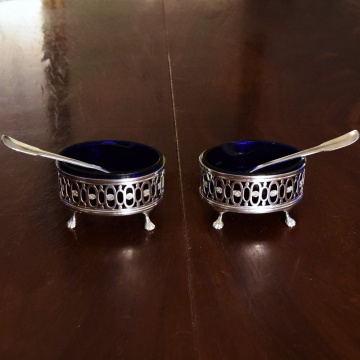 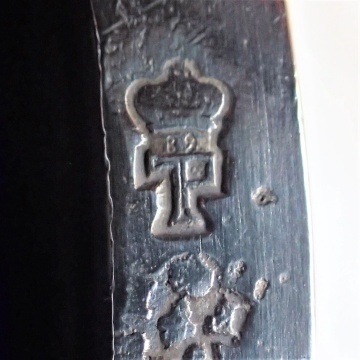 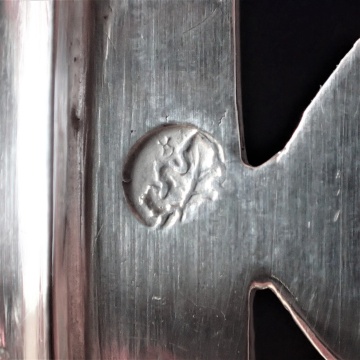 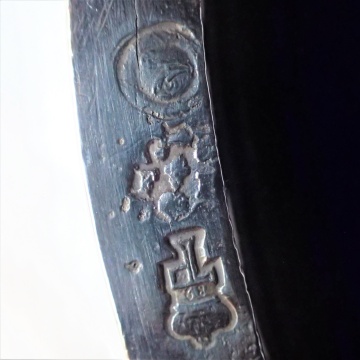 A Beautiful and Complete French Silver Condiment Set dating back to 1789, by Maître Orfèvre François Picard.
Consisting of two master salts and one Mustard Pot, this set comes with the matching spoons.

The Salt Cellars and the Mustard Pot are decorated with silver arcades and rosettes and rest on lion’s paws.
The Mustard pot has a silver raspberry finial.
The inserts are in cobalt blue crystal.

The spoons are as usual for this period by a Spoon maker hence a different Maker then the condiment set, in this case Nicolas Jouette
who registered his mark in 1788.
As usual the particularity of these pieces apart from their lovely aspect is the fact that they pre date the French Revolution by a few months..
Hence the fact that they avoided destruction during that period is always a wonder…
Indeed these objects were created at gthe end of the Old Regime.
The Salt cellars are 3.14 inches long x 2.26 inches wide x 1.88 inches high.
The Mustard pot measures: 4.33 inches high x 3.34 inches long

The Fermiers Généraux Marks are strikingly crisp and beautiful on it:
Photo # 6:
The Year Hallmark or Poinçon de Jurande is a Crowned P used by Fermier General (Tax collector in essence) Jean François Kalendrin in Paris starting September 11th 1789 (Notice the tiny 89 right below the crown…)and until the end of 1789 with the unraveling of the French Revolution.
Interestingly Jean Francois Kalendrin refused to pick up his old charge when requested to do so in 1791 (though in a new format)and preferred to immigrate.

Photo # 7: We have the Discharge Mark (in essence taxes were paid and object was finished and ready to be sold) featuring a leaf which was used starting February 23rd 1789 until the end of the Old Regime.
Hence we can pinpoint the creation of the lovely ensemble to 1789 after February and before December.

Photo # 8:
We have the FP Mark framing a fleur de Lys, registered by François Picard in 1784 in Paris and used until the last months of 1789, before the Old Regime collapsed.
On the same photo (in the upper corner) we also have the A in a circle that was used as a Charge Mark (for the right to create) starting February 23rd 1789 and until the Old Regime Marks and status were reformed.