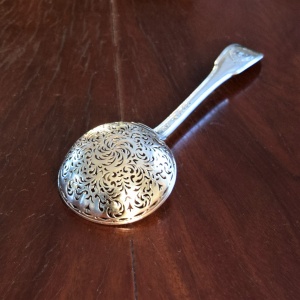 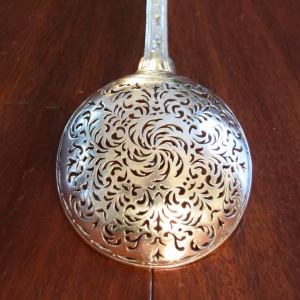 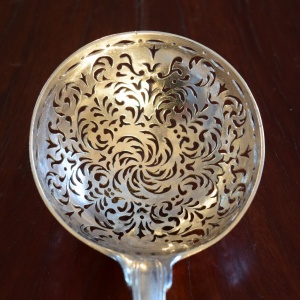 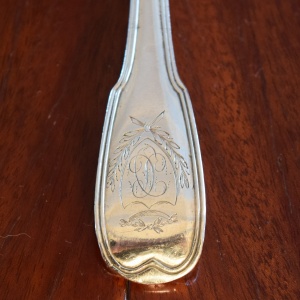 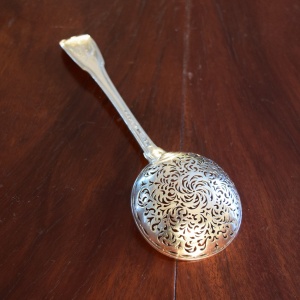 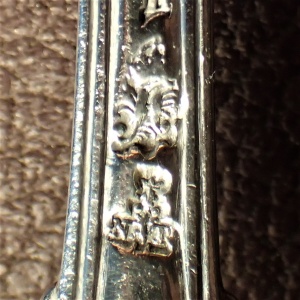 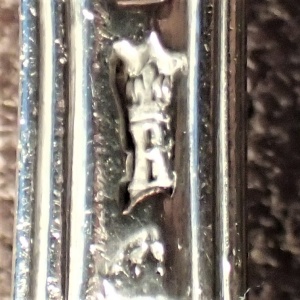 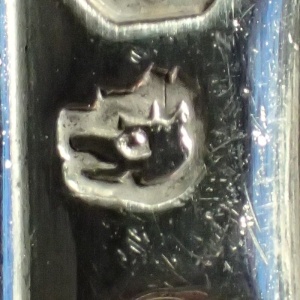 The bowl of the spoon is in beautiful ‘repercé’ motif showing a Rose Window cut out, in the Model # 4 used in Paris, but with a double helix.
The center decorated with teardrops and tulips while the rest of the bowl is decorated with acanthus, cornflower and tulip motifs.
The end of the handle shows a simple double line.
The work is exquisite and the piece is in excellent condition.
The handle bears a CD monogram.
A beautiful collector’s piece!
The width given above is that of the spoon’s bowl.

The Marks on this piece are huge, as the Monogram on the handle was done at a later date, hence the piece also show the 1st Rooster Mark for 1798/1809.

The Main Hallmarks are under the Fermiers Généraux régime (the Old Regime) for the city of Paris:
Photo # 6:
On the upper part of the photo you have Charges Mark for Paris in the shape of a crowned A, used under Fermier General Louis Robin, Starting October 1st 1738.
This Charge Mark ends in September of 1744.

On the lower part of the photo we have the Makers Mark for Nicolas Touraillon, who registered his Mark on April 30th 1739. He was sponsored by Maitre Orfevre Francois Midy.
His Mark shows a Crowned Fleur de Lys, 2 grains or dots, his initials surrounding a standing lion.
He first established his workshop Cour Lamoignon, then in 1759 moved to Rue Croix des Petits Champs. In 1776 he is listed Enceinte du Palais, and in 1783 Quai des Orfevres,
We loose his trace after 1783.

Taking in account all the Mark we can date our spoon to 1742.