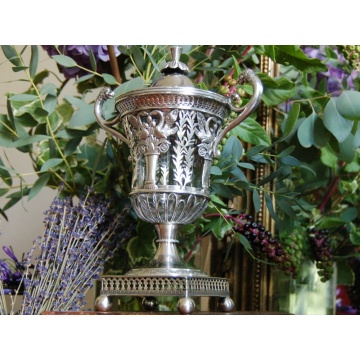 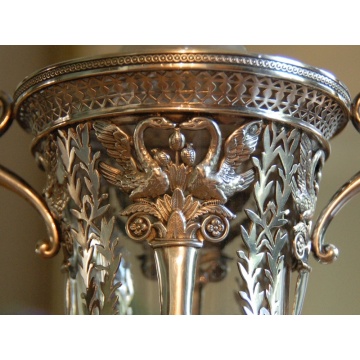 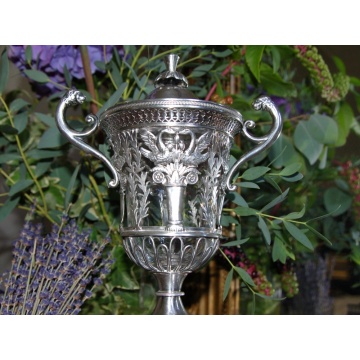 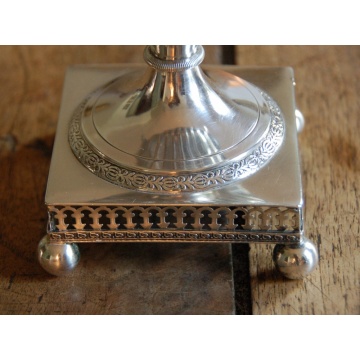 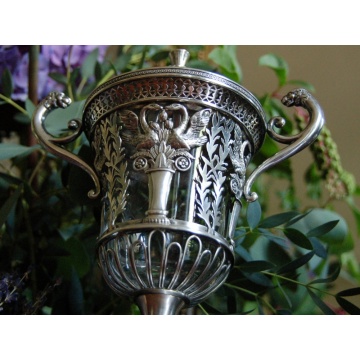 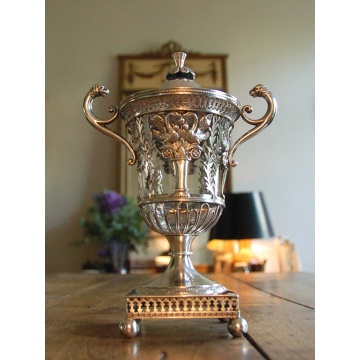 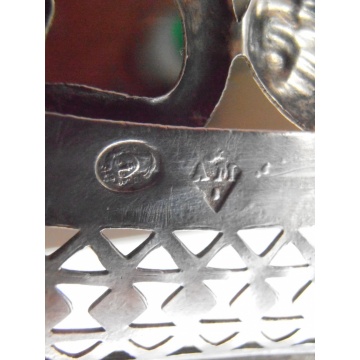 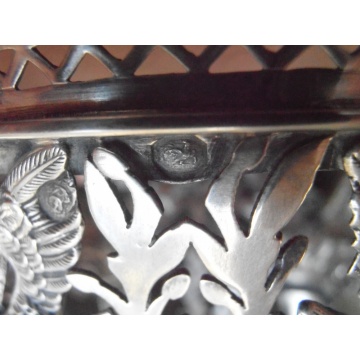 A Beautiful Antique French Silver and Crystal ‘Drageoir’ by ‘Maitre Orfèvre’ Ambroise MIGNEROT
In France we call them ‘Drageoir’ or ‘Confiturier’, but the only official name is a ‘Confiturier’ (Hence a Jam container), and we can confirm that originally they were only thought of, and used, as Ceremonial Sugar Bowls.

The body of this gorgeous Drageoir is Baluster shaped (or Medicis Vase Shaped) with four Figural ‘Tableaux’ representing Two Swans feasting on Half opened Pomegrenates.
The Swans have outstretched wings and rest on a pedestal decorated with finely carved palm fronds and two rosettes.
The details of the wings are absolutely exquisite! Each of the Swans is marked by the Haed of a Greek women Hallmark used between the years 1797 & 1798.
Each register is separated from the next by a two olive branches.
The upper register of the ‘Drageoir’ is beautifully lined with a geometric fringe while the upper border shows a silver pearl border.

The lower fringe of the piece shows geometric designs widely used by Mignerot and by Garreau after him during the Empire Era.
The pedestal is square resting on four round pearls of silver and decorated with stylized palmettos, with the lowest register shows delicately carved leaves.
The round central part of the pedestal is decorated by a floral wreath.
The ‘Frétel’ (or finial) is quite rare but widely used by Mignerot, it shows a tiny Palm tree the palm fronds nicely etched.
The bowl insert is white crystal it is original, and in perfect shape, no dents or marks.
The piece is absolutely lovely!

A wonderful detail for the collectors: The piece is marked with what is known as a ‘Head of Greek Women’ with the letter P on the left hand side…
This is a hallmark that was used during the Revolution between 1793 and 1794 in Paris, which would mean that Ambroise Mignerot would have designed the piece earlier and then re introduced it in 1809.