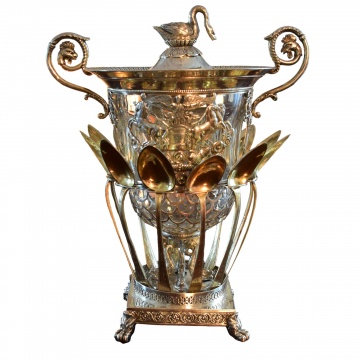 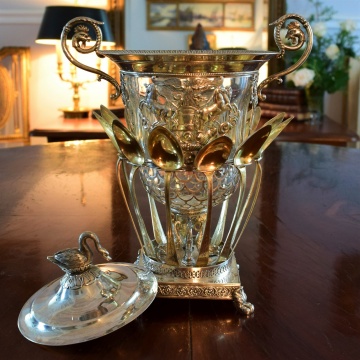 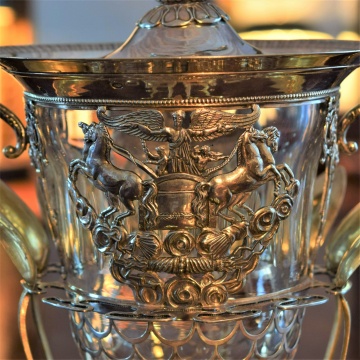 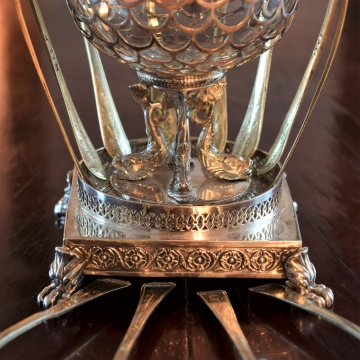 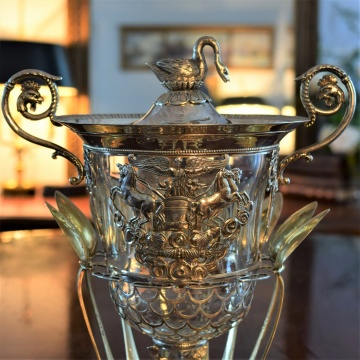 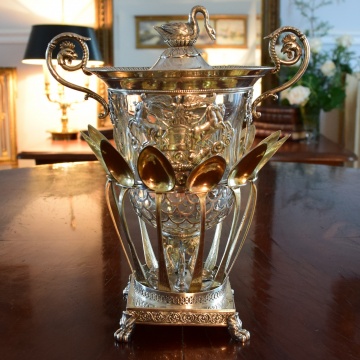 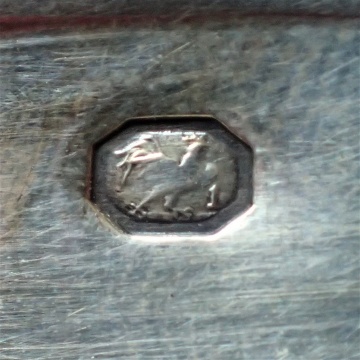 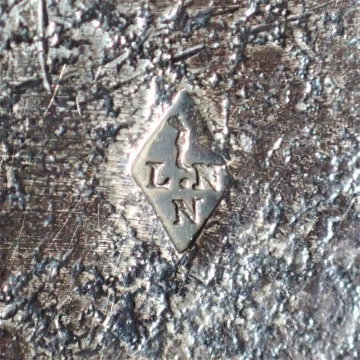 Though the name indicates a connotation of Jam, it is a magnificent Sugar bowl with its individual spoons around it.
This lovely Ceremonial Sugar bowl is exceptional in its décor.

Though we have been collecting Confiturier for a while, this is the first time we have come across this model…
It houses a cut Crystal interior, and rests on a square base with four lions’ claws feet decorated with scrolls and foliage.
In the form of a Medici vase with its original cut crystal interior it rests on a square base with four claw feet with scrolls.
The Medici vase itself is held aloft by four dolphins that are delicately chiseled.
The center register is quite unique! It showcases a relief found in Ephesus, showing the Sun’s chariot being driven by a winged Victory, holding the reins of four galloping steeds.
The details are simply gorgeous….
The handles are another surprise, featuring the heads of roosters…
The slightly domed lid is topped by a swan.
The lower part of the Confiturier is decorated with a lattice of silver scales.
It is truly beautiful…

The lower part of the Medici vase has an openwork network allowing twelve spoons to slide in.

The Particularity of these pieces, is that the Maître Orfèvre who did the main object, did not create the spoons…The spoons were always ordered from a ‘Cuilleriste’ (Or Spoon Maker) who specialized in them.
The twelve spoons share the same ‘Poinçon au Second coq or 2nd Rooster Hallmark. The Spoon Maker was Philippe Louis Minot who registered his Mark on October 20th 1807.

The Maker’s Mark is for LN Naudin or Louis Naudin Fils.
It shows his initials are separated by a Leg.
His marked was registered in 1812, under number 1558 in Paris.
His workshop was located 24 Place de Thionville in Paris.