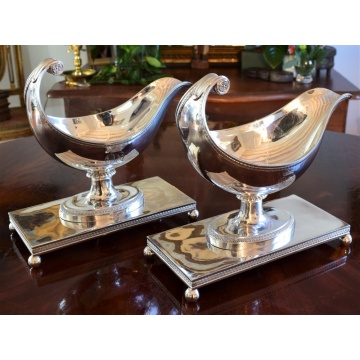 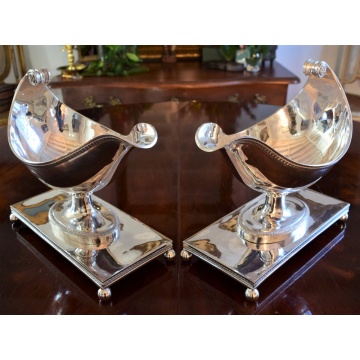 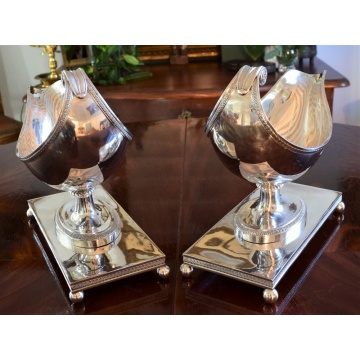 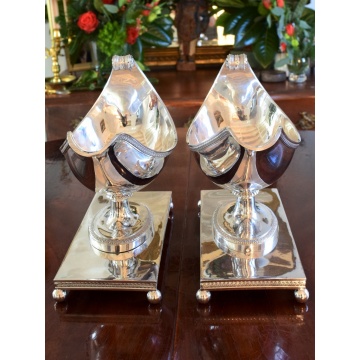 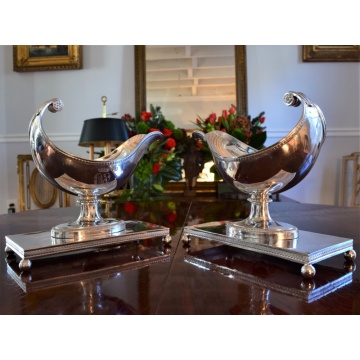 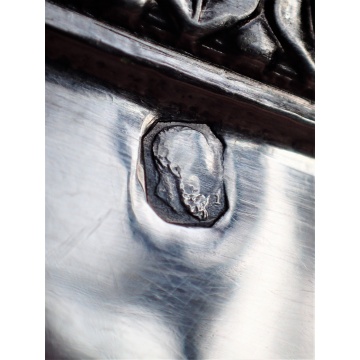 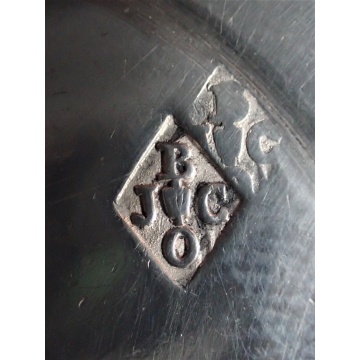 Oftentimes you fall in love with pieces and this is definitely one of those moments….
These two gorgeous Sauce Boats are incredibly elegant!
Both have their matching removable square undertrays, accented by spokes of heart and resting on four silver balls.
The Dish itself rests on a raised oval pedestal lined by the same spokes of hearts. The same motif graces the upper part of the dish.
The Handles is a simple curlicue decorated with a rosettes and just very lightly ‘guilloche’.

Though coming a little later then the Empire time, these two pieces are exquisitely representative of the Empire Style in its most elegant expression!
The pieces are perfect in their balance and style.
They both bear Coat Of Arms of Alliance topped by Baronet Crown.
They sit beautifully on a table, and are quite impressive in size.
These two pieces came from a Private collection in Paris.

Jean Baptiste Claude ODIOT’s Makers Mark shows a J, a B, a C, and an O in a lozenge Mark. He was received Master in Paris on December 17th 1785, then after the French Revolution in 1801. His Mark was cancelled on September 7th 1826, and he passed away in 1850.
He succeeded his father Jean Claude ODIOT who had in turn inherited the business from his father, Jean Baptiste Gaspard ODIOT creator of the family business in 1650 and Silversmith to Louis XV. After the father’s death in 1788 Jean Baptiste Claude ODIOT had to face the hardship of the revolution years, and was so much impacted by the revolution and the law banning exportation of silver items in 1792 that he had to join the army until 1801. He then re ignited his career and went on to become NAPOLEON’s favorite Maitre Orfèvre (along with Biennais). He created the Coronation Sword and Sceptre used by Napoleon. He was also the maker of the Silver and Gold service used by the Imperial Family and even created the Imperial Cradle for Napoleon’s son (the King of Rome), as well as Napoleon’s campaign dinner service.

As one of his first assignement he was mandated by Thomas Jefferson to create several pieces. He went on to acquire an amazing reputation and received special orders from all the European Courts as well as those of the Middle East and India. He was succeeded by his son, then his grandson with the final direct descendant Jean Baptiste Gustave ODIOT creating a joint company with 2 other ‘Maitres Orfèvres’ in 1906. During all the successions, what made the ODIOT Name a household name was the amazing talent they possessed that enabled them to be precursors but also to observe and create the trends that would lead the market. One of the last creations done by the great grand son Gustave ODIOT was an amazing request put through by the Royal House of Egypt and Said Pacha for a 3000 pieces Gold service set.

Today the House of ODIOT still stands at 7, Place de la Madeleine Paris. If you ever visit the Père Lachaise Cemetery Jean Baptiste Claude ODIOT was laid to rest in the 4th division.