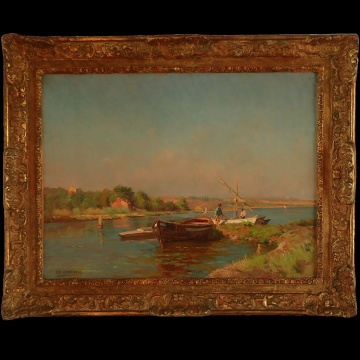 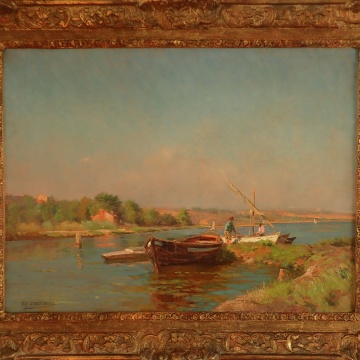 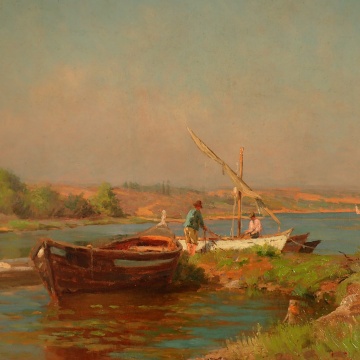 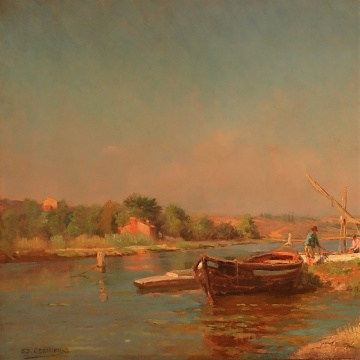 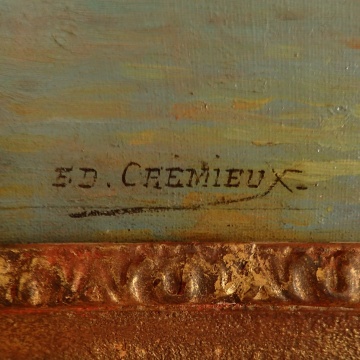 Boats On The Small Rhône By Édouard Salomon Crémieux

Édouard Salomon Crémieux was born in Marseilles in 1856. He began his training as a painter in the studio of Marin Guindon in Marseilles, then went to Paris where he joined the École des Beaux-Arts with Fernand Cormon as his teacher.
It was in the latter’s studio that Crémieux met Toulouse-Lautrec and Van Gogh.

An Academic painter during this period, he opened a studio in 1882, became a professor at the École des Beaux-Arts and a member of the Académie des Beaux-Arts.
Then he decided to return to his native city and set up his studio on Quai Rive-Neuve.
From then on, his style changed, he was inspired by Provence and its warm and colorful atmosphere which helped develop his color palette.
He produced seascapes, landscapes of the Provencal South and daily scenes of Marseilles life, always careful to render the light and intensity of colors.
A methodical and diligent painter, his works reflect an exquisite softness of execution tending towards poetry.
He participated in regional Salons where he won numerous prizes, as well as in Parisian salons, including the Salon de Artistes Français from 1884 to 1912, obtaining a 3rd class medal in 1895.

In April 1944, at the age of 88, Édouard Crémieux and his wife were arrested and transferred to Drancy, from where a convoy to Auschwitz departed. They were executed upon their arrival in May 1944.

Our painting represents a scene of fishermen preparing their nets near their boats on the banks of the small Rhône river, south of Arles.
A scene of daily life as he liked to treat them, bucolic and peaceful on the banks of a lazy river.
The importance of the sky, which occupies the upper 2/3 of the canvas, gives us all its light and reminds us of the summer skies of Provence.
This particular lighting brings out sharp colors, the blue of the river, speckled with the green of the seaweed and some touches of ochre reflecting the walls of the cottage and the hill in the distance.

The whole work is treated with an infinite delicacy, without sparing embellishment, only the grass in the foreground and the trees on the left receive a little more material, as if to give them life under the effect of a light breeze.

It is all the sensitivity and identity of Édouard Crémieux that shines through in this painting, a work of great quality.