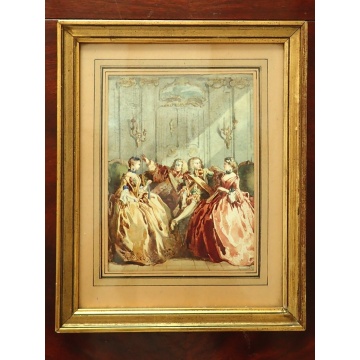 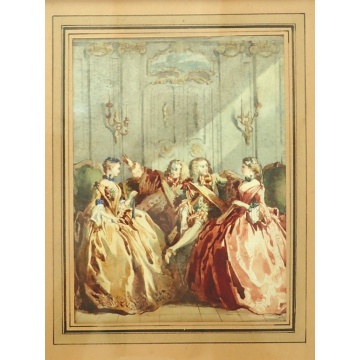 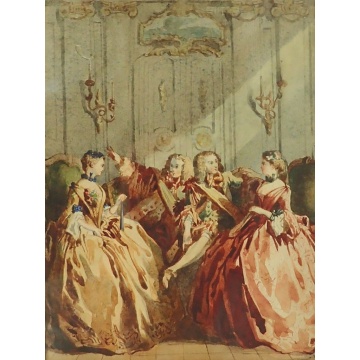 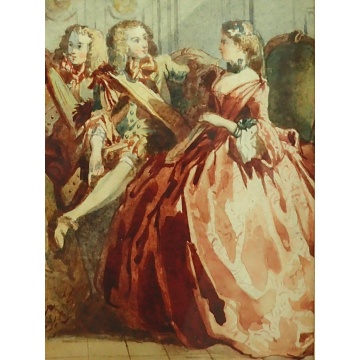 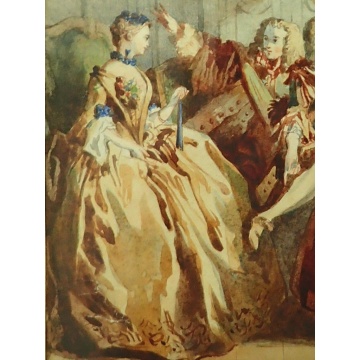 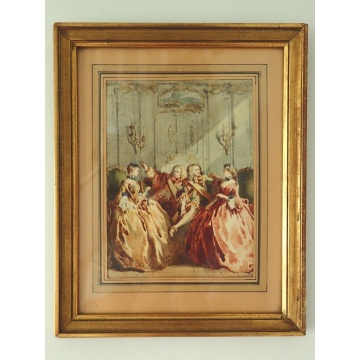 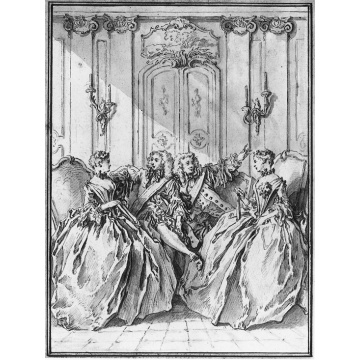 Charming Watercolour Composition Of Les Précieuses Ridicules By Héloïse Leloir.
This lovely Watercolour painting is directly taken from the Original Ink and grey was painting by Francois BOUCHER that can be found at the Bibliotheque Nationale de France in Paris, and which we have listed as photo number 7.

François BOUCHER realized it to illustrate Molière’s manuscript:‘Les Précieuses Ridicules’. This play which literally means ‘The Affected Young Ladies’, is a one act satyre and a biting comedy on manners by Molière.
It was first played in the provinces before being presented in November 1659 to the Parisians.
It was highly successful and attracted the patronage of Louis XIV to Molière and company.

‘Les Précieuses’ are Magdelon and Cathos, two young women from the provinces who have come to Paris in search of love and Finesse of the mind.
Gorgibus, the father of Magdelon and uncle of Cathos, decides they should marry a pair of eminently eligible young men from the same town, but the two women find the men unrefined and ridicule them. The men vow to take revenge on Magdelon and Cathos.
On stage comes Mascarille, a young man who pretends to be a sophisticated man of the world. Magdelon falls in love with him. Next on stage comes another young man, Jodelet, with whom Cathos falls in love.
It is soon revealed that these two men, Mascarille and Jodelet, are impostors whose real identities are as the valets of the first two men who were scorned and rejected, and who devised this scheme to get even with the two young women.

In the painting the two women are represented in their drawing room during an intense conversation with the 2 valets.
Héloïse LELOIR faithfully drew in lovely shade of watercolours the scene first depicted by Francois BOUCHER.

Héloise (1820/1873) was the daughter of painter Alexandre Colin. She married artist Jean-Baptiste Auguste Leloir (1809-1892) and was the mother of Maurice Leloir, an artist who later became a film producer in Hollywood. Héloise Colin Leloir is known as a miniaturist and watercolorist, but also for her works in the fashion industry as an artist executing beautiful watercolors of the latest Paris gowns to be engraved and published in magazines with worldwide circulation.

This painting came from the personal collection of André COCHARD, a friend of the artist and was authentified by Mme Agnès SEVESTRE BARBE and Mr Amaury de LOUVENCOURT (experts).