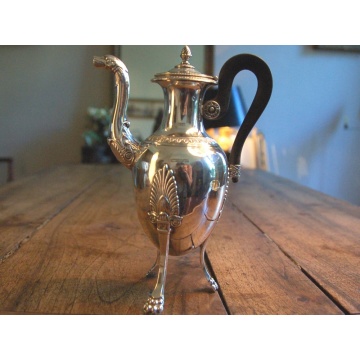 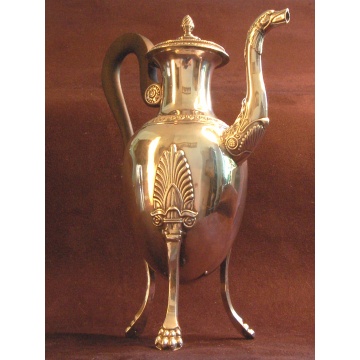 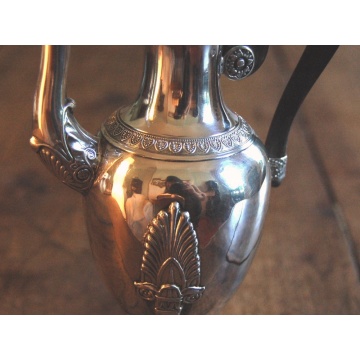 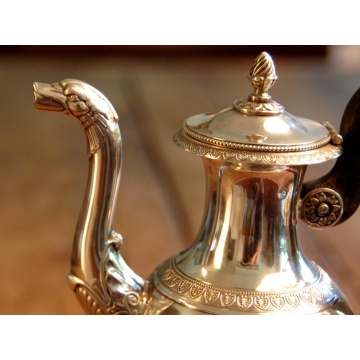 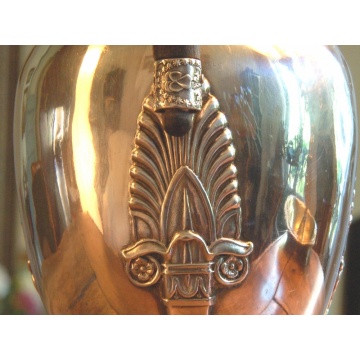 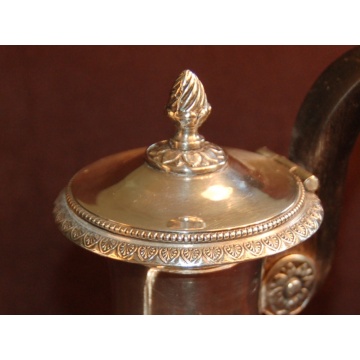 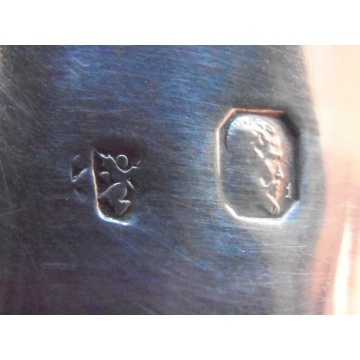 A Charming French Antique Silver ‘Selfish’ Coffee Pot in the very refined ‘Directory Style’ by ‘Maître Orfèvre’ Pierre Jacques MEURICE.
Later continued by the Empire Style, the Directory Style started right after the revolution, after years of struggles and loss of workmanship.
The designs were rather simple and elegant, with pure details and heralded the use of Antique symbols brought back by the French expedition in Egypt, and later heavily used in the Empire Style.

This lovely French Antique Silver Coffee Pot is called ‘Egoïste’ or Selfish in French as it holds roughly 5/4 Espressos or 2 larger coffees but no more! Hence the connotation of Selfish!

The design is extremely pure with the ebony handle fitting perfectly and giving a very clean line, while inked to the pot by a delicately silver sunflower on one end and a pansy decorating the holding band on the other side.
The Spout is lovely, showcasing a ‘zoomorphic’ design representing a swan’s head. The bottom part of the spout is worked with an acanthus leaf design, floral scrolls and rosettes.
The Finial, or ‘Frétel’, is in the form of a nut, resting on a top of an laurel leaf wreath, while the edges of the lid are carved with a of acanthus leaves.
The body of the coffee pot showcases another wreath of acanthus leaves.

The coffee pot rests on three feet extending in delicately carved lion’s paws.
The feet connect with the body of the pot with a lovely Palmetto design flanked by rosettes.

The Hallmark is Poinçon Vieillard (or Michael Ange) 1 -1st title (950/1000)- 1819 to 1838 – Paris
Another wonderful detail for the collectors: The piece is also marked with what is known as a ‘Head of Greek Women’ with the letter P on the left hand side.
This is a hallmark that was used during the Revolution between 1793 and 1794, which would mean that this might have been an earlier piece taken back by MEURICE. It could be very well be one of his earlier works since he had started practising prior to obtaining his master, in the late 1790…

But here is the best part!
The Maker’s Mark is for Pierre Jacques MEURICE. One of the Star Maitre Orfèvre of his time! The Mark shows a P and an M on both sides of a spear of wheat, resting on top of a crescent.
Pierre Jacques MEURICE was received as Master in 1806 and established his shop at 12 Cloitre Notre Dame, he then moved in 1811 to the Arcade St Jean very close to the Hotel De Ville de Paris, and finally stepped down in 1828.

If the name sounds familiar, it is because we have already spoken about him.
He is the Stepfather to Francois Desire FROMENT, who he would take under his wing, highly influencing his work and to whom he would eventually turn his workshop to in 1828. To honour his stepfather Francois Desire FROMENT would take up his name and really rerached the height of his fame as FROMENT MEURICE starting 1839!