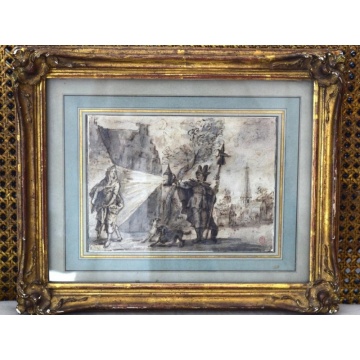 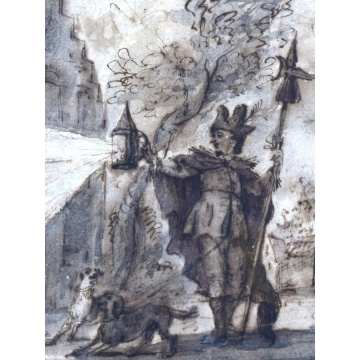 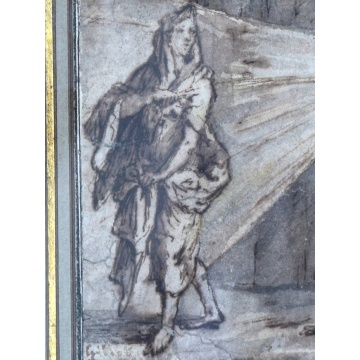 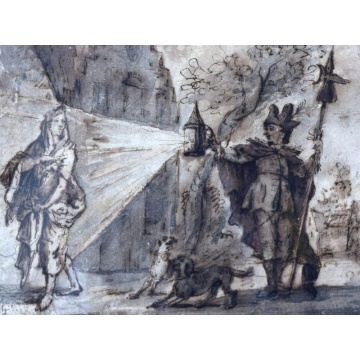 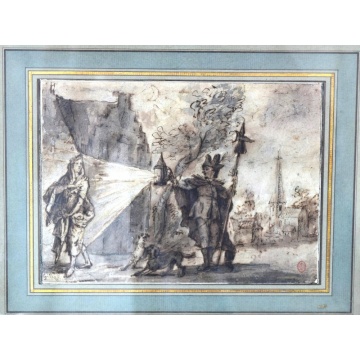 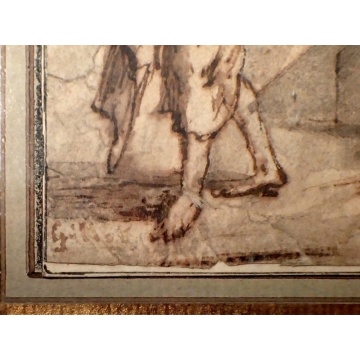 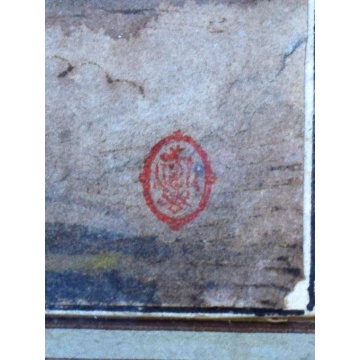 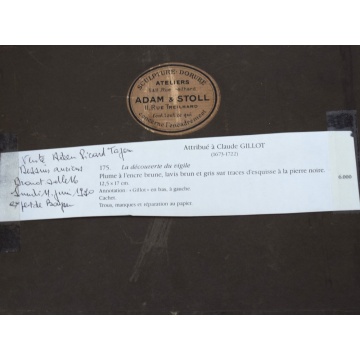 This charming study uses what is called the 3 inks or pencils technique.
In our drawing the artist used black and brown ink as well as black pencil, highlighted by a brown and grey wash.

To the left of the Drawing in very faint brown ink you can distinguish the name ‘Guillot’.The ink appears to be the same as the one used on the drawing.Photo #6.

The drawing shows a Vigil dressed in 17th century clothing with a hat and a cape holding in one hand a lance and in the other a lantern and flanked by his two dogs.
He is shining his lantern onto the figure of the person he has just discovered during his night round, which appears to be a woman.

This study was attributed to Claude GUILLOT and was part of Victor DESEGLISE’s private collection (His stamp shows on the lower right hand corner of the panel. It bears his numbering system in Lugt # L.356.c. Photo # 7.
Victor DESEGLISE was born in 1839 in Issoudun and was considered a keen collector of drawings and books which he kept in his house in Frapesle.
He was most known for his friendship with the Goncourt family.
His collection was mostly dispersed over 3 auction which took place in 1896, 1921 and 1929.

This piece was acquired at the Hotel des Ventes Giraudeau in Tours in 2017 under # 662.
Originally the piece was sold under the # 175 during the Ader /Picard /Tajan Auction that took place on June 11th 1990 in Paris at Drouot. The Evaluation and note is still on the back of the drawing. Photo # 8.
The attribution to Claude GILLOT was done by the Cabinet De Bayser at that time.

Claude guillot (April 27 1673 – May 4th 1722) was a French painter, engraver and book illustrator born in Langres and designer, known for having been the teacher or Watteau and Lancret.
He was known for his ‘Scenes Champetres’ or ‘Pastoral Scenes’ and later work on the Theater Decors and drawings