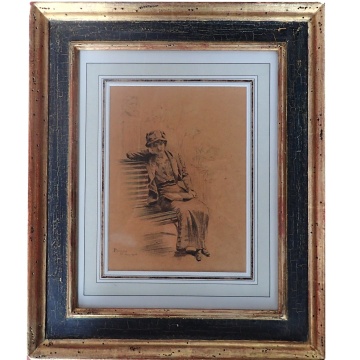 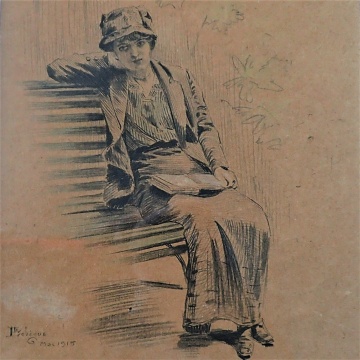 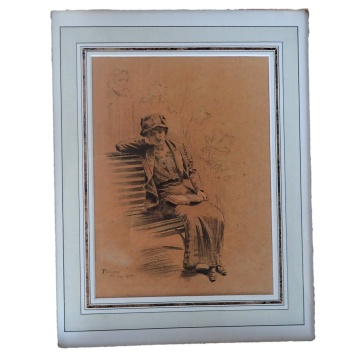 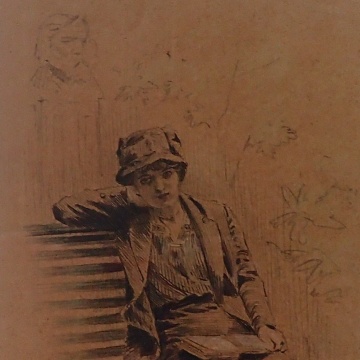 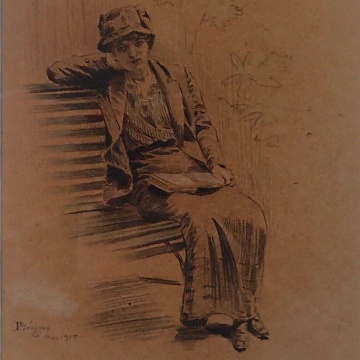 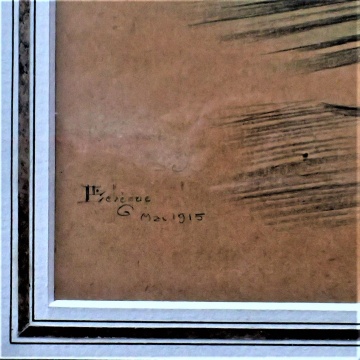 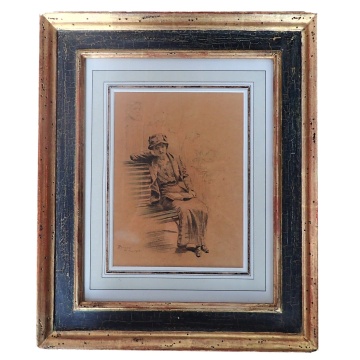 A Charming Black Ink and Pencil Drawing Of a seated woman reading in a park by French Draughtsman Léon Lebègue.

Dated May 1915, 15 years prior to his passing this lovely drawing is typical of Léon Lebègue’s talent.
The young lady faces the artist, having left her book open on her knees and seems to be daydreaming…
Above and behind her appears the stern statue representing the bust of a man, while vegetation around it is only drawn in shadows.
The wood bench she sits on is typical of the ones found in the Parisian City parks….The drawing is light full of poesy and delicacy.

Léon Lebègue, was born in Orléans (Loiret) on November 7, 1863 and died in Le Mans on May 17, 1930 and was a French lithographer, engraver, poster artist and illustrator.
He began his career in Paris, around 1885, with Paul-Alfred Colin, then inspector of Fine Arts who had spotted him while he was taking drawing classes in Le Mans.
Colin allowed him to follow the courses of the painter Jean-Léon Gérôme at the Beaux-Arts de Paris.
In the 1890s he began a career as an illustrator for satirical and artistic newspapers: Soleil du Dimanche, Le Rire, La Plume, Le Gaulois, La Vie en rose, Au Quartier Latin, Le Patriote Illustré, Le Cycle, La Revue moderne, Grimace, Nos Caricatures, L’Illustré national, Gil Blas illustré, Le Courrier français, Le Goût parisien, La Critique.
He also created numerous illustrated book covers, bookplates, and the illustrations for numerous literary works.
Lebègue is notably known for having realized numerous advertising posters of which that of the Paris Salon.
He exhibited at the Salon des artistes français from 1901 to 1905 and died in Le Mans on May 17, 1930, at the age of 66.
Enamored, like Achille Devéria with Romanticism, and with Art Nouveau, Léon Lebègue gave with profusion, the measure of an inventive, playful and charming spirit. The pretty, the light, the infinitely small in the ornament attracted him.
The illustrated periodicals competed for the always happy finds of this spiritual and erudite artist.

Our drawing is signed and dated on the lower left hand quarter.
It was part of the wonderful Jacques and Colette Ulmann collection of drawings which sold earlier this year.