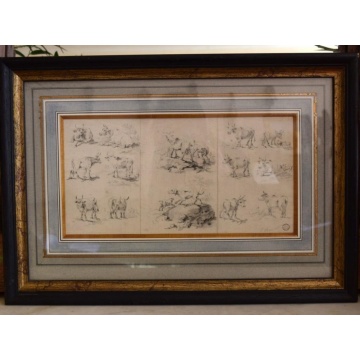 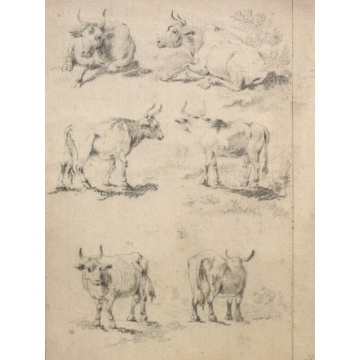 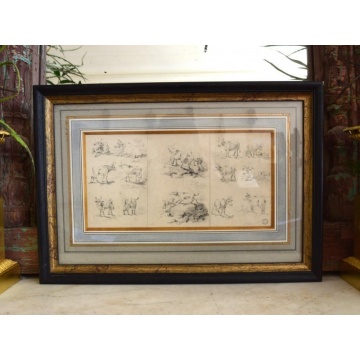 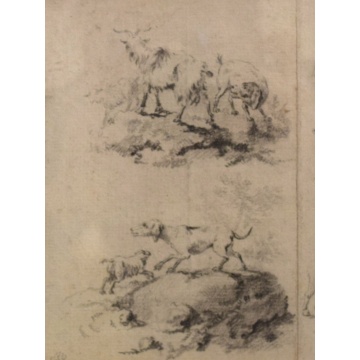 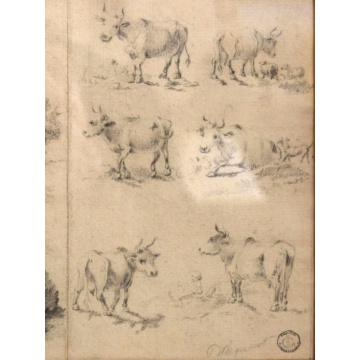 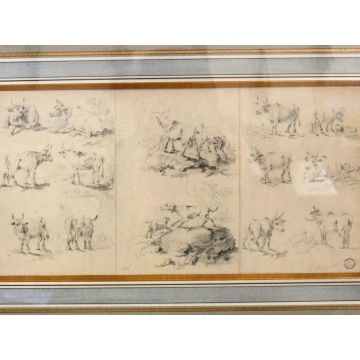 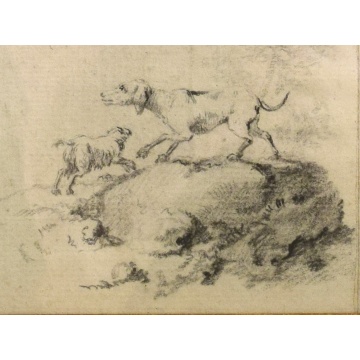 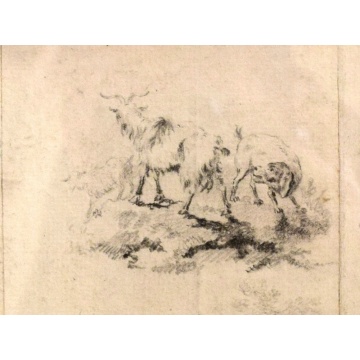 This charming study comprises three different panels that have been put together under one single glassed frame.

The first and last panels show a study of several cows walking and resting in a field.
The second has a studay of sheep dogs and a ram facing off on a little hill.
The animals are very well drawn, extremely lively and delicately rendered.

This study was attributed to Jean Baptiste PILLEMENT and was part of Carlo LUCIDO’S collection (His stamp shows on the lower right hand corner of the panels and bears his numbering system in Lugt # 3269).
Pillement is also hand written on the piece.
This piece was acquired at the Berard/Peron /Schingten Maison de Vente in Lyon under # 14.

Jean-Baptiste Pillement (24 May 1728 – 26 April 1808) was a painter and designer, known for his exquisite and delicate landscapes, and whose importance lies primarily in the engravings done after his drawings, and their influence in spreading the Rocaille or Rococo style and particularly the taste for Chinoiserie throughout Europe.

Pillement had an unusually cosmopolitan career. He was born and died in Lyon. In 1743, at the age of 15, he moved from Lyon to Paris where he was employed as an apprentice designer at the Gobelin factory. In 1745 he left for Spain, where he remained for 5 years.

There he found employment in various cities as both a designer and painter. A landscape dated 1748 reveals rustic themes he was to repeat often: sun bathed shepherds leading their goats and sheep to a cascading stream, a water mill, rocky elevations covered in lush vegetation, or animals depicted grazing in on hilly mountainsides.. In 1750, at the age of 22, he moved to Lisbon and onwards to London by 1754.

Pillement then spent eight years in England, fully exploiting the English taste for landscapes. In 1763 he traveled to Vienna , then Poland and St Petersburg returning to France in 1768 where later he would work for Marie Antoinette at the Petit Trianon.
He returned to Lyon in 1800 staying there until his death in 1808.