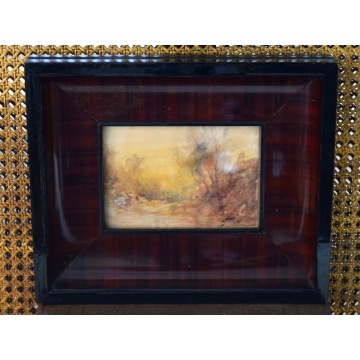 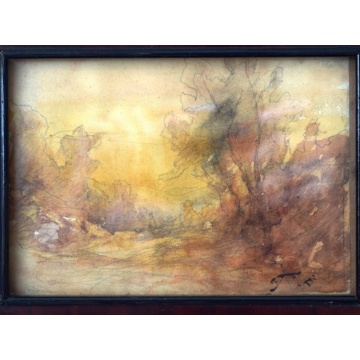 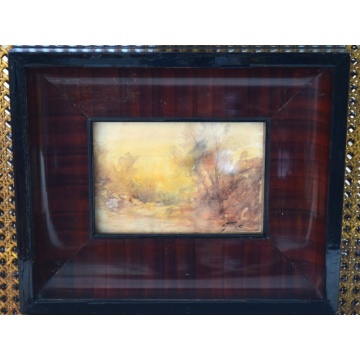 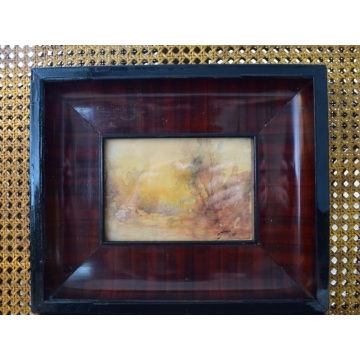 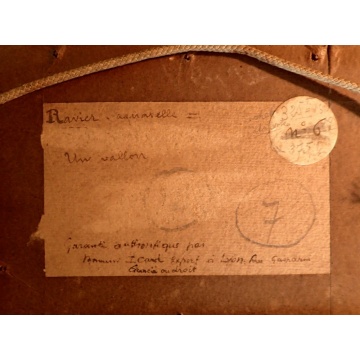 Delicate Watercolor Of A Vale By François Auguste Ravier~Sold~

Delicate watercolor representation of a Vale By François Auguste RAVIER.

Painted in the lightest of ochre’s and transparent grey colors, this little watercolor probably represents the Vale close to Morestel that was one of Ravier’s favorite spots to paint.

François Auguste RAVIER was born in Lyon in May 1814 and passed away in Morestel on June 26th 1895.
Having first started Law School RAVIER very rapidly abandoned it to pursue his artistic whim and embarked on a successful Painting carrer.

Under his Art teacher, Theodore Caruelle D’ALIGNY, he befriended Jean Baptiste Camille COROT and Charles Francois DAUBIGNY. After traveling and meeting Dominique INGRES in Rome he returned to settle in Cremieu in 1850 then in Morestel in 1868 seduced by the beauty and the light of the countryside.

He welcome many of his fellow painters and gave his advice freely to a host of young talents. These artists would eventually go on to create the School of Morestel.
A gradual loss of sight would unfortunately, in his later years, take away his ability to paint and his views of his lovely surroundings.
He was a avid follower of Turner, preferring the use of colors in a simple play of light and shadows to the perspective of lines and structure.
In this domain he can be considered as one of the precursors of Impressionism

This charming painting is typical of his watercolors, barely using some pencil outlines and prefering to make a show of the different ochres and reds to communicate the scenery.

Renaud ICARD was a sculptor, writer and owner of an Art Galery in Lyon in 1930 despite graduating (very much like Ravier) from a Law School.
Prior to 1930 he had even dabbled with book writing with a certain success.
His Gallery ‘L’Art Francais’ was well known and he befriended among others: Paul Claudel, Henri de Montherlant, but also claimed as friends: Andre Gide and Jean Cocteau.
He went on to create the Salon des Jeunes who specialized in exhibiting the work of the younger artists.
In 1937 Icard wrote a play that stood as an avant garde work on the Homoparental Family front…He gained quite a few followers but was shunned by part of the society due to his hidden sexual orientation despite being married and having 4 children with his wife.
He passed away in 1971.

The little watercolour no doubt was one of the paintings he exhibited at one point in his gallery.

The Painting was authentified as well by Olivier HOUG, expert in XIX paintings in Lyon.
It was acquired at the Berard Peron Schintgen SVV in 2016 in Lyon under # 24