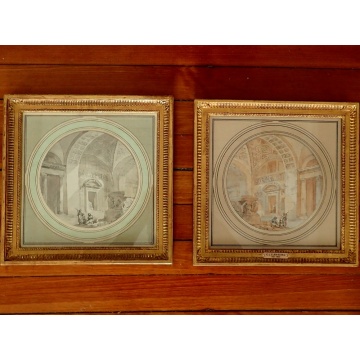 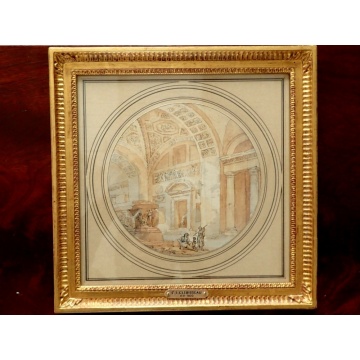 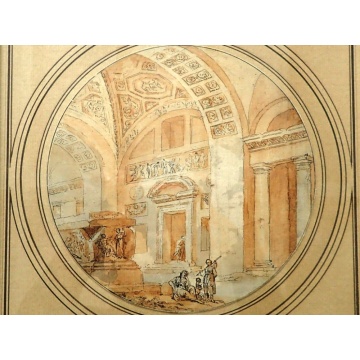 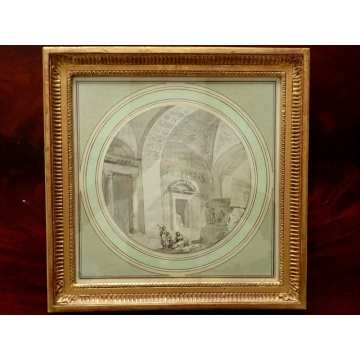 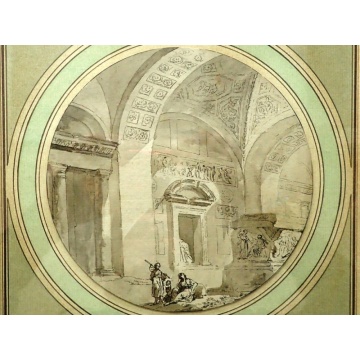 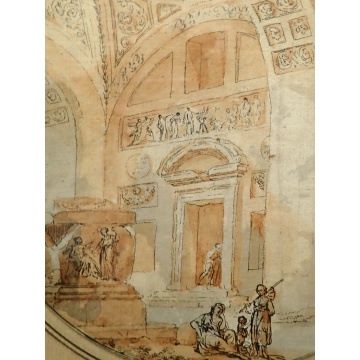 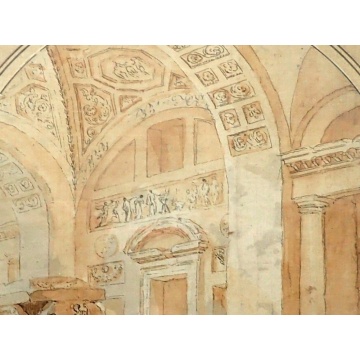 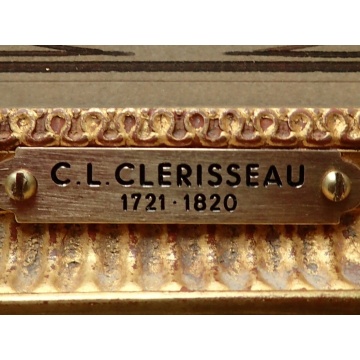 The ‘Tondo’ composition in Sepia tones we present here, is actually a drawing, while the second ‘tondo’ is interestingly a reverse print of the same.

Sunlight bathing giant columns was a common motif in Clérisseau’s work, and for good reason. If we look carefully at this rendering, done in ink, sepia and brown wash, we can see that the lines are not as perfectly straight as they seem upon first glance. Clérisseau created palpable texture by enhancing the thickness of the columns with very warm earth tones to contrast with deeper colors in the shadows. Clérisseau was a master of creating a real sense of scale and majesty. He loved classical architecture and even his architectural Fantasies or ‘Caprice’ as they came to be known, invite us to take pure fantasy and make it real….

Charles Louis CLÉRISSEAU was a Paris-born draughtsman, scholar, and architect who studied under Giovanni Paolo Pannini the well known painter of ruins; Born in 1721 in Paris, he was also a student at the French Academy of Rome which he left in 1754 after quarrelling with its director, Natoire.

His importance was as a teacher and artist-archaeologist who had a profound effect on the evolution of Neo-Classicism. He instructed James and Robert Adam in draughtsmanship, and assisted in the survey of Diocletian’s Palace at Spalato, later supervising the engraving of the plates for Adam’s Ruins of the Palace of the Emperor Diocletian at Spalatro in Dalmatia published in 1764.
He helped guide the developing taste for the Antique in young French and British artists and gentlemen amateurs on the ‘Grand Tour’ as it was called and served as a mentor to many.
He also gave lessons in drawing to Chambers, and knew or met many important architectural personalities of the time, including Piranesi and Erdmannsdorff. More than his relatively few realized works (per exemple: the Palais du Gouverneur, Metz, France (1776–89 ), his many drawings of Antique decorative schemes and details, real and imaginary ruins, and designs for buildings in the Ancient style helped to form the language of Neo-Classicism.
Later, he produced design-drawings for a ‘Roman villa’ (unrealized) for the Empress Catherine of Russia (1762–96), and also advised Jefferson on the design of the Virginia State Capitol. He published ‘Monuments de Nismes’ in 1778 as Part I of ‘Antiquités de la France’.

The largest collection of his drawings in the Musee de l’Hermitage in St Petersburg.
Despite his extensive travels, he passed away in January of 1820 in Auteuil, which is today in the 16ieme arrondissement of Paris, but was at the time considered as one of the surrounding villages.

The ‘Caprice’ shown here balances the beautiful arches with the stern yet elaborate details of the sarcophagus, and the figure seen in the distance in a majestic doorway seems to have dropped from the ‘sopraporte’ paiting….a world of fantasy, yet beautifully real…

Presented in baguettes early 19th century gilt wood frames the Drawing and its Print will make a delightful compliment to a Study or a Library.

The Frames measure: 11.75 x 11.75; the drawing measures 7 inches in diameter.
The Drawing and its print were acquired in Paris in April 2018