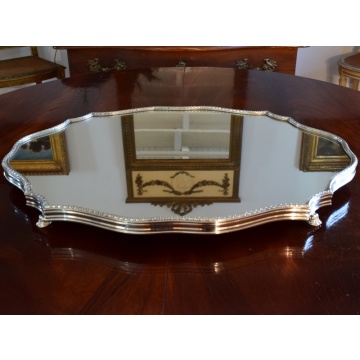 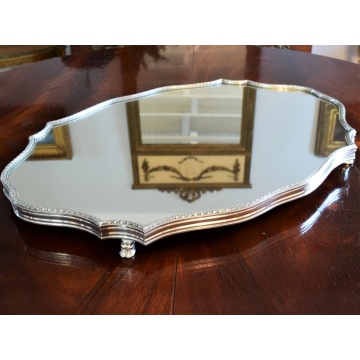 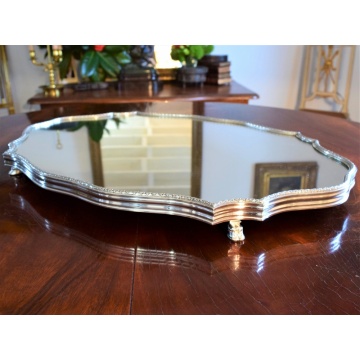 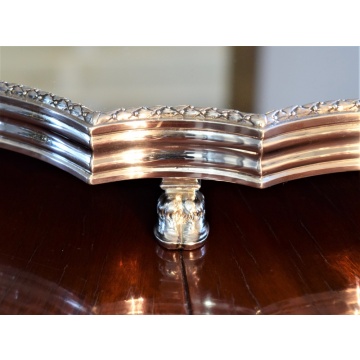 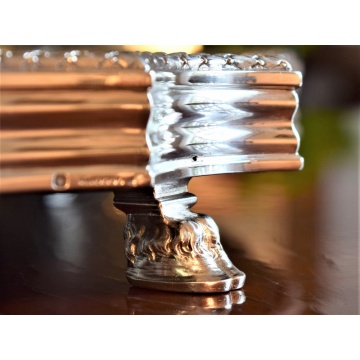 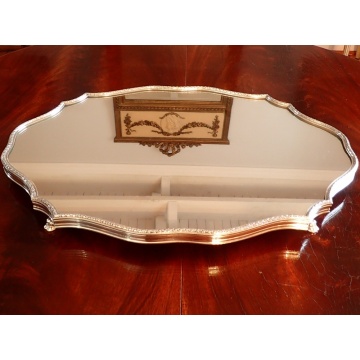 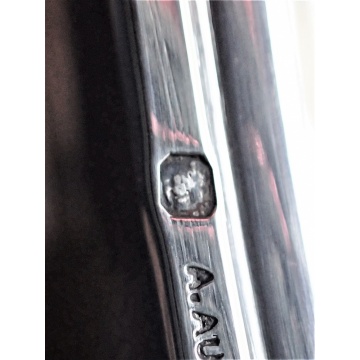 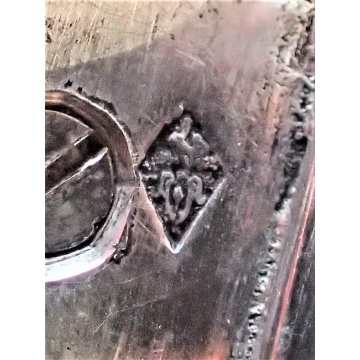 Lightly Oval shaped and scalloped the Surtout is done in the Louis XV Style, or Rocaille.
The Silver band lining the main plateau is decorated on top by a Laurel Taurus on the upper part while the side are show an elegant double filet line.
The 4 feet supporting the surtout are beautifully chiseled ‘pieds caprins’ or hooved feet.

The liner is done in mahogany and the mirror is the original one and is intact.
Upon opening the surtout to clean it, we found the date ‘Juillet 1900’ written on the reverse of the mahogany part! Hence we have a precise dating on the mounting and selling part.
The surtout was done to receive decorations in the center of the table, be it candelabras or fruit platters or desserts or flowers.
The mirror shows only one very light line.

The Makers Mark is for André AUCOC. It shows two A’s topped by a Rooster.
His first Mark was registered 1887 and cancelled in 1911.

The mark deserves a little more explanation’s as it was one of the most outstanding amongst the French Master Silversmiths.
Casimir AUCOC first registered his mark in 1821, and founded the company at 154 rue Saint Honore. The company then moved in 1835 to 6 rue de la Paix, where it stayed until 1911..
From 1836 to 1856 it was managed by Jean Baptiste AUCOC who had taken over from his father.
He was later followed by Louis AUCOC who took over starting 1856, before handing the management of the company to Andre AUCOC in 1887.
The company was famous for its outstanding larger pieces which beautifully and expertly reproduced the styles of the past centuries.
In 1839 it obtained its first silver medal in one of the first versions of the Universal Exposition to be held in Paris.
It continued collecting medals in 1844, then 1855 and 1867 at the Paris Universal Exposition.
Under André AUCOC the company took home the Gold medal in 1889 and 1900 and was one of the laureate at the Louisiana Purchase Exposition (more commonly known as the St Louis World Fair) in 1904 in Missouri!