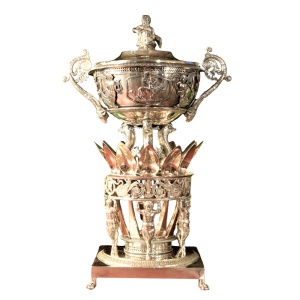 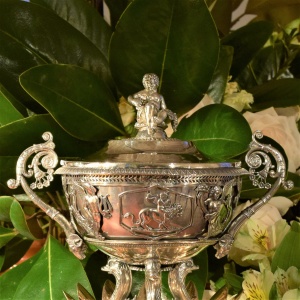 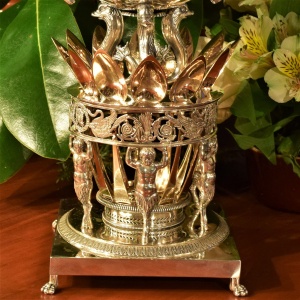 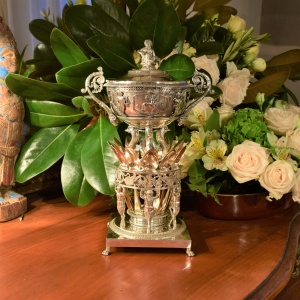 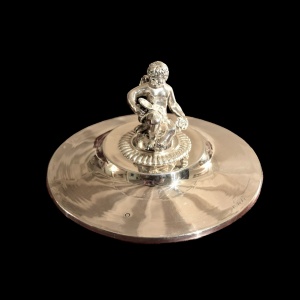 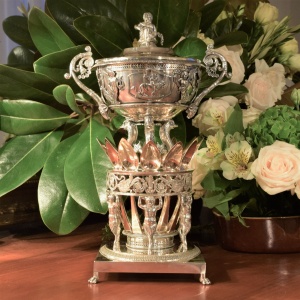 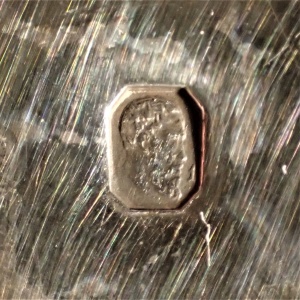 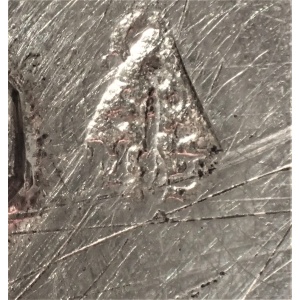 As already noted in other descriptions it appears however that originally these pieces were mostly used a ceremonial sugar bowl, though the term ‘Confiturier’ literally means Jam holder.

The work on this beauty is astounding, and perfectly in line with the Maker’s work.
Let us start by the upper part:
The silver lid has a beautiful finial in the shape of a young Bacchus resting on the world.

The upper register is a double circle of solid silver decorated by a geometric openwork gallery. The central part shows Bacchus in a center medallion riding on lion while playing the Lyra.
He is flanked by two winged sirens holding cornucopias, while the side registers are two delicately carved swans.
The handles are two lovely palmettos and rosettes decorated swirls. The lower end is deftly carved into a ram’s head.
The central register shows three tritons or dolphins standing on their tails.
The lower part is incredible with fauns supporting a gallery decorated with swans, rosettes, and Hermes’s representation. That central part holds the 12 gilt silver spoons
The pedestal on which the fauns stand, is square with a laurel leaf wreath. It rests on lions’ feet.
This is just a wonderful work of art!
It can also be put to use as a Beautiful Caviar Serving Bowl!! A gorgeous way to use it as a matter of fact…

The Particularity of these pieces, is that the Maitre Orfèvre who did the main object, did not create the spoons…
The spoons were always ordered from a Maitre Orfèvre who specialized in them, in this case Charles Salomon Mahler who registered his Mark in 1824.
The Width given above is taken at the Handles.
The silver weight on the piece is incredible, standing at 1.9 kilos…

The Maker’s Mark is for Marc JACQUART. His Mark shows an M and a J separated by a Thyrsus, otherwise known as a scepter surrounded by leaves. The symbol is of the attributes of Dionysus. Marc JACQUART registered his mark 1798, and cancelled it in 1829.
He practiced at 1 rue du Petit Pont in Paris and the Hotel d’Aligre at 123, rue de Saint Honoré.
His specialized in larger pieces or as per records: ‘Big and Beautiful Tableware’!
His pieces were found at the Imperial and Royal tables.