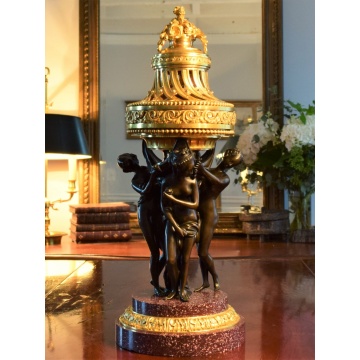 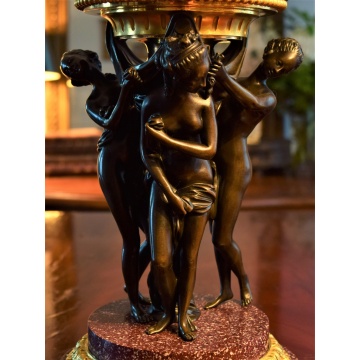 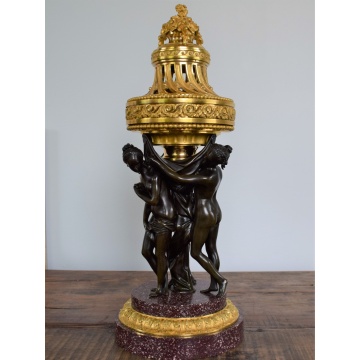 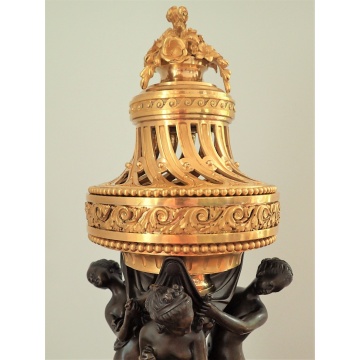 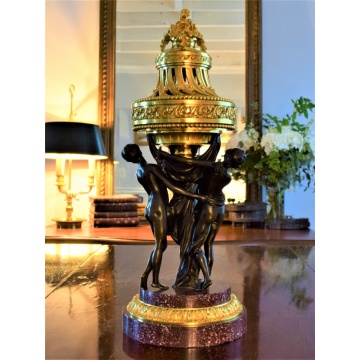 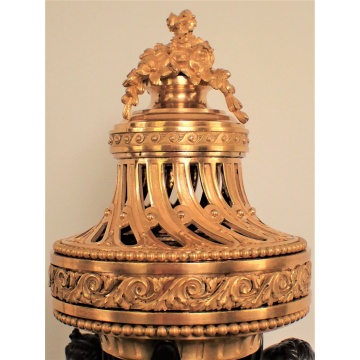 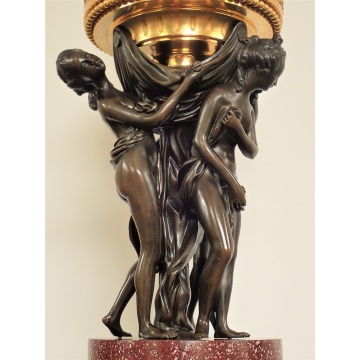 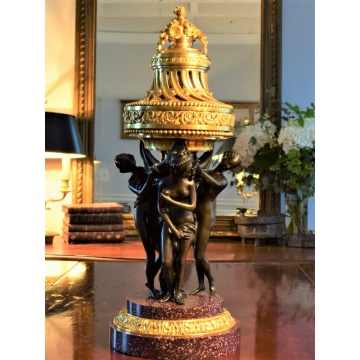 The upper part, open worked and decorated with foliage scrolls and garlands of flowers, is supported by three young women symbolizing the Graces in darker bronze.
The Three Graces stand on a double circular porphyry base surrounded by a gilded bronze with acanthus leaves.
The quality of the chiseling is exquisite, as is the work on the bronze Graces figures.
Though not signed, the refinement of the work indicates a wonderful maker.

What makes it particularly exceptional is the base in Porphyry….The Sacred stone….
Red Porphyry was extracted from the Porphyrites Mons or Mountains east of the Nile in the Oriental Desert.
Harder than granite it is capable of taking a much sharper polish and is more unalterable with time yet its hardness makes the work much more expensive.
The most expensive was the Egyptian Porphiry with white and pink crystals which is the one used on our statue.
This material in Ancient Egypt was reserved due to its indestructibility and its beauty to the representation of the Gods and the Royal Family in its divine form.
This stone was adopted as well by the Roman Empire with the Rulers organizing mining of the Porphyrites Mountains.
Emperor Domitian in 88-99 used this same stone for the decoration of the most precious rooms of his palace on Mount Palatin.
Emperor Constantin would use it extensively in Constantinople to accentuate the divine character of his new capital. Of the most emblematic monuments in Constantinople would be the square building topped by a pyramid whose walls were completely covered in Porphyry and were the Empresses came to give birth. The sacredness of the stone consecrated the newborn heir to the crown.
This material was also used in sacred architecture and in decorations related to ecclesiastical liturgy.
Porphyry then became part of a new conception of the Empire as an entity of divine origin, governed by a man chosen by God.

The Provenance is also a wonderful treat.
This wonderful Pot Pourri was part of Georges GEFFROY’s collection.
Geffroy was France’s most glamorous interior designer of the mid 1900, a legend of French interior Décor, friend to many celebrities and royal houses as well as designers and decorators. Of which Hubert de Givenchy, but also Jean Rochas and Marcel Piguet and went on to decorate some of the most extraordinary properties.
Our wonderful Pot Pourri was sold on December 2nd 1971 following Geffroy’s passing for the sum of 41,000 French Francs.
And had remained in the same collection since.
Considered at the time as a Louis XVI item, it has since been revised to the Consulate Era.
It is an incredible piece, breathtaking in its beauty and perfection…