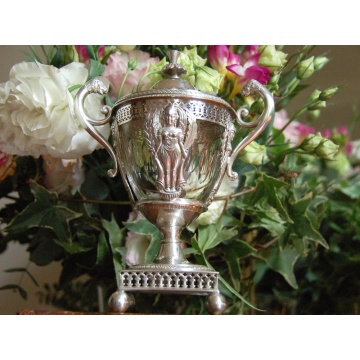 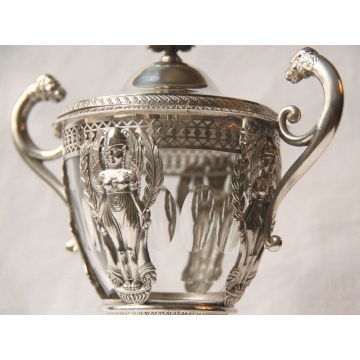 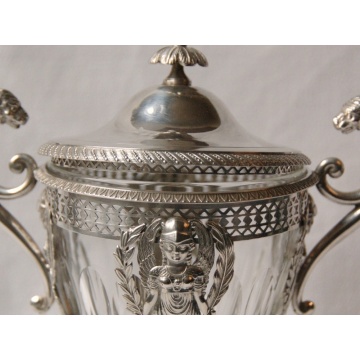 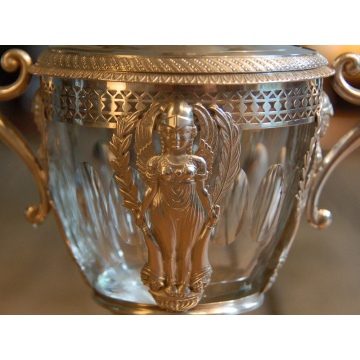 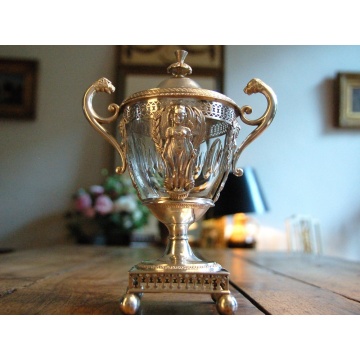 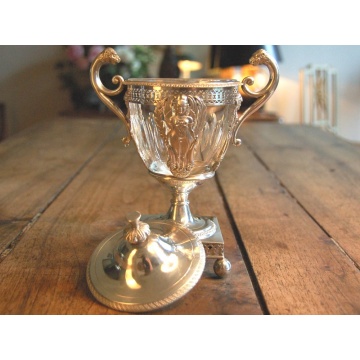 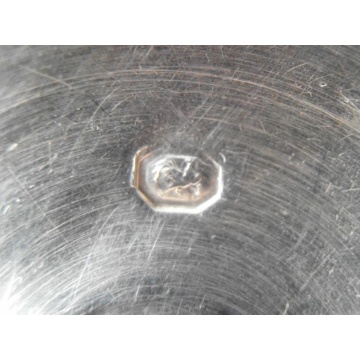 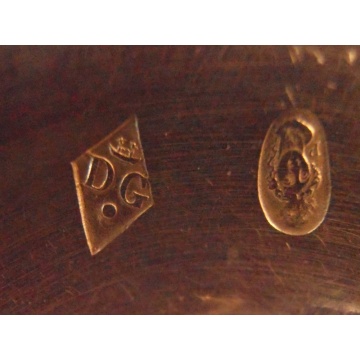 An exquisite Antique French Silver and Crystal ‘Drageoir’ by ‘Maitre Orfèvre’ Denis GARREAU who took over from another great ‘Maitre Orfèvre’ Ambroise Mignerot.
In France we call them ‘Drageoir’ or ‘Confiturier’, but the only official name is a ‘Confiturier’ (Hence a Jam container), and we can confirm that originally they were only thought of, and used, as Ceremonial Sugar Bowls.

The theme of this Drageoir is based on the Athena Myth…Allow us just a little background…
Athena is said to have been the daughter of Zeus and Metis. The myth implies that prior to the birth Ouranos informed Zeus that Metis’s offspring would claim his throne. A soon as he learned of this Zeus swallowed Metis whole! Subsequently developing horrible headaches, Zeus asked Hephaestus (the Blacksmith God) to strike his skull with a blade in order to stop the ache…
Hephaestus complied, and out of Zeus’s skull came out a fully grown Athena wearing a war helmet and holding a sword and a shield, which bore a representation of Medusa’s head.
Athena is said to have held her mother’s wisdom but her father’s strength. She would go on to become one of the 12 Main Gods of the Greek Olympus.
However she would also fight Poseidon for supreme power over Attica and would win by using her gift of wisdom. The Legend recounts that Poseidon struck the Acropolis and brought forth a beautiful white horse…But Athena decided to gift the locals with a beautiful Olive Tree symbol of peace and prosperity, winning over the Athenian who took her as their protector. She would also be known for her love of agriculture and is said to have invented the ploughing instruments to help develop Attica. Yet she is also her fathers’ daughter and is considered the Goddess of War.

The body of our little beauty is Baluster shaped with four Figural ‘Tableaux’ representing a beautifully clothed Athena.
The Goddess is wearing her helmet and has wings spreading behind her. She holds in her hands two inverted Cornucopias overflowing with fruits and flowers, testimony to her love and protection of Agriculture. From her left side sprouts an Olive branch as a memo to her gift to Attica and from her right side sprouts a Palm frond heralding her protection of Nature.
She stands on an inverted Shield the serpents that make Medusa’s hair showing underneath her feet!
The draping of the cloth is exquisite as are the details that make the figures of Athena!
The upper register of the ‘Drageoir’ is beautifully lined with a geometric fringe while the upper border shows a laurel garland along the edges.

The pedestal is square resting on four round pearls of silver and decorated with stylized palmettos.
The ‘Frétel’ (or finial) is quite rare because again we find one of Athena’s symbol a tiny Palm tree the palm fronds nicely etched.
The edges of the lid are decorated with a reed wreath bound with lines of pearls.
One of the most refined features of this piece is the fact that the lower part of the lid (the part that does not show when the lid is closed) is beautifully carved out in a geometric pattern, you will see this in picture number 6!

The bowl insert is white crystal with ‘facettes’, it is original, and in Perfect shape, no dents or marks.
The piece is just lovely!

What makes it even more special is the Hallmark…we are dealing here with a 2ieme Coq Hallmark meaning Paris /1809 – 1819. Knowing that Denis GARREAU registered his mark in 1817, this is one of his earliest ‘Piece De Forme’ as a Master Silversmith!
There are VERY few pieces left of his work during that time…all the more rare..
Another wonderful detail for the collectors: The piece is also marked with what is known as a ‘Head of Greek Women’ with the letter P on the left hand side…
This is a hallmark that was used by the Silversmith Corporation, during the Revolution, between 1793 and 1794, which would mean that Garreau may have taken for himself a piece that was an earlier work by his own Master Ambroise Mignerot which had already been active during those years…It will be visible in picture number 8 along with the Makers Mark.

The Hallmark is ‘2ieme Coq’ -1st title (950/1000) – 1809-1819 – Paris
The Makers Mark is that of Denis GARREAU. It shows a D and a G topped by a ‘Navette’ (or boat) with a dot (Grain de Réserve in French) underneath.
Garreau was the successor of Ambroise MIGNEROT and specialized in larger decorational pieces (called in French Pieces De Forme), particularly “Drageoir’s” and Oil and Vinegar Cruet stands. His mark was created in 1817. His offices were located at 62 Rue du Temple in what is today the Marais area of Paris.