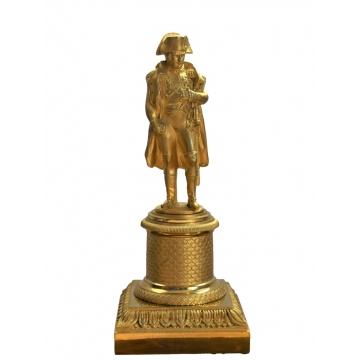 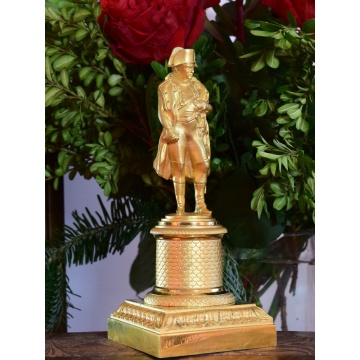 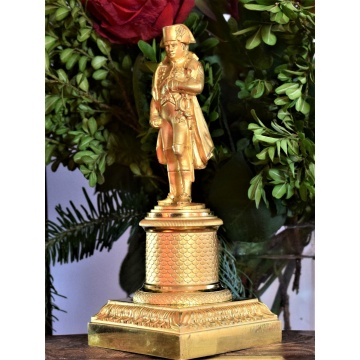 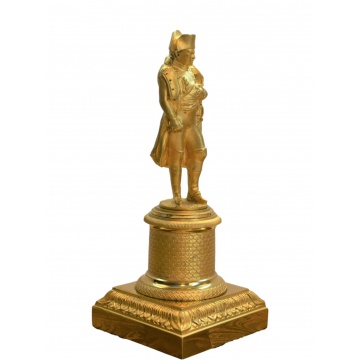 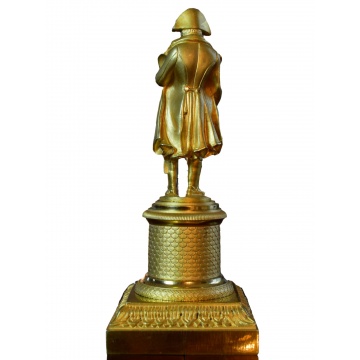 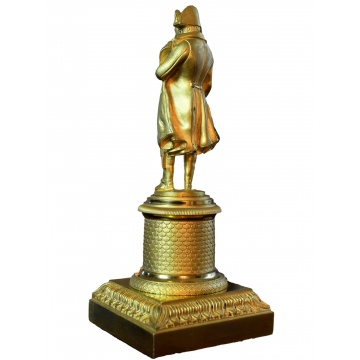 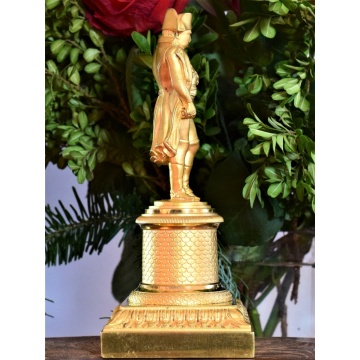 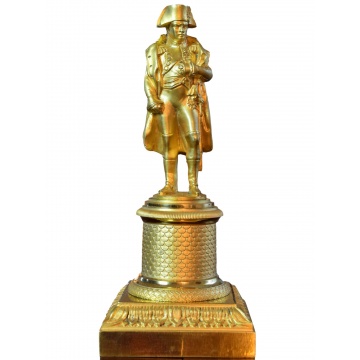 Exquisite Ormolu Statue Of Napoléon 1er after Seurre The Younger

The bronze statue of Napoléon 1er, executed by Charles Émile Seurre , was inaugurated on July 28, 1833 at the top of the Vendôme column.
It replaced the one by Chaudet, which had been removed at the fall of the Empire. Hidden and loathed under the Restoration, the effigy of the Emperor was officially restored by Louis-Philippe, anxious to spare the Bonapartists. The infatuation for Napoleon, already exalted by the Romantics, continued to grow.
The artists took over the character and the peddlers spread his image. Songs, engravings and statuettes spread to the countryside.
The Statue stood on top of the Vendôme Column which still sits Place de Vendôme, standing 44.3 meters high and about 3.60 meters in average diameter. It was inspired by the Trajan column located in the forum of Trajan in Rome, which is entirely made of marble.
The statue visible today dates from the Second Empire. It is due to the sculptor Auguste Dumont and represents Napoleon I, in Caesar imperator, draped in a short cloak and wearing as attributes of his glory, the sword, the winged victory and the imperial crown of laurels, it was created in 1863.

The Seurre Statue once removed to make way for the Auguste Dumont sculpture, was moved temporarily to the Rond Point de Courbevoie, however in 1870 during the French Prussian war the Statue was thrown into the Seine at the Pont de Neuilly. The Statue remained hidden underwater for 4 months before being fished out and finally, in 1911, brought to the Invalides, where Napoléon remains are entombed.

The Seurre statue of Napoléon 1er is nearly 4 meters high and was cast from the metal of 16 cannons taken from the Russian and Austrian armies during the 1805 campaign, kept in the Metz Arsenal.
On it Napoléon is represented not as a sovereign, but as a military chief, dressed as the colonel of the chasseurs à cheval of the Garde. This portrait therefore offers one of the most famous images of Napoléon 1er, the so-called “little corporal”, dressed in his coat, often called a frock coat, wearing the bicorne, with his hand hidden under his coat. On his chest is the Legion of Honor and the insignia of the Iron Crown, two distinctions that he himself created in 1802 and 1805. He holds a spyglass in his hand, an indispensable instrument of observation on the battlefield. On his left side hangs a sword, which could be the one he carried to Austerlitz in 1805. Finally, at his feet, bombs and cannonballs recall his initial training as a gunner.

Our lovely Gilt Bronze Statue is a perfect replica of the Seurre Statue to the exception of the cannonballs which are not represented.
Our lovely statue sits atop a beautifully ormolu column chiseled with scales with a laurel wreath wrapped around its base.
The square pedestal is chiseled with acanthus leaves.
The works is exquisite!
The ormolu is intact.