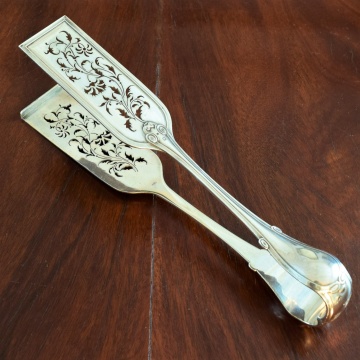 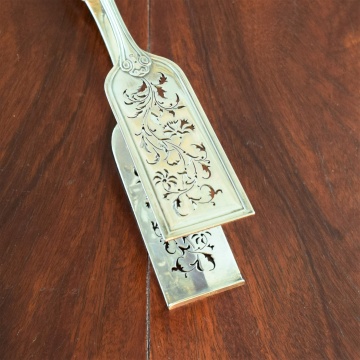 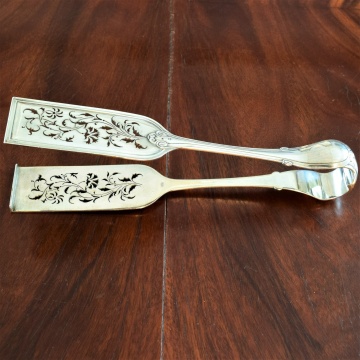 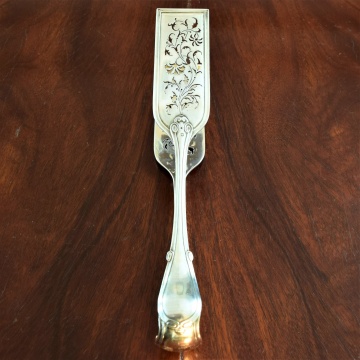 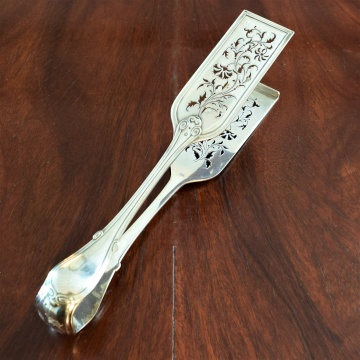 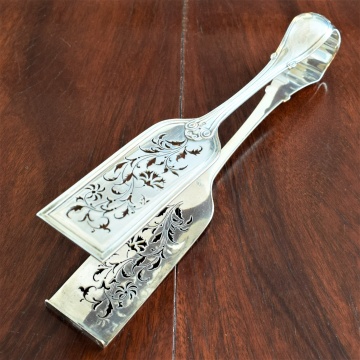 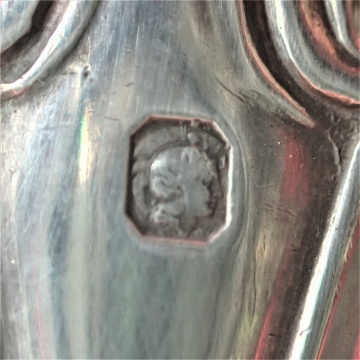 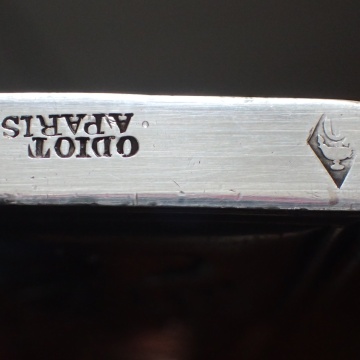 While we usually love to display the Main Pince or Asparagus tongs created in a quirkier shape by Alphonse Debain, we fell in love with the stylishness and the sheer beauty of this more regular Asparagus Tongs created by ODIOT.
The tongs shown here have a beautiful cut out décor on the tongs part, while the handle is decorated with a simple double line curling around.
The gorgeous cutaway work shows the wonderful craftmanship of the house of Odiot.
It fits wonderfully in the hand and is in exquisite condition, no losses or marks.
Though it is meant to serve Asparagus, it may also be used as a bread or pastry server!
The SD Monogram is topped by a Baron Crown.

The Makers Mark is for the House Of Odiot.
The House of Odiot is one of the most remarkable Dynasties of Silversmiths in France, starting with Jean Baptiste Gaspard Odiot, and more particularly under the wonderful talent of Jean Baptiste Claude Odiot.
Jean Baptiste Claude was received Master in Paris in 1785 and his mark was cancelled in 1809.
Jean Baptiste Gaspard ODIOT was the creator of the family business in 1650 and was a Silversmith to Louis XV.
After the father’s death in 1788 Jean Baptiste Claude ODIOT had to face the hardship of the revolution years, and was so much impacted by the revolution and the law banning exportation of silver items in 1792 that he had to join the army until 1801. He then re-ignited his career and went on to become Napoleon’s favorite Maître Orfevre (along with Biennais). He created the Coronation Sword and Scepter used by Napoleon. He was also the maker of the Silver and Gold service used by the Imperial Family and even created the Imperial Cradle for Napoleon’s son (the King of Rome), as well as Napoleon’s campaign dinner service.
As one of his first assignment he was mandated by Thomas Jefferson to create several pieces. He went on to acquire an amazing reputation and received special orders from all the European Courts as well as those of the Middle East and India. He was succeeded by his son, then his grandson with the final direct descendant Gustave ODIOT creating a joint company with 2 other ‘Maitres Orfèvres’ in 1906.
During all the successions, what made the ODIOT Name a household name was the amazing talent they possessed that enabled them to be precursors but also to follow and create the trends that would lead the market.
Today the House of ODIOT still stands at 7, Place de la Madeleine Paris, and their production remains exquisite!