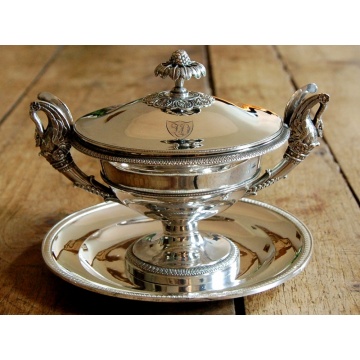 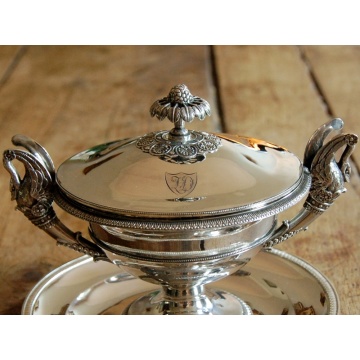 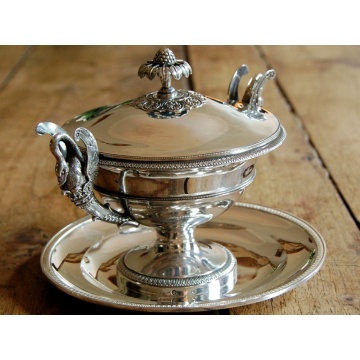 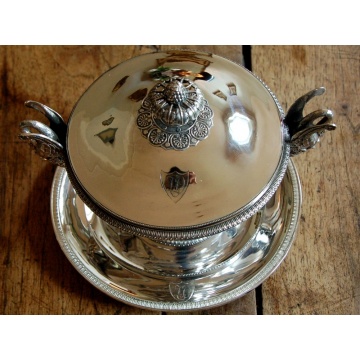 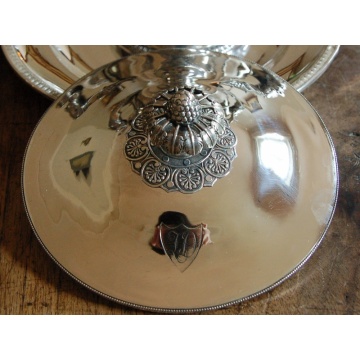 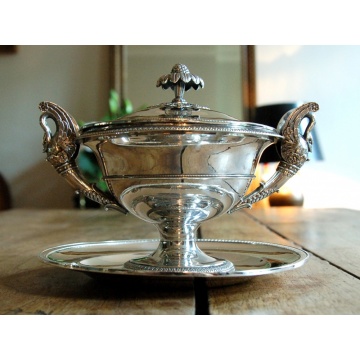 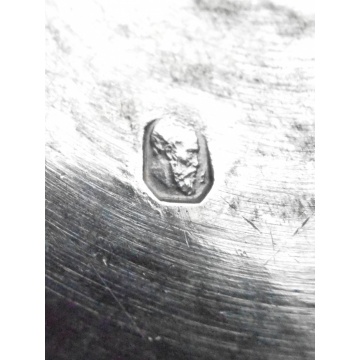 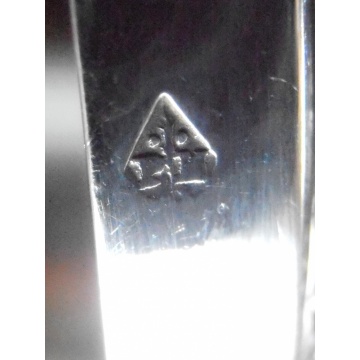 This Empire Style Antique French Silver Covered Cup, which is quite important, rests on a round ‘Piédouche’ or Pedestal with a laurel leaf design surrounding its edge. The lower part of the body of the ‘Bouillon’ is lined by a wreath of laurel leaves, while the rim has a beautiful palmetto motif which extends out beneath the lid when the cup is covered. On one side of the lid are engraved two initials: LD, which are found again on the presentation platter. The edges of the lid have a dainty pearl design.

The top of the lid (or Frétel or again Finial) is exquisite with an intricate flower with dainty leaves, resting on a crown of acanthus leaves.
The handles consist in two Majestic Swans with outstretched wings rising out of an acanthus cornucopia. Here again the details on the swans are staggeringly beautiful! The heads, eyes and beaks are just amazing!

This is an extremely refined piece which can be used in a variety of ways, originally used to hold a “Bouillon” or ‘consommé’ it can either be used to present condiments, orgravy, or fruits or as a sugar casket or to offer sweets at the end of a meal.
The width given above is taken at the handles.
The piece is in beautiful condition with only two tiny silver dents on the inner part of the lid, not visible unless you remove the lid and peer inside.

The Maker’s Mark is for Pierre Jacques MEURICE. The Mark show a P and an M on both sides of a spear of wheat, resting on top of a crescent.
Pierre Jacques MEURICE was received as Master in 1806 and established his shop 12 Cloitre Notre Dame, he then moved in 1811 to the Arcade St Jean very close to the Hotel De Ville de Paris, and finally stepped down in 1828.
If the name sounds familiar, it is because we have already spoken about him.
He is the Stepfather to Francois Desire FROMENT who he would take under his wing and eventually turns his workshop to in 1828. To honour his stepfather Francois Desire FROMENT would take up his name and became known as FROMENT MEURICE starting 1839 soon becoming the Master Silversmith to Napoleon the Third.