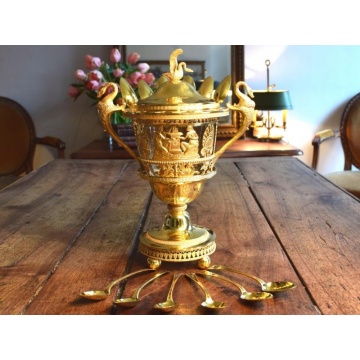 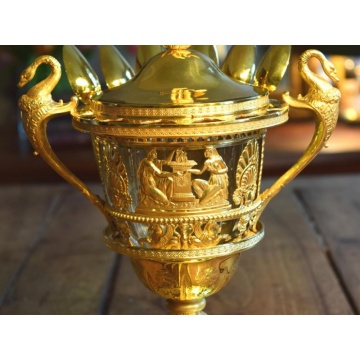 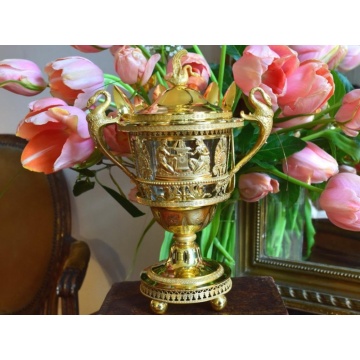 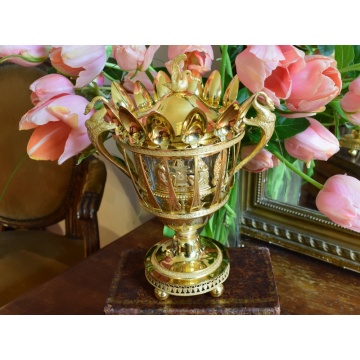 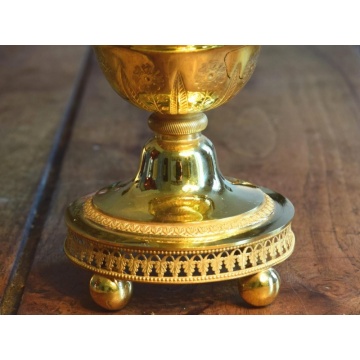 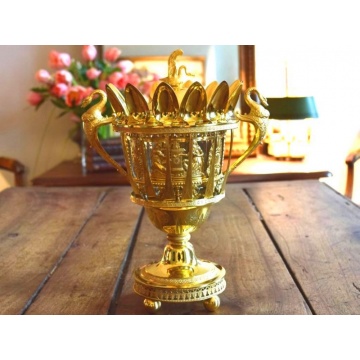 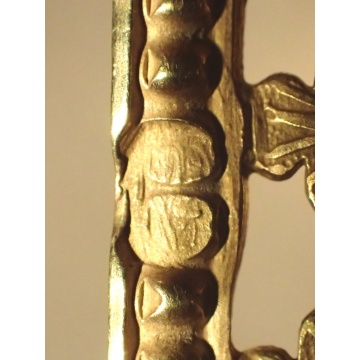 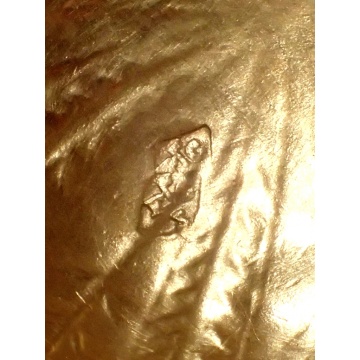 This Confiturier is entirely covered in 18 carat gold or ‘Vermeil’

The theme of this Confiturier is based on Marital Faith and Love.
The body is Baluster shaped (or Medicis Vase Shaped) with large Palm fronds decorating it on two sides, while the two main Figural ‘Tableaux’ represent a Couple draped in Antique clothing kneeling on each side of an altar.
Their right hands are joigned while the left hand (the hand of the heart) of the yound man is raised above the flame topping the Altar as if taking it as testimony of his eternal love as his promised wife holds hers over her heart.

The middle part of the main body is carved with a beautiful décor of Marine Mythological Horses inspired by those pulling Poseidon’s cart.

The detail on both registers is amazing! Delicate, precise, just amazing!
The lower part of the body is engraved with flowers and palm fronds while the pedestal, which rests on 4 gold coated silver pearls, is lined with the same acanthus leaf garland that graces the upper part of the ‘Confiturier’.

The handles consist in two Majestic Swans rising out of an acanthus cornucopia. Here again the details on the swans are staggeringly beautiful! The heads, eyes and beaks are just amazing!

The ‘Frétel’ (or finial) which is rather small shows another Swan stretching its wings.

The bowl’s insert is Wheel Cut heavy Crystal and original to the piece.
It has a micro chip at the bottom – not at all visible unless you really take it out and upend it.

The Spoons are decorated with the same flowers rising on the lower part of the Confiturier and are also 18 carat gold covered.

The ‘Confiturier’ comes in it original Box

The Makers Mark is that of François Cécil SOCCARD.
His mark shows his three initials with a flag flying above and two dots.
His mark was registered in 1813 and re gistered in 1816, he was replaced in 1821 by Jean Baptiste Soccard.
He held shop at 7 Place de L’Herberie in Lyon then at 2 Quai Villeroy.
He specialized in larger decorative pieces.