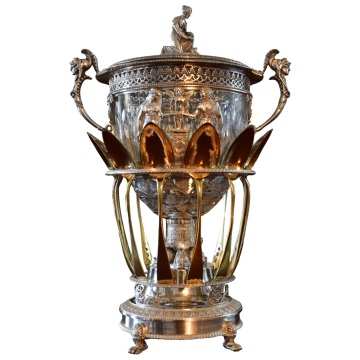 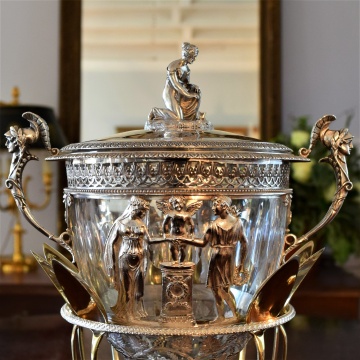 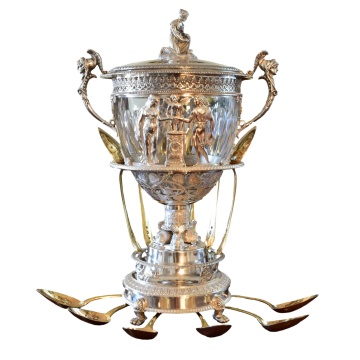 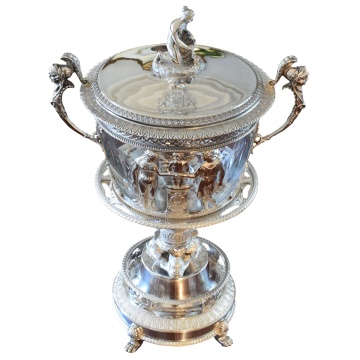 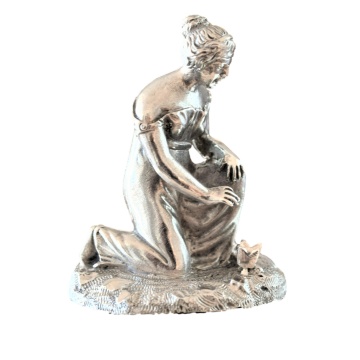 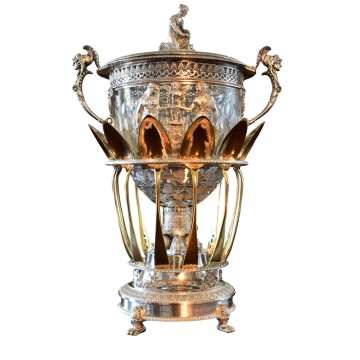 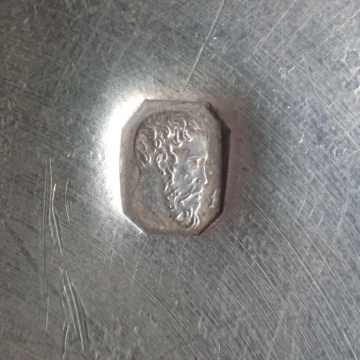 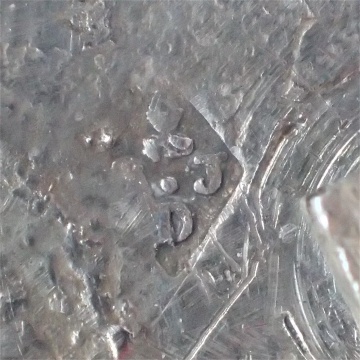 In France we call them ‘Drageoir’ or ‘Confiturier’, but the only official name is a ‘Confiturier’ (Hence a Jam container), and it is widely thought that, originally, they were only used as Ceremonial Sugar Bowls.
The Details on this piece are lovely!
The Scenes represented are taken from the Greek Mythology and symbolize marriage and love.
The upper register on the main body shows 4 designs – 2 of each kind on opposite sides.
The main one is a couple surrounding the Altar of love.
Cupid stands on the Altar and holds both their hands.
The draping of the cloth is just exquisite, as are the carvings of the faces which are extremely delicate.
The side register shows a floral design, while the handles are beautifully carved into the face of the God Hermes, the god’s messenger.
The very upper register is delicately carved with a geometrical lace wreath, while the lower part of the main bowl shows a lovely vine and grapes décor.

The first part of the pedestal is decorated with beautiful dolphins in ronde bosse, which symbolize the purity of sentiments.
The lower part of the pedestal shows four carvings that depict the goddess Diana on her chariot that is being led by two deer or does.
Diana in the Roman Mythology or Artemis in the Greek Mythology has a complex meaning….
She is the goddess of the wilderness, of hunting and childbirth. A composite divine figure, with origins that are at once Asian, Aegean and Nordic, she is sovereign of nature and mistress of all sources of life, as confirmed by her name on Mycenaean tablets.
She is therefore a complex goddess: protector of the animal world, but a leaping hunter, she kills animals but also watches over them; goddess of the fertility of the soil, in relation to the earth, water and vegetation, she is the divinity of birth, of growth but can also take on an infernal or lunar character; goddess of purity, of the life of the earth, of the earth, of the water and of the vegetation.
Goddess of purity, she protects chastity, is the guarantor of religious institutions but also accompanies women in the important stages of their lives, notably childbirth.
Her role in this décor would definitely be the protector of childbirth and women.

The square pedestal rests on four lion’s paws.
The lid is also quite unique featuring a toga draped woman gazing at a butterfly used as a finial!

The lid also shows a Crest and motto reading: Augere Et Vivere in latin. Topped by a count’s crown.
We were able to trace back the crest and motto to the Augier de Montgremier et de Chézoud family.
The Augier family originated in the village of Evaux in the Marche area of France and belong to a very old bourgeoisie lineage.
Jacques Augier was, under Louis XIV the Kings Counselor in Evaux.
Francois Augier, who passed away in 1799 was Camp Maréchal, his descendant were known as the Augier de Montgremier.
This beautiful Confiturier was purchased by the Family between 1819 and 1822.
A beautiful find and a wonderful provenance.
The Confiturier comes with 12 Gilt Silver Spoon by Master Spoon Maker Charles Joachim Benjamen Dallemagne, who registered his mark in 1786, then again after the French Revolution in 1801 and who cancelled his Mark in 1820.

The Makers Mark is for SJ DUPEZARD and shows an SJD.
Dupezard registered his mark in 1809 and cancelled it in 1822.
He held shop in Paris, first 37 rue de la Bucherie, then 5 rue de la Vieille Draperie and finally 4 rue du Mouton.