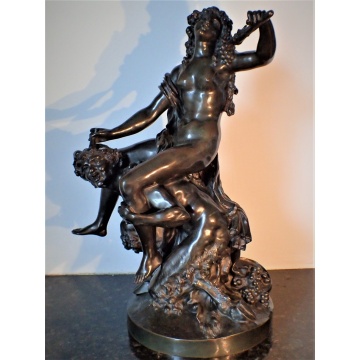 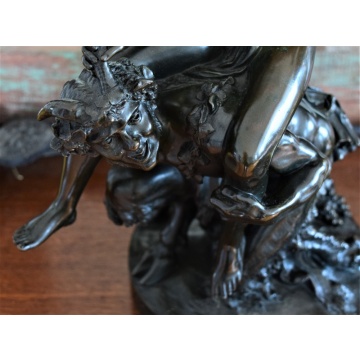 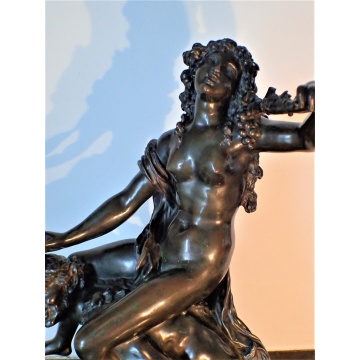 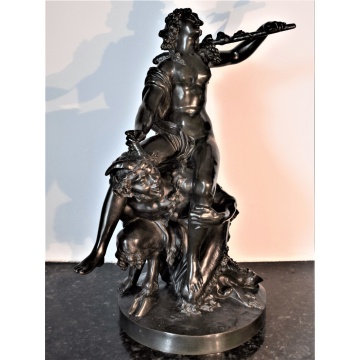 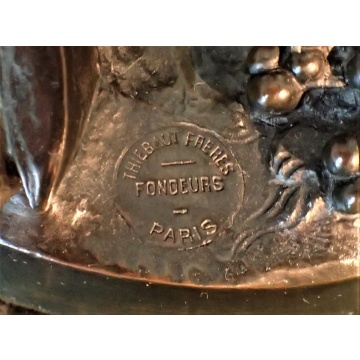 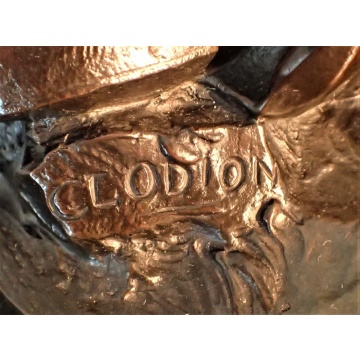 Gorgeous Bronze Statue Of A Nymph And Satyr By Clodion~Sold~

Gorgeous Bronze Statue of a Nymph and Satyr by Clodion.

The Terra Cotta original is actually held at the Museum of the Legion of Honor in San Francisco.

Claude Michel or Clodion, deserves a little more background.
He was born in Nancy on Dec. 20, 1738, into a family of sculptors. He studied with his uncle, Lambert Sigisbert Adam, a prominent sculptor whose work was significant in transforming the vigorous and dynamic baroque style into the more delicate rococo. Clodion also worked with the famous rococo sculptor Jean Baptiste Pigalle. In 1759 the Royal Academy awarded Clodion the Grand Prize for Sculpture, and he was in Rome between 1762 and 1771. During the 1770s he completed two important commissions for the Cathedral of Rouen: the marble St. Cecilia and the bronze Crucified Christ.
In 1773 he became a member of the academy. He created his most important works during the 1770s and 1780s.

Clodion, whose career spanned the last decades of the Ancien Régime through the French Revolution and Napoleon’s reign, embraced his era’s taste for antiquity.
He possessed great technical virtuosity and executed many types of sculpture in a variety of media.

Clodion is most noted for small, intimate terra-cotta sculptures or statuettes of nymphs, fauns, satyrs, and bacchantes, mythological creatures symbolic of erotic pleasure.
Such works as the Intoxication of Wine (Nymph and Satyr) and Seated Bacchante Playing with a Child are typical examples and are wholly within the decorative rococo traditions of 18th-century art. These graceful productions convey a mood of exuberant gaiety and depend for their effect upon a delicate play of highly refined textures; the soft medium of terra-cotta allowed Clodion to exploit fully and sensually the contrasting textural values of flesh, hair, fabric, fur, and foliage.
As early as the 1760s, the rococo style was under attack as frivolous and trivial, and during the last half of the century it was gradually replaced by a return to the relative severity of the art of antiquity. Clodion, however, was unaffected by the encroaching neoclassicism, and his statuettes remained popular until the French Revolution. During the Revolutionary and Napoleonic periods neoclassicism triumphed in the arts, and in his later works, such as the reliefs (1806) for the Arc du Carrousel in Paris, Clodion finally accepted the new style. He died in Paris on March 28, 1814.

Our Statue bears Clodion’s signature but also the stamp of ‘Thiébaut Frères Fondeurs Paris,” a major sculpture foundry active in Paris during the nineteenth and early twentieth centuries.

First located on rue Faubourg-Saint-Denis, this family firm was originally producing copper cylinders that were used for printing on fabrics. They started to work as founders from 1851, under Victor Thiébaut’s supervision.
He established a foundry devoted to works of art. At the beginning, they cast raw bronzes that they gave to Barbedienne or other founders to finish. Then Victor Thiébaut went into patrnership with various famous sculptors: David d’Angers, Carpeaux, Falguière, Carrier-Belleuse, Paul Dubois or Pradier. The factory also made vases, cups and fireside accessories.The firm cast monumental pieces too, such as Saint Michel striking down the dragon designed by Duret for the Saint-Michel’s fountain in Paris, and Napoleon I designed by Dumont for the Vendôme column. Victor Thiébaut gradually became blind. In 1870, his three sons, Victor (1849-1908), Jules (1854-1898) and Henri who was also sculptor (1855-1899) became the head of the firm. In 1877, it moved to 32 Villiers’ Street.

In 1884, the firm established a new shop on 32, Avenue de l’Opera. At that period the company took part in many exhibitions and made a lot of outstanding monumental works: Gloria Victis by Mercié, monument devoted to Paris’ Defence made by Barrias, statue of Alexandre Dumas Père and the vase called Le Poème de la Vigne (San Francisco Museum), both made by Gustave Doré, statue of Etienne Marcel made by Idrac for the Paris’ City Hall, statue depicting the Republic by Morice, statue depicting Charlemagne by Marquet brothers, and a reduction of the Statue of Liberty made by Bartholdi which is now on Grenelle’s bridge in Paris.

During the 1889 Paris Universal Exhibition where he exposed with his brother, the Maison Thiébaut Frères (Thiébaut Brothers) of world renown was in poll position. One can read in the catalogue of the Universal Exhibition : “the most difficult and ambitious works of art do not frighten them”, later in 1893 during the Chicago Universal Exhibition, their bronzes were described as “wonders of casting, chiselling and patina”.

In 1898, Rodin signed a contract with this company regarding the casting of two of his works in different sizes: Saint John the Baptist and Triumphant youth. In 1901, Victor Thiébaut sold the firm to Gasne and retired.

This gorgeous statue is a perfect example of the collaboration between an incredible sculptor and a wonderful caster! A true masterpiece.