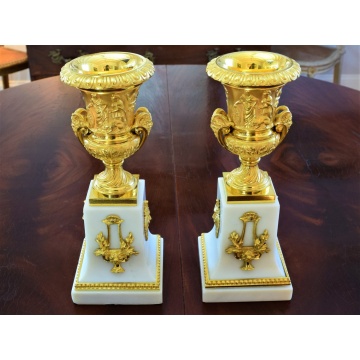 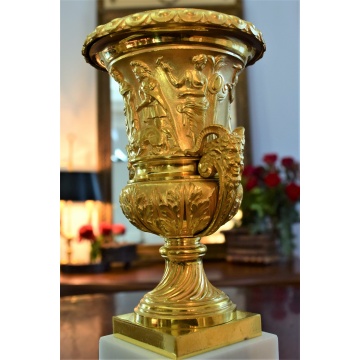 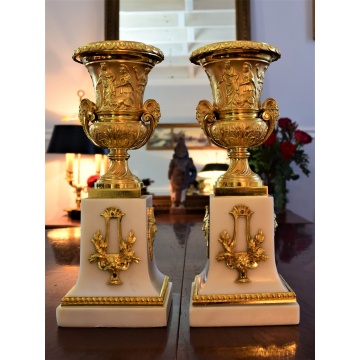 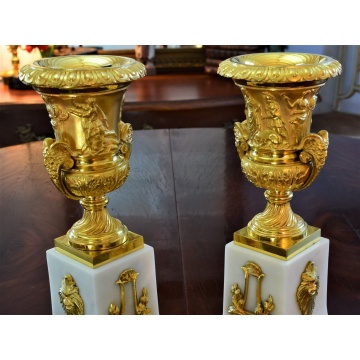 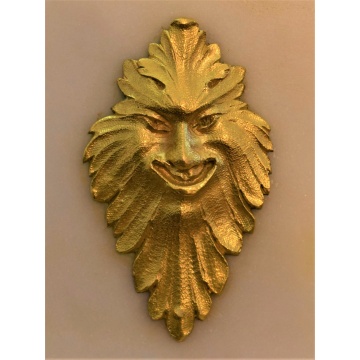 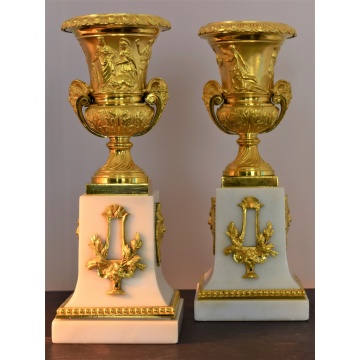 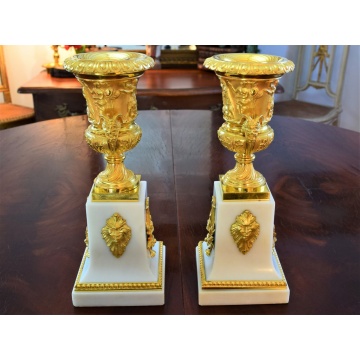 Gorgeous Pair of Crater-shaped vases in chalice form, in chased and gilded bronze after the shape of the so-called Borghese and Medici vases, dating to circa 1810.

The body is decorated on an Amati background with a relief frieze representing scenes from the Antiquity.
The rims are adorned with and egg and dart motif, while the lower part of the vases are chiseled with acanthus leaves, and stand on a spreading fluted stem, itself decorated with twisting gadroons.
The handles, of remarkable delicacy, are shaped after the head of Satyr or Pan’s head, whose details are superb.
The quadrangular white marble bases are highlighted with a bronze beaded frieze and decorated on two sides with grotesques and floral vases in opposition.
The quality of the Ormolu is superb!

We know several variations of this model of Medici vases on quadrangular base, testimony of the taste for the ancient Empire period and honored by Pierre Philippe Thomire, one of the most famous foundry chiseler of the late eighteenth century, early nineteenth in France.
Thomire took his inspiration from the so-called Borghese vase visible today at the Louvre, which dates approximately to the years 30-40 BC and was discovered in the gardens of Salluste in Rome, and was brought to Paris in 1808.
The Borghese Vase has often been compared to the Medici Vase from the same period,1st century BC. It appeared in 1598 in the inventory of the Villa Medici in Rome, and is now kept in the Uffizi Museum in Florence.
They differ only by the iconographic theme of the frieze.
These craters are called “neo-attics” because they combine characters from models in vogue in the 150s -130 BC. These in turn are inspired by motifs older by nearly two centuries: the bronze crater found in Dervéni, Macedonia, a masterpiece executed around 320 BC, gives an idea of these origins.
From studying several vases found in shipwrecks archeologist deduced that these vases were produced in Athens, and were shipped to decorate gardens of wealthy Roman customers, lovers of Greek art.
Since the middle of the 17th century, the Borghese Vase has been one of the most admired ancient marble vases, considered a symbol of great taste.
Thus it found its way into numerous Artist’s paintings and decors, as is the case with Hubert Robert, and Giovanni Paolo Panini.

In the case of our beautiful Pair of Medici Vases two details differ from the Borghese and Medici vases, the handles with the Satyre’s head and iconographic the theme of the relief.
This gorgeous Pari of Medici Vases are Early 19th Century Circa 1810/1820
The Ormolu quality is lovely. The marble base shows two little losses.