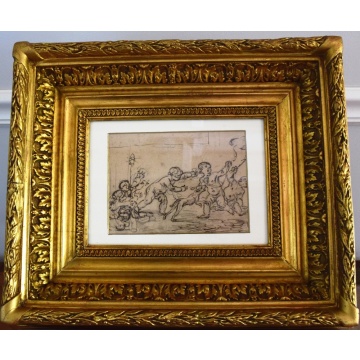 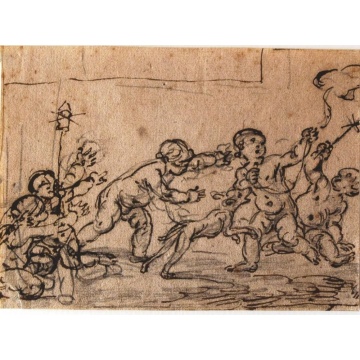 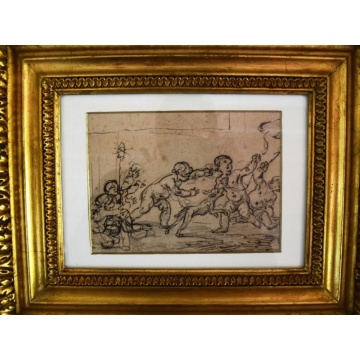 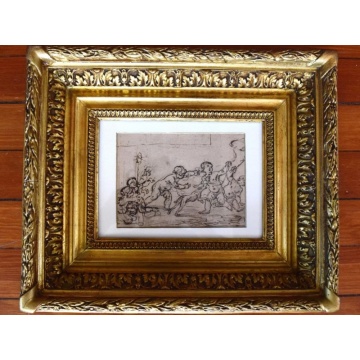 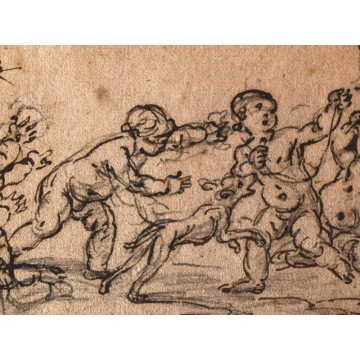 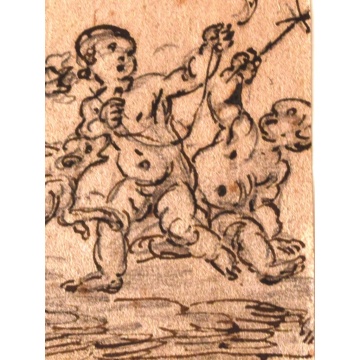 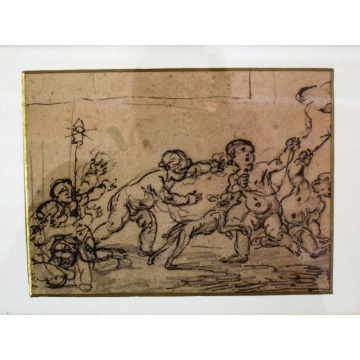 Featuring one of the painter’s favourite subjects, Putti, the drawing shows five Cherubs playing with a kite and, what seems to be, a firecracker. The ‘Putti’ are eagerly followed by a barking dog.
The drawing is full of life and mirth!
You can practically hear the laughter of the children and the barking of the excited pooch, the lively rendering typical of the works of Joseph Ignace François Parrocel.

Joseph Ignace François Parrocel was born into an Artistic family that spanned 6 generations.
The Parrocel dynasty produced no less then 14 painters.
Originating from the South of France the founder of the ligneage was Georges Parrocel who was born in Brignoles in 1540 and passed away in 1614.
Joseph Ignace François was the last generation, born in Avignon in 1704 to the painter Pierre Parrocel and his wife Anne.
As per the family tradition he apprenticed under his father and like his great grand father specialized in religious themes as well as strangely enough battle scenes cultivating simultaneously the two genres.

Joseph Ignace François Parrocel particularly excelled and loved drawing cherubs or infants, as is apparent by his drawings legacy in the different museums and private collections.

By 1717 he had gone to Italy to continue learning his craft and came back heavily influenced by the Master of the 16th century.
By 1730 he married and settled in Paris. Considered at this time as only ‘The son of’ instead of a full fledged artist he was commissioned at first to decorate minor churches as well as an opera house.
In 1735 he would leave for the second time for Italy, becoming fascinated by the works of Bernini who inspired a lot of his work.
By 1740 he returned to France and settled for a few years in Strasbourg following the Cardinal De Rohan, whose mansion he would proceed to decorate.
From there, in1744 we can trace him in Lyon before his permanent return to Paris in 1749. There he would finally acquire the status of History Painter for the royal Academy garnering the commissions of several major works and finally receiving the recognition of his peers.

He would pass away in 1781 in Paris.
Over his career he professed his love of the Seicento masters often using the same techniques.
As a drawer Parrocel used two distinct methods:
-Pencil: with black pencil or Sanguine and white cray highlights
-Ink and brown wash, with grey or brown highlights.

His drawings always portray a great freedom of movement: and it is amazing to him playing with the different wet ink mediums adding or removing washes to create depth and movement.
Ink is usually used to put down the first draft, then the washes come to define and highlight.
His total body of works can be divided into two periods; the heavier inks were usually done before or during his stay in Italy, while the lighter washes and white cray usage became more common after his return to Paris.

His work was often criticized by Diderot due to the free spirit and lack of retouching his drawing exhibited, but it is exactly those two parameters that draw us today to this wonderful artist!!

The drawing is set in a gorgeous early 19th century gilt wood frame, decorated with laurel and acanthus leaves.

This charming French XVIII School Antique Drawing was acquired at the Crait & Muller in Paris in 2017 under # 76.