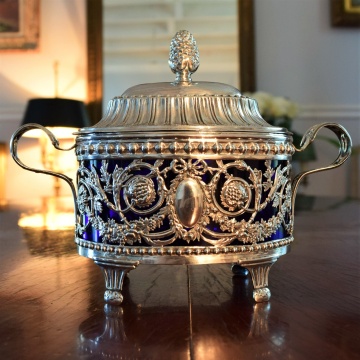 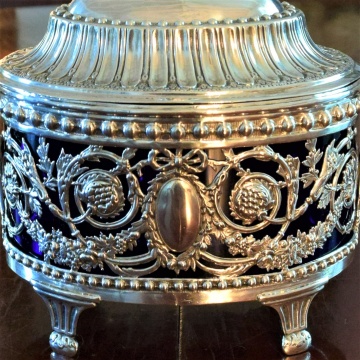 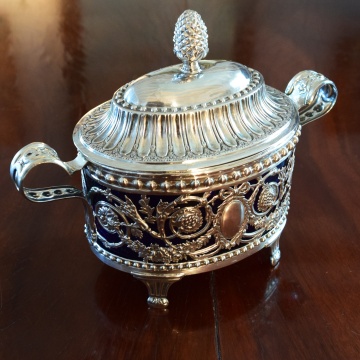 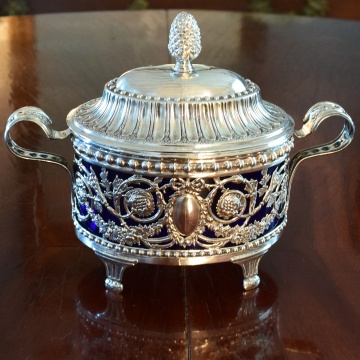 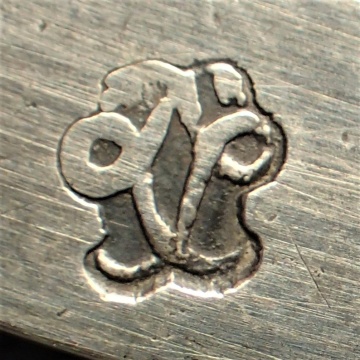 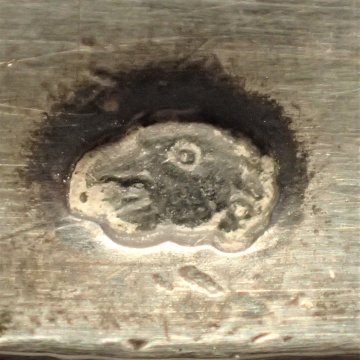 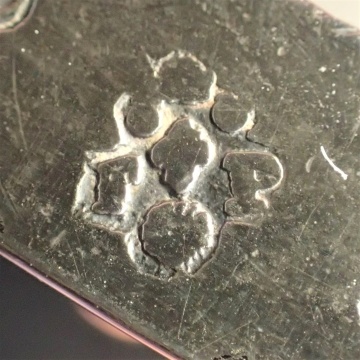 18th Century Silver pieces are always a treat…This beautiful piece was created during the Louis XVI era, 5 years before the death of the King and survived both the Reign of Louis XVI and the French Revolution….It is quite incredible.
The silver framework, which holds the cobalt blue crystal, is cut away to reveal the darker color of the crystal, enhancing the whole effect and outlining the beautiful carvings.
On each side of the bowl beautiful floral and fruits garlands intertwine surrounding a medallion topped by a ribbon.
The vessel rests on 4 feet carved in the shape of pillars.
The lid is decorated is slightly curved and decorated with a gadroon and pearl design and is topped by a Raspberry which forms what we call the ‘Frétel’ (or Finial).
The size of the bowl makes it ideal to either be used as a sugar bowl or serve as a condiment bowl, or even to showcase flowers.
The cobalt crystal interior is original to the piece and is in superb condition. No chips or dents.

The Fermiers Généraux Marks are strikingly crisp and beautiful on it:
Photo # 5:
The Year Hallmark or Poinçon de Jurande is a Crowned P used by Fermier General (Tax collector in essence) Henri Clavel in Paris starting July 11th 1787 (Notice the tiny 87 right below the crown…)and ending on November 11th 1788.
Photo # 5: We have the Charge Mark (start of the work) with the intertwined L’s starting August 31st 1782 and ending in January 1789.
Photo # 6: We have the Discharge Mark (in essence taxes were paid and object was finished and ready to be sold) featuring an eagle’s head which was used starting March 7th 1786 until January 1789.
Hence we can pinpoint the creation of the lovely ensemble to 1787.
Photo # 8:
We have the FP Mark framing a fleur de Lys, registered by François Picard in 1784 in Paris and used until the last months of 1789, before the Old Regime collapsed.