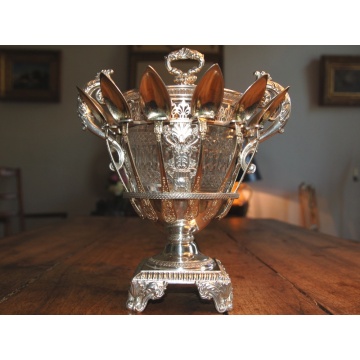 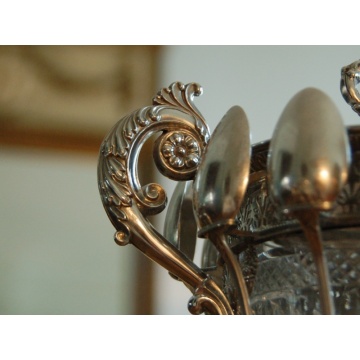 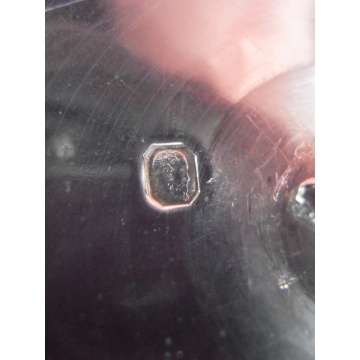 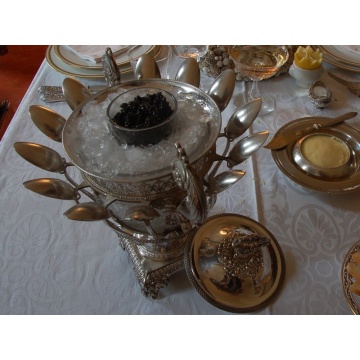 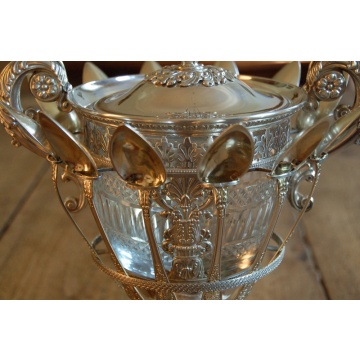 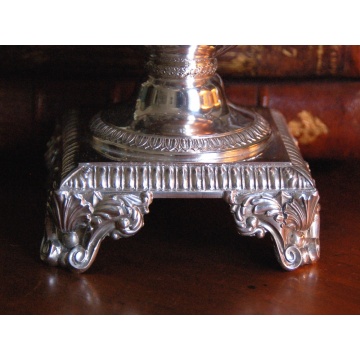 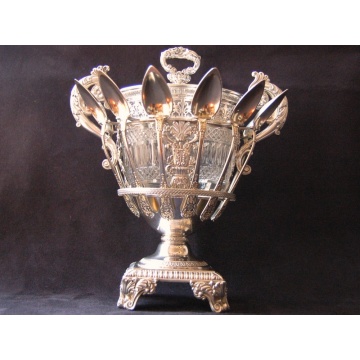 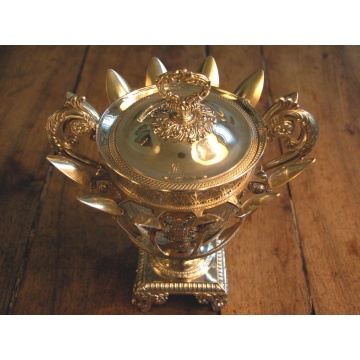 Also called a ‘Drageoir’ the only official name is a ‘Confiturier’ (Hence a Jam Vase). As already noted in other descriptions it appears however that, originally, these pieces were mostly used a ceremonial sugar bowls.
It is nowadays extremely rare to find “Confiturier’s” still showcasing the spoon holders, hence the importance of this piece!
The work is absolutely gorgeous, with several tiers of silver decorations. The main body has 4 main figural ‘Tableaux’ showing lovely wild leaves and palms as well as two Cornucopias or “Horn of Plenty” or “Cornes d’abondance” In French. They symbolized wealth and abundance as well as nourishment. The upper register is lined with a lovely wreath of palms.

Between both registers we have a silver band with oval openings which is actually a spoon holder.
The Handles of the “Confiturier” are decorated with palms as well as rosettes, their base sprouting from other cornucopias.
The ‘Frétel’ (or Finial) features entwined palms and seashell forms and rests on a crown of  exquisitely rendered acanthus leaves, while the edge of the lid shows a gorgeous and delicate wreath of entwined laurel leves which is again found on the Silver circle that helps lock the spoons into place in the lower part of the bowl. The bottom of the ‘Piédouche’ (or pedestal) has palm frond designs as well as seashells.

The bowl insert is white crystal with ‘facettes’, it is original and in impeccable state. The piece itself is absolutely beautiful!

The Particularity of these pieces, is that the Maitre Orfevre who did the main object, did not create the spoons…The spoons were always ordered from a Maitre Orfevre who specialized in them.
In our case the Spoons are by Maitre Orfevre ‘Cuilleriste’ (spoon maker) Charles Salomon Mahler. They show lovely floral scrolls, feathers  and rosettes to match the main design, but also typical of the Confiturier the spoons, are only decorated on one side.

The Confiturier itself without the spoons weighs 20.40 oz
The spoons weigh 8.40 oz. The width given above is taken at the handles.

Jean Nicolas BOULANGER’s Makers Mark shows a JNB topped by a ‘pestle’ .He was received Master, and his mark was created in 1797.
He ended his career in 1819, hence the piece on offer, which shows the ‘Vieillard’ Hallmark, must have been created during his last year. His offices were located 9 Cour Neuf du Palais in Paris.
Charles Salomon MAHLER Makers Mark was registered in 1816, His mark shows a C and his last name. His shops were located at 21 Rue Du Harlay in Paris