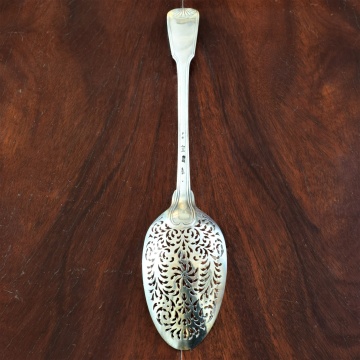 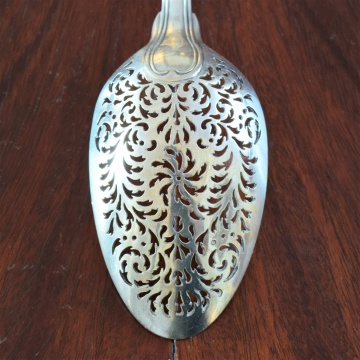 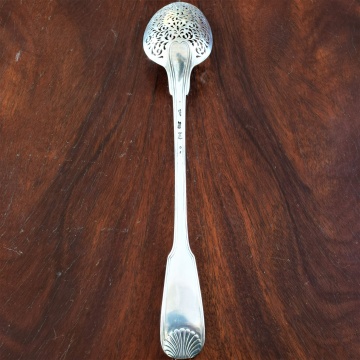 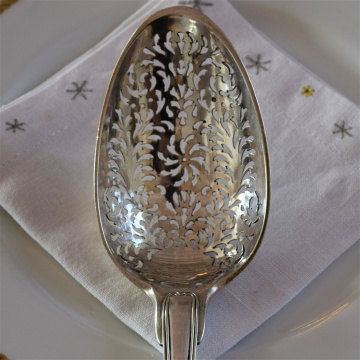 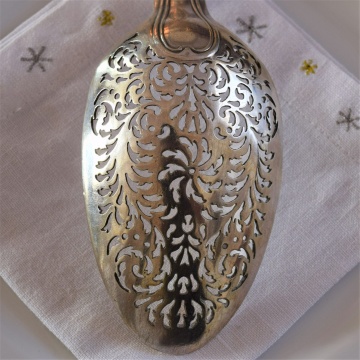 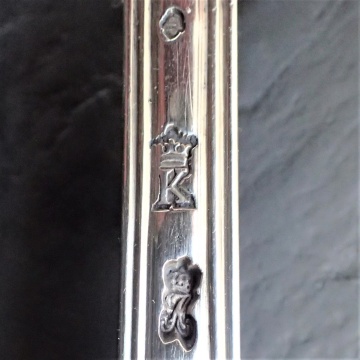 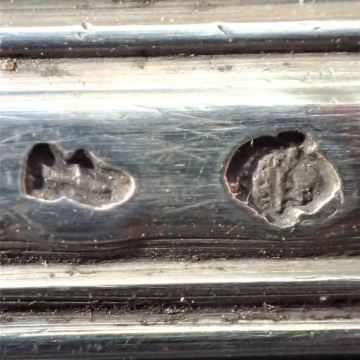 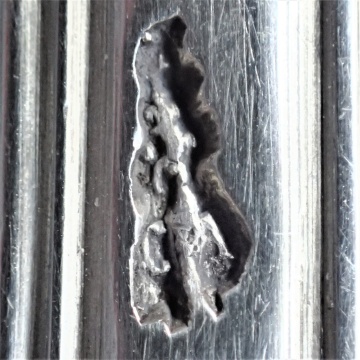 The bowl of the spoon is worked in a beautiful ‘repercé’ motif showing a central motif of an openwork of a rose window surounded by swirling scrolls of tulip motifs.
The handle is worked in a double ‘Filet’ or double thin line design, which surrounds the whole piece, and ends with a beautiful Seashell design on both sides.

The work is extremely refined and the piece is in beautiful condition.
The Olive Spoon was very much appreciated in the South of France for obvious reasons and became a gift of choice.
It also indicated wealth as olives were a delicacy and rather expensive if bought to be eaten whole. Hence owning an Olive spoon showed one’s status…
Contrary to the smaller olive spoons later on sold as part of service sets, these were done to stand out alone and hence were quite long and heavy as indicated above.
The width given above is that of widest part of the spoon itself.

We are here dealing with Poinçons Aux Fermiers Généraux – Or Old Regime Marks pre dating the French Revolution:
Starting with photo number 6: we have the Poinçon de la Marque for Paris: a Crowned A that was used from October 1st 1768 under Fermier General Julien Alaterre, until November 17th 1774 under Fermiers Généraux (Tax collector if you will) Jean Baptiste Fouache and Dominique Compant.
Photo 6: you will also see a Crowned K for the Poinçon de Jurande, used from July 16th 1773 to July 15th 1774.

Photo Number 7: shows is the ‘tête de soldat’ or head of a helmeted soldier, discharge used for small silver objects between October 1st 1768, until November 17th 1774.
The Second symbol is that of a Shoe that was used as a Charge Mark in Amiens under the Titre de Paris for the years 1768 to 1774.

Hence this gorgeous spoon would have been done between 1768 and 1774.

The Makers Mark, shown photo number 8 is for Paris Spoon Maker, Maitre Orfèvre Claude Auguste Aubry.
Claude Auguste Aubry registered his mark (CA with a star in the middle (though described as a star the center motif does is actually a Crozier), topped by a Fleur de Lys and a Royal crown) on September 19th 1758.
Claude Auguste AUBRY apprenticed first with Jacques Duguay then with Simon Gallien before registering his own Mark. He stopped working in 1792.
One of his Sugar Sifter Spoons can be found at the Metropolitan Museum Of New York.
Our Spoon-maker is talked about in Bilgi KENDER’s and François Baudequin’s wonderful book ‘Les Cuillers à Sucre dans l’Orfèvrerie Française du XVIIIième. Page 148.