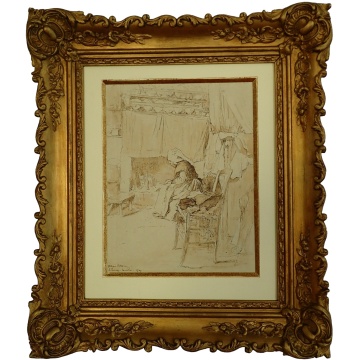 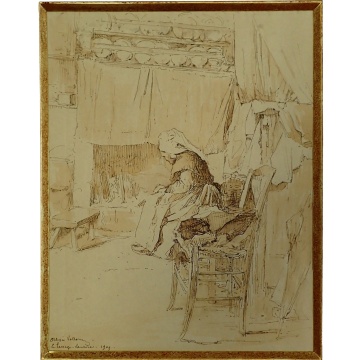 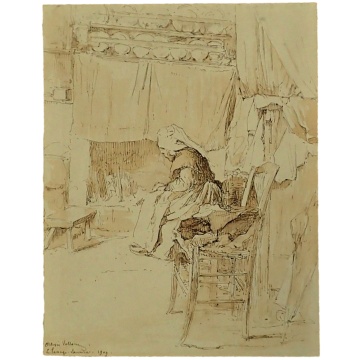 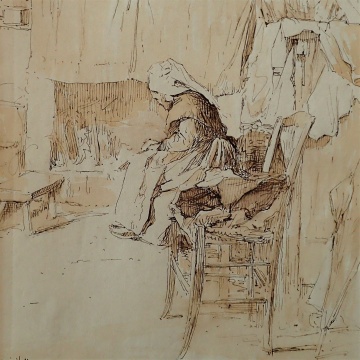 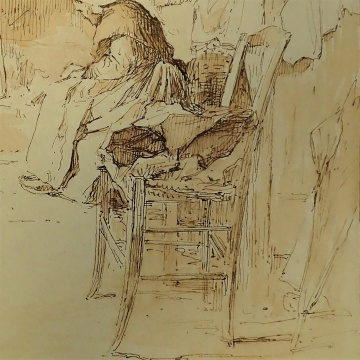 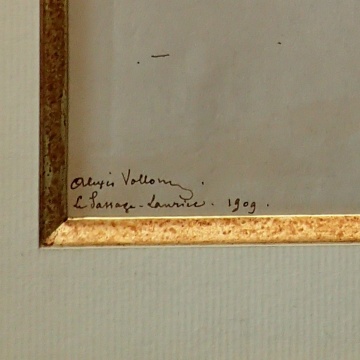 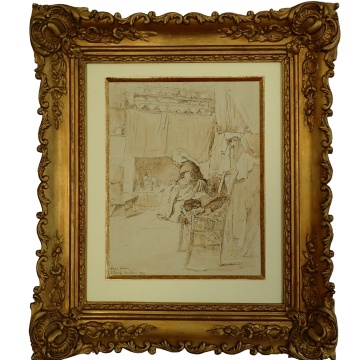 In Front of the Fireplace in Passage Lanriec by Alexis Vollon

A beautifully executed Ink on paper drawing of an old woman in front of her fireplace in Passage Lanriec in Brittany.

This lovely work is a preparatory drawing for a painting done later, where he kept the same fireplace but in a slightly different position.
It is signed by Alexis Vollon and dated 1909, as well as annotated ‘Le Passage Lanriec’.

It represents an older woman in front of her fireplace in her one room house, sawing, while on her right can be seen her bed and directly above the mantlepiece are displayed her collection of plates.
Depicting a scene in Passage Lanriec close to Concorneau, this drawing is beautifully done in black and brown ink with ink wash, depicting the simplicity of life in Brittany in the early 1900s.
The territory of the former commune of Lanriec corresponds to the part of the current commune of Concarneau located on the left bank of the ria du Moros.
Lanriec was traditionally a rural village whereas the large hamlet of Passage (also called Passage-Lanriec), facing the walled city of Concarneau, was a place of sailors and cannery workers.
The name of this hamlet, “Le Passage”, came from the existence for centuries (attested since at least 1720) of a ferry allowing to cross the Moros estuary at this place.

Born in 1865, Alexis Vollon studied painting under his father Antoine Vollon.
Influenced by the Impressionists, Vollon knew how to transcribe the atmosphere of the scenes he depicted. As well as his landscapes, his portraits and genre scenes testify to his indisputable talent.
During his career, he tackled the most diverse genres, scenes from the Italian Comedy, portraits, landscapes and seascapes.
Alexis Vollon devoted an important part of his talent to portraiture, and was a master of pastel drawing, a pleasant genre to which he gave a very personal touch.
Every year, from 1880 to 1901, a painting representing the seashore at Mers-les-Bains or the port of Le Tréport appeared in the Salon des Artistes Français. It was in 1884, at the Galerie des Artistes Modernes, in Paris, rue de la Paix, n° 5, that Alexis Vollon’s first painting exhibition took place.
The following year he made his debut at the Salon des Artistes Français, obtained an honorable mention for his debut, and became a member in 1891. He would go on to obtain the silver medal at the Universal Exhibition in 1900.
A permanent member of the Cercle de l’Union Artistique, in Paris, he exhibited paintings there from 1897 to 1923.
From 1901, he exhibited at the Cercle Artistique et Littéraire, in Paris, a meeting place for artists and art lovers that was created in 1880. This Salon, very frequented, was divided into 2 groups: Painters and Sculptors on the one hand, and watercolorists, pastellists and engravers, on the other hand.