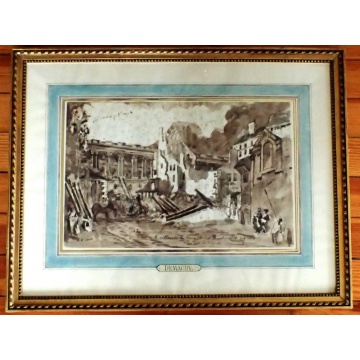 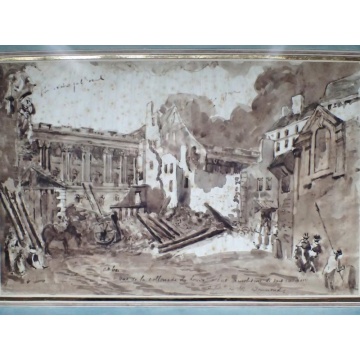 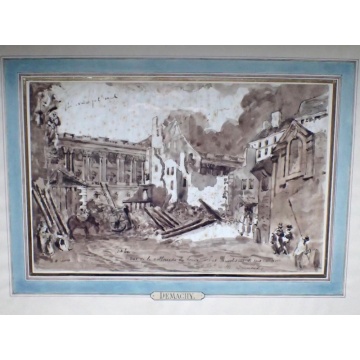 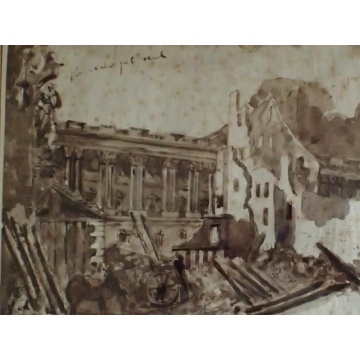 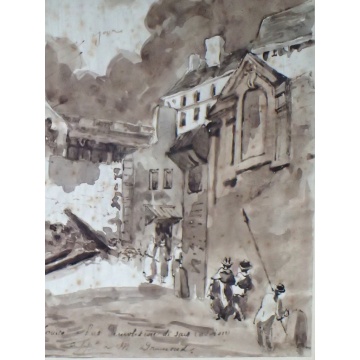 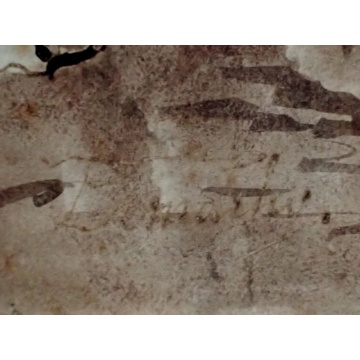 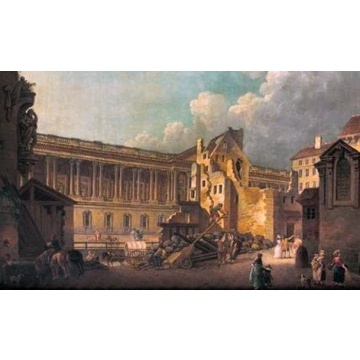 Ink Drawing Of The Louvre Colonnade Clearing By Demachy~Sold~

Ink Drawing Of the Louvre Colonnade Clearing By Pierre Antoine DEMACHY.
This work can be considered as a preparatory sketch for an Oil Paiting that was part of the David Weill Collection and was sold to a private collector in 1971.
Another version is also present at the Musée Carnavalet.

Pierre Antoine DEMACHY was born in September of 1723 and died in September of 1807 in Paris.
Born to a carpenter, yet exhibiting clear artistic skills he was soon studying under the helm of Giovanni Niccolo Servandoni, considered to be the most talented scenographer in France, though of Italian origin.
By 1755 he was certified as a ‘Painter of Architecture’ by the Académie Royale de Peinture et de Sculpture.
He specialized in painting ruins, trompe l’oeil, architectural decorations and imaginative scenes of Paris.
In 1757 he held his first exhibit at the Salon and continued to display his work there until 1802. By 1758 he was teaching at the Académie.
In 1764 his ‘trompe l’oeil’ painting at the Church of Sainte Genevieve, now the Pantheon, earned him the title of the Decorator of Sets for the Menus Plaisirs Theatre of the King.
He then earned a commission for several paintings by Catherine The Great of Russia

In 1777 he replaced Amand as a teacher at the Palais du Louvre and his classes became wildly popular due to their romantic representation of Paris. By 1784 Demachy had taken residence at the Louvre on the First floor.
He was then appointed as Professor of Perspective in 1785 and kept that position until his death.
Amazingly he weathered the Revolution!
He was even appointed in 1793 as Deputy to the Commune Générale des Arts which replaced the Acamédie. It was then that he dutifully painted a work called: ‘Burning of Feudal Titles and the Attributes Of Tiranny’.

Demachy was more then anything else an incredible Witness to the changes and evolution of Paris in the 1700, which he documented with gusto, from demolitions to constructions to repossessions….

Our Ink and Brown Wash drawing is very probably a sketch for the two oil paintings he presented at the Salon in 1765 under the following title:
‘Livret du Salon de 1765 – Numéro 86- Par M de Machy, Académicien, Deux tableaux sous le même numéro, représentant le Colonnade du Louvre’
The Ink drawing is signed on the left hand lower side, and is annotated with several colour and precisions by the artist.
It shows the Louvre Colonnade in the background, with buildings around it being demolished to give a better view and and a better perspective.
Photo number 7 in our display will show the Oil painting from Demachy of the same subject.
The drawing does show some age marks.