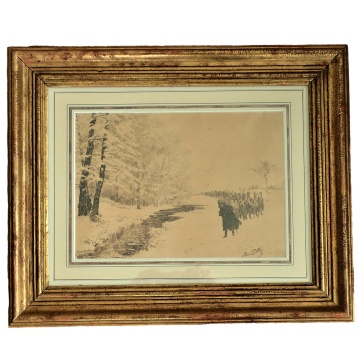 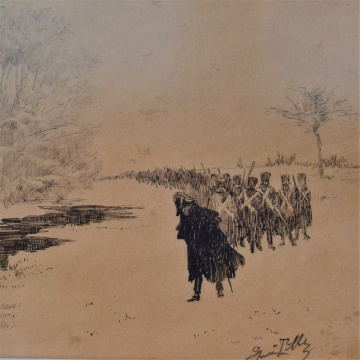 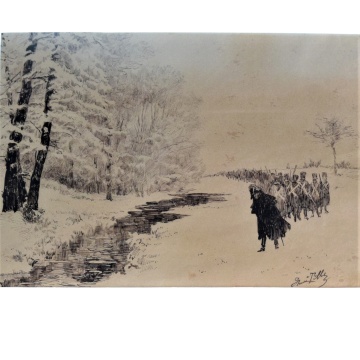 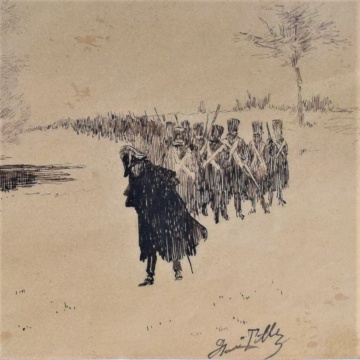 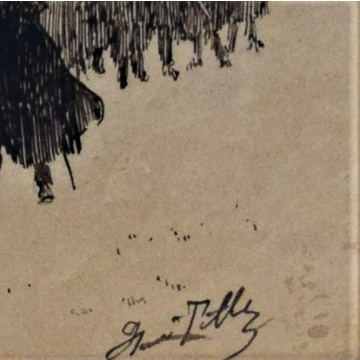 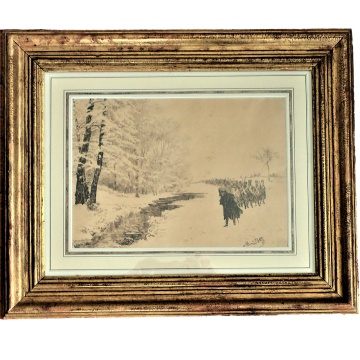 A Beautiful Ink Drawing of the Retreat from Russia Of Napoleon’s Army by Charles Henri Pille.

The Retreat from Russia refers to the retreat of Napoleon’s army to the territories of the French Empire in 1812 after the occupation of Moscow, during the Russian campaign, and which wiped out almost the entire imperial army.
It would herald the fall of Napoleon with Prussia and Austria joining forces with Russia to strike the army back toward Paris, which, in March of 1814 they would force to surrender, forcing Napoleon’s deposition and first exile to the island of Elba.

In our drawing you can see a regiment walking in a stark and cold forest lead by Napoleon or possibly the Marechal Ney, the contrast between the column of soldiers and the vastness of the scenery around them, is poignant. The cold seeps from the drawing giving us a glimpse of the terrible conditions of this campaign.
Charles Henri PILLE was born in 1844 in Essomes Sur Marne and studied Art under Felix Joseph Barrias.
Quite talented he submitted his first painting to the Paris Salon in 1865. In 1869 he went on to win a first Gold medal from the Ministry of the Emperor’s household and Fine Arts.
Twenty years later he was given a Gold medal at the 1889 Paris Exposition.
His work was often historically related.

He was particularly known for his watercolors and Ink or his pencil drawings.
He made numerous illustrations for magazines and newspapers and was a favorite of the Art Community of Montmartre.
Vincent Van Gogh, having met him in 1875, was a fan his and repeatedly expressed his admiration for his work
Henri PILLE was awarded the Legion d’Honneur in 1882 and was elected President of the Society of Illustrators.
He passed away in Paris in 1897.

The Ink drawing is beautiful and signed on the bottom right.
It can be compared to the drawing of the same army by Charles Henri Pille ‘Soldiers marching in water” that can be found at the Metropolitan Museum of Art.