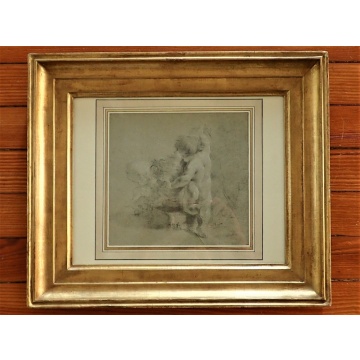 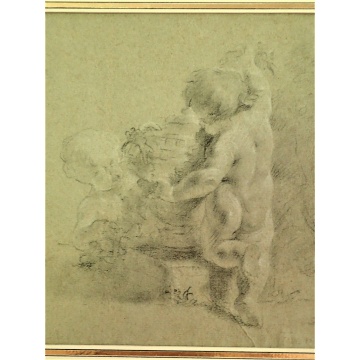 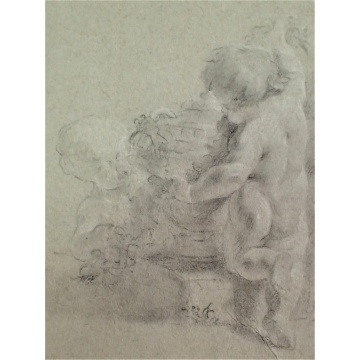 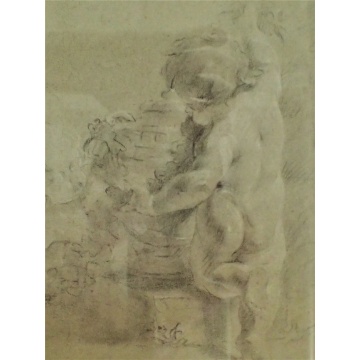 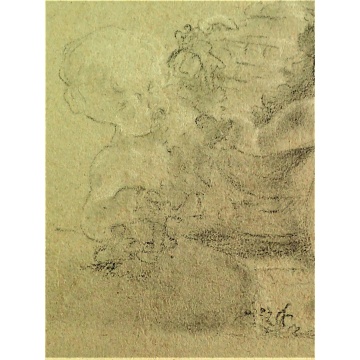 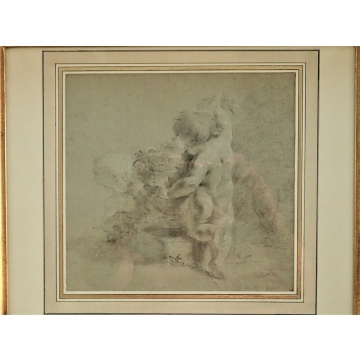 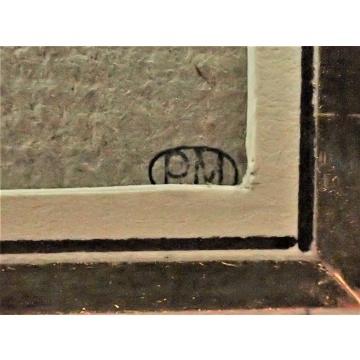 This delicate drawing shows the two cherubs playing around a Medicis shaped planter overflowing with flowers.
The artist worked on a more contrasted design, giving roundness and more shading to the first putto, while the other one is just added in the background.

In each case however, the drawing is lovely with the lead pencil used as the main utensil and white chalk used to highlight a couple of facial features and the roundness of a hip and a face.
The two chubby protagonists are very cute!

The drawing bears the Collector’s Mark of Paul Mathias Polakovitz, registered under Lugt 2010 and featuring his initials PM in a blue oval form.
This wonderful collector was a journalist, born in Budapest in 1921 and who passed away in Paris in 1987.
Mathias, as he was widely known, studied in Switzerland and in England where he met and befriended the Shah of Iran. By 1949 he had moved to Paris where he embraced journalism. Hired by Paris Match, his talent for storytelling and his good looks made his ascension an easy one. In 1960 he was appointed as the Bureau Manager in New York. There he would cement his reputation by befriending many well-known socialites and international personalities. By 1969, he had decided to leave journalism behind in order to dedicate his full time to his passion: Drawings!
He often told the story that this passion was ignited by a 17th Century French drawing gifted to him by Jackie Onassis.
His passion was identifying the drawings origins and linking them to their creators and to the painting they served as preparatory work for.
His collection grew to more than 4000 thousand drawings, mostly from the French and Italian School. In 1987 he gifted the main part of his French Drawing collection, consisting of 3000 pieces, to the Ecole des Beaux Arts in Paris.
The remainder of his collection was dispersed at three main auctions: in 1988 in Paris, then again in 1989, and finally in 2018.
An incredible connoisseur he has marked the world of Drawings for years to come.