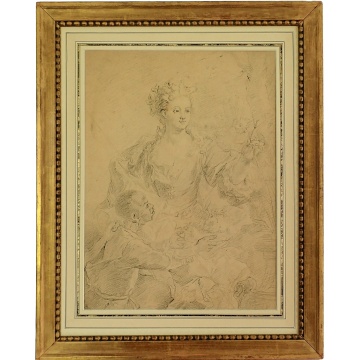 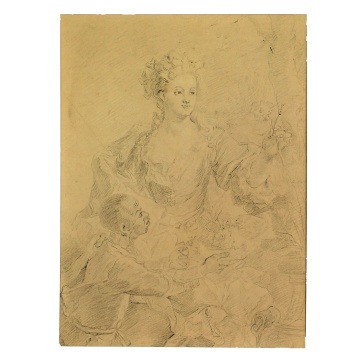 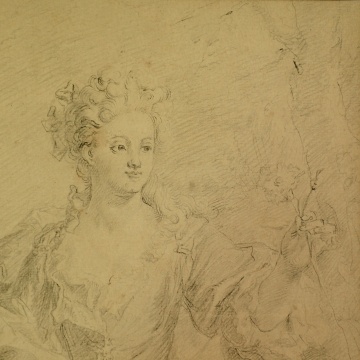 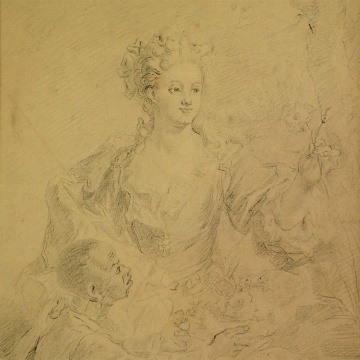 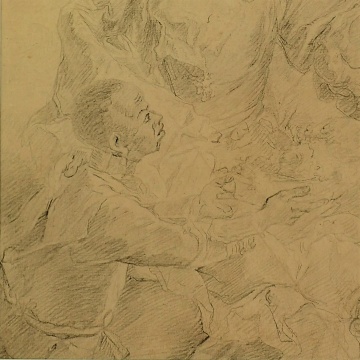 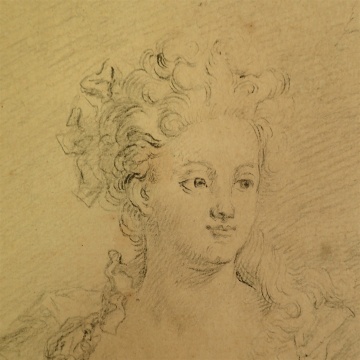 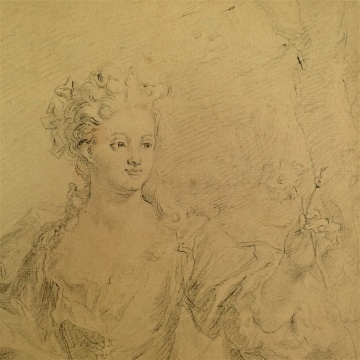 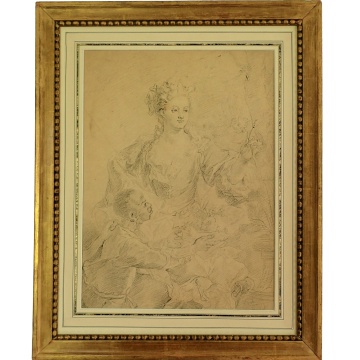 This drawing has a long history.

Hyacinthe Rigaud, whose original name is Hyacinthe François Honoré Mathias Pierre André Jean Rigau y Ros, (baptized July 18, 1659, Perpignan France —died Dec. 29, 1743, Paris), is considered one of the most prolific and successful French portrait painters of the Baroque Period.
He was trained in Montpellier before moving to Lyon and finally to Paris in 1681, where he devoted himself to portraiture.
By 1688, when he received his first royal commission, he already had a considerable reputation among the wealthier Upper Class of Paris. From 1690 onward, his work, primarily for the court, consisted almost entirely of portraits. A private ambition was realized when he gained admission to the academy as a historical painter in January 1700.
He excelled in the great formal portrait, as in his famous painting of Louis XIV in his robes of State executed in 1701 and which hangs today at the Louvre

Famous in Rigaud’s catalog for the influence it had on the fashion of the artist’s representations of female models and for its success, particularly in Italy, the portrait of Catherine-Marie LeGendre de Villedieu (1682-1749) is the first known prototype of this type of posture.
Unfortunately, not located today, the painting is known only by the superb engraving made by Simon Valée and by painted copies with some variations in the background (a statue of a Sphinx on a pedestal instead of the traditional landscape), meager testimonies of the numerous repetitions that were made during at least a decade.

Our lead pencil drawing is after the engraving executed by Simon Valee.

The model was one of seven children born to Thomas II Le Gendre (1638-1706), a wealthy silk merchant, banker and shipowner from Rouen, Sieur de Romilly. Originally from Quevilly, his father had been knighted on June 9, 1685.
In 1706, Catherine-Marie will ask Rigaud for a large-scale portrait, showing her with one of her brothers, Thomas III Legendre (1673-1738), lord of Colandre and Gaillefontaine, brigadier of the king’s armies. It is also known that the attitude chosen by Rigaud in 1701 served as a model for the portrait of the Marquise de Louville (1708)
The painting was then engraved by Simon Valée under the direction of Pierre Drevet (according to the collector of Drawings Mariette), around 1706 or 1709 according to Hulst, “figure up to her knees, grouped with a small black child who receives in a basket some flowers that she picks. The print is the size of a half sheet of large eagle paper and has no inscription”

Our drawing is an XVIII Century French school after Rigaud’s painting and Valee’s engraving.
The drawing shows a beautiful Watermark of a man holding a stick.
It is set in an early 19th century gilt wood frame.