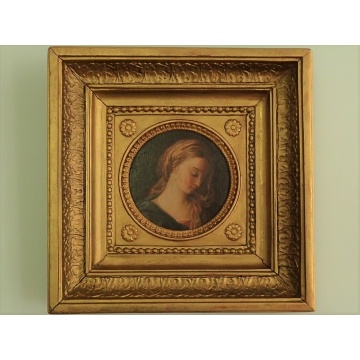 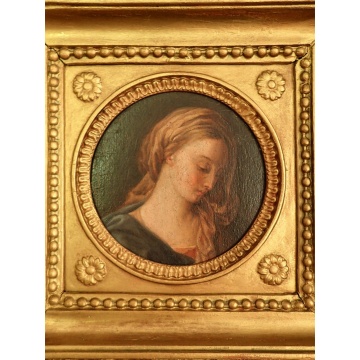 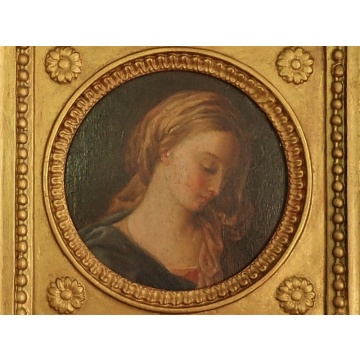 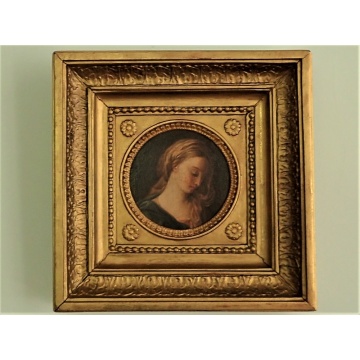 This lovely 19th Century French School Oil Painting is quite lovely and delicately becoming of its subject.
The Tondo painting itself is on a wood panel and shows Mary with her head slightly bowed to the right as if in contemplation.
The face is very softly drawn and lovely.
The painting shows a glimpse of a draped blue cloak on top of a light colored dress, a vestment we have grown used to seeing in a lot of the Madonna’s representation…But was it always the case?

Well not if you consider the very early representation of the Virgin….

Allow us a little background into the world of colors…
If you look into the Greek and early Italian culture you will discover that the Ancient Greeks saw the see ‘green’, and the Romans saw the sky lightly yellow…
Historians of the 19th century thought that the Greeks did not see blue. But this was not a problem of vision, but rather a concern of vocabulary and society. The color blue played such a minor role that there was no word in Greek or Latin for it. This marginality is such that, during the formation of Romance languages, it is a vocabulary from Germanic or Arabic cultures that is used to create the words “blue” and “azure”.
Imagine that among the Romans, this color was associated with the barbarians: having blue eyes was considered strange and foreign, and no one wore clothes of this color before the 3rd century.
But little by little blue would pass from the color of the barbarians to the color of the divinity.

The 12th and 13th centuries marked a “blue revolution”.
This revolution was born of theology. God is a god of light and this light manifests itself in two ways: divine light (lux) and earthly light (lumen).
In order to differentiate them it was necessary to find a technique in images. This is how the sky, the atmospheric layer, became blue, whereas gold was used to represent divine light and the sky or heavenly paradise.
A group of Italian painters from the Trecento, led by Giotto among others, wanted to insert these new principles into art, thus heralding the Renaissance.
At the same time the characters painted took on increasingly human attitudes in real environments, closer to everyday reality.
The vault of the Scovegni Chapel in Padua, painted by Giotto, illustrates the two different lights, placing the saints in medallions on a golden background, separated from the blue starry sky.

But back to our main subject; In religious art, the Virgin is almost always depicted with a blue cloak. The reasons for this choice have more to do with devotion than with theology.
In the Middle Ages, the Marian cult was in full expansion. At that time, the choice was made to dress the Madonna in a color with expensive pigments.
Lapis lazuli was so precious that it cost as much as gold, if not more.
That is why these pigments were chosen and reserved for the representations of the Virgin.
But if you look back at Byzantine art, the Madonna was often depicted with a black mantle as a sign of mourning for the death of her son.
When later blue became her color the King in France would adopt it as well, after all in France the King was considered the ‘Anointed one’ given the Kingdom of France by God. Philippe Auguste and then St. Louis wore a blue cloak, and this habit spread to the European courts.

Our painting shows light age marks on the sides.

Our lovely Painting has a 3.54 inches diameter
The 19th Century Gilt Wood frame measures 8.85 inches on each side.