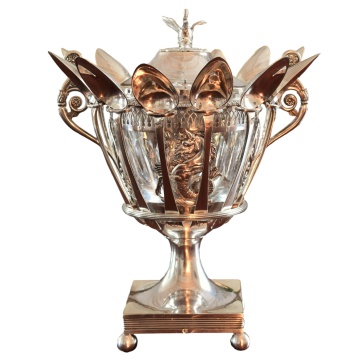 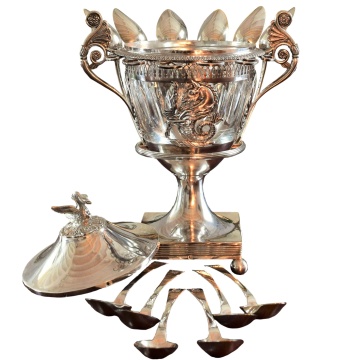 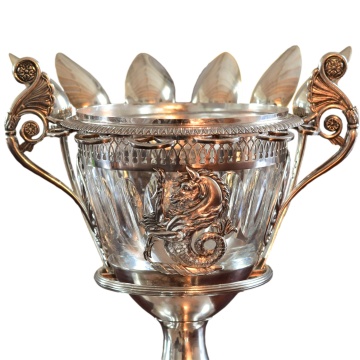 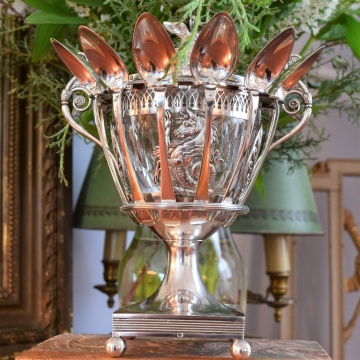 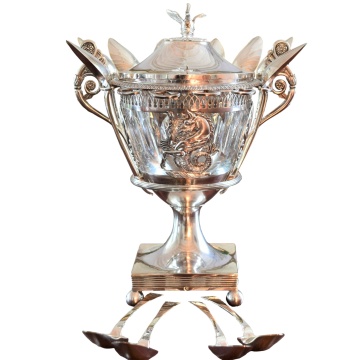 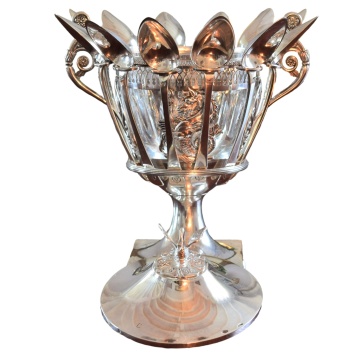 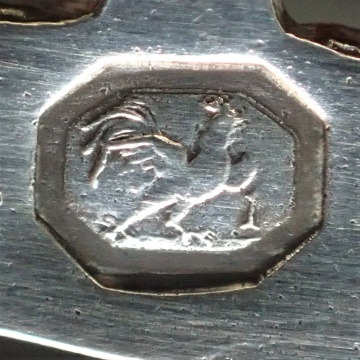 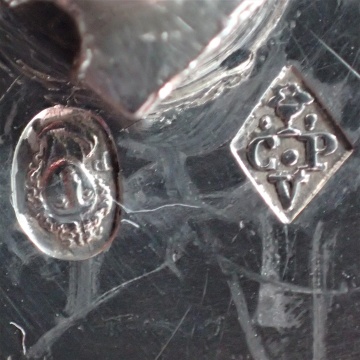 Though the name indicates a connotation of Jam, it is actually a magnificent Sugar bowl with its individual spoons around it.
This Sugar bowl imitates the shape of the Medici Vase. It houses a cut Crystal interior, and rests on a square base with four silver pearls.
The openwork body has four tableaux. Two on the sides showing palmettos.
But the front and back registers are the true stars showcasing a beautifully detailed Hippocampus.
It is the mythical sea-horse, which, according to the description of Pausanias, was a horse, but the part of its body down from the breast was that of a sea monster or fish. The horse appears in the Homeric poems as the symbol of Poseidon, whose chariot was drawn over the surface of the sea by swift horses. The later poets and artists conceived and represented the horses of Poseidon and other marine divinities as a combination of a horse and a fish.
The Marine creature is beautifully detailed! This is the first Confiturier we have found with this décor.
The silver lid has a charming finial representing a swan with outstretched wings resting on an acanthus leaves crown.

The edge of the frame has an openwork network allowing twelve spoons to slide in.
The Particularity of these pieces, is that the Maître Orfèvre who did the main object, did not create the spoons…
The spoons were always ordered from a Cuilleriste (Or Spoon Maker) who specialized in them.
The twelve spoons share the same ‘Poinçon au 2ieme Coq’ or 2nd Rooster Hallmark. The Spoon Maker was Pierre Joseph Dehanne.

The Makers Mark is for Maître Orfèvre CP Vahland.
It shows his initials with a Cup on top. The Cup has two birds resting on its rim.
His marked was registered in 1810.
His workshop was located first 20 Cour du Harlay, then 14 Quai des Orfevres.
His work can be found until 1822.