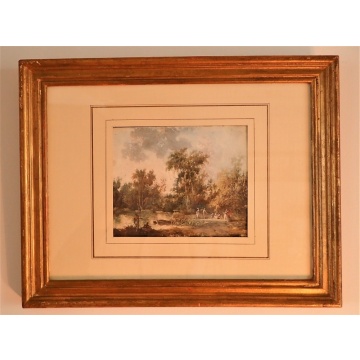 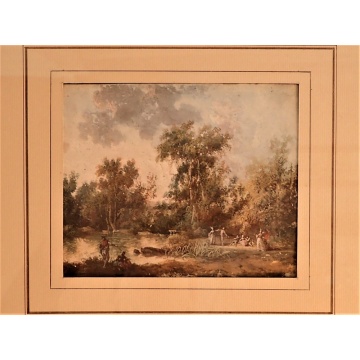 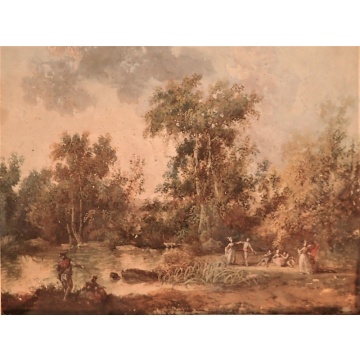 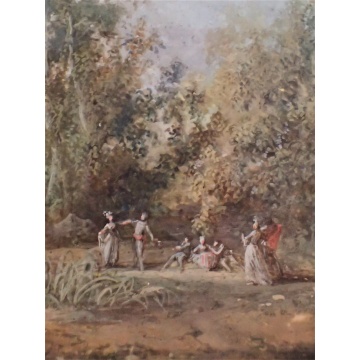 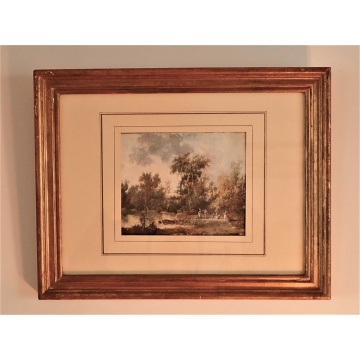 Lovely Gouache Of An Animated Landscape Attributed to Bélanger

Lovely Gouache Depiction Of an ‘Afternoon by the Pond’, or an Animated Landscape attributed to Louis Bélanger.
Done in gouache, the favorite medium of the painter, it shows a small party of well-dressed ladies and their suitors relaxing by a pond, while a little further, two members of the party are seen fishing.
The use of the colors is very soft and very precise creating a lovely impression on the viewer.

The painting was first attributed to Moreau, but later to his talented student, Louis Bélanger .
It was appraised by the Cabinet De Bayser in Paris.

Louis Bélanger (1736-1816), the younger brother of Architect Francois Joseph Louis Bélanger, sometimes also spelled Bellanger or Bélangé, was a landscape painter and draughtsman, with a particular speciality of gouache views of sites in France, Italy and Switzerland.
A pupil of Francesco Casanova and Louis-Gabriel Moreau l’Aîné (1740-1806), he was what would now be called an ‘early adopter’ of watercolor and gouache for landscapes. A great traveler, they became his mediums of choice for making a variety of topographical depictions.
His earliest such known production was up to 2012, is a View of the Banks of the Saône near Lyon, signed and dated Bélangé à Lyon 1779, in the Musée des Beaux-Arts of Orléans, but in 2012 a Dutch-influenced River Landscape with a Herdsman and his Stock on a Road, in watercolour and bodycolour, signed and dated 1777, was auctioned in Paris.
In the 1780’s he travelled throughout France, as well as to Switzerland, Italy and England.
He went on to provide illustrations for the Description particulière et générale de la France (1781-1796); and travelled to Italy (1780-1785), where his surname of ‘Belanger le Jeune’ was replaced with ‘Belanger le Romain’ mostly to distinguish him from his older brother, François-Joseph Belanger, draughtsman of the Menus-Plaisirs and architect of the Château de Bagatelle and several Hotels Particuliers in Paris.

With the advent of the French Revolution, he fled France and in 1790 settled in England, where he lived for eight years and provided drawings for the print market in Paris.
Bélanger exhibited landscapes at the Royal Academy in 1790 (when the catalogue described him as ‘Painter to the Duke of Orléans’) and 1797, and enjoyed the patronage of a number of English connoisseurs, some of whose London homes he decorated.

After a brief visit to Switzerland in 1798, Bélanger moved to Sweden, where in 1799 he was elected to the Academy of Fine Arts in Stockholm and appointed Painter to King Gustav IV. He lived and worked in Sweden for the last eighteen years of his career, and in 1803 published a series of prints entitled Voyage pittoresque de la Suède. A number of paintings, watercolours and gouaches by the artist are today in the collection of the Nationalmuseum in Stockholm.

Our charming painting is done on a wood panel.
It measures 6 inches by 5 inches.
The Frame in 20th century and measures 14 inches by 11 inches.

It was purchased in Paris in April 2019