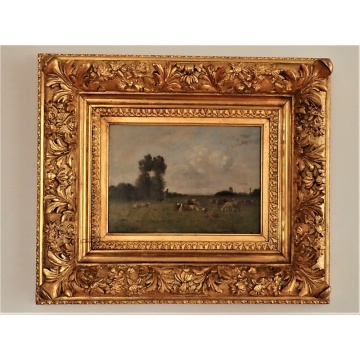 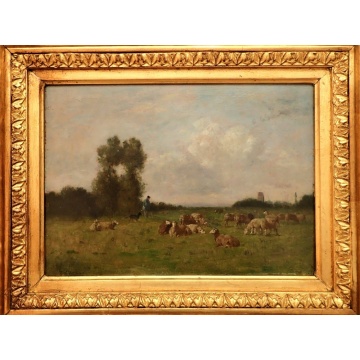 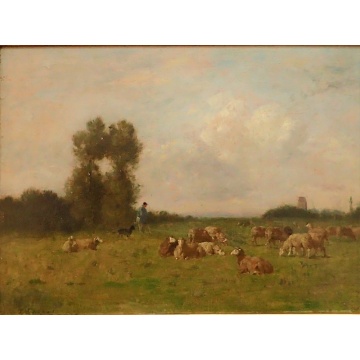 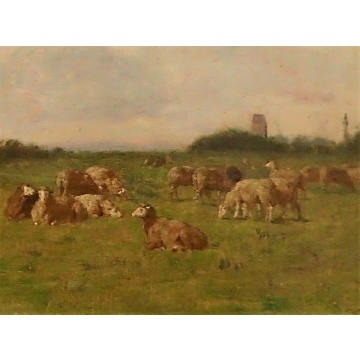 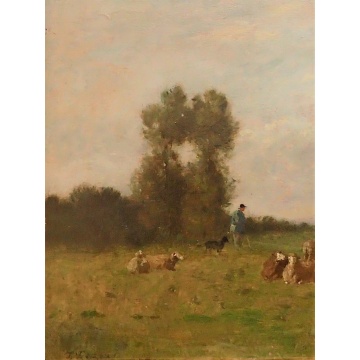 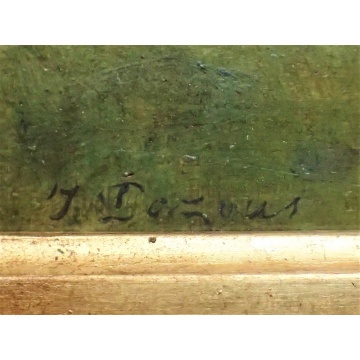 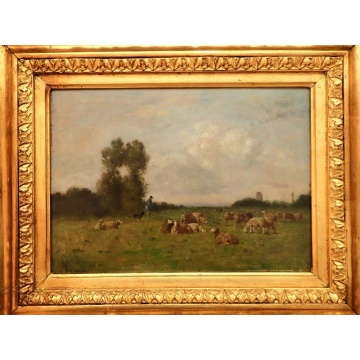 Lovely Oil Painting Of French Pasture And Sheep By Pezous~Sold~

A Lovely and delicately colored Oil Painting of A Shepherd and his flock of sheep in French Pastures by Jean Pezous.

We particularly love the gorgeous rendering of the Sky and its transparency, typical of the Barbizon teachings, which were given to him by Camille Corot between 1870 and 1874. The nuances of light blue with touches of pink dusted by the fading sun on the clouds are lovely.
The flock of sheep are also were delicately painted giving nature a precedence over man, as the shepherd is much detailed and seems to hover as an afterthought.

Born in 1815 in Toulon, Jean Pezous entered at the age of fifteen in the workshop of the Navy directed by Sénéquier, and received the teaching of Courdouan with whom he makes his first landscapes. He arrived in Paris in 1833 thanks to his protector, Mr Dupont, a notable of the Navy and a friend of Toulon’s arts, and studied at the Beaux-Arts de Paris under the direction of Orsel.
As an only son, he lost his parents at the age of twenty and never returned to the South of France after their death. The painter settled in Sologne after 1848. His contemplative character led him to paint landscapes in the spirit of Corot.
Focused on the feeling of painting rather than on the market value of art, the artist, compared to the famous Meissonier (1815-1898) during his lifetime, was in search of poetry. Some anecdotes tell that his free and disinterested spirit prevented him from giving a price to his painting that the director of a Salon was coveting!

If they are grandiloquent painters, who favor subjects of history, hunting and myths, Jean Pezous, for his part, is a painter of bourgeois tranquility and country life. He has painted popular subjects (such as Harlequin and musette balls…), and mostly country sceneries. The sensitive nature of the painter is evident in this painting, which is pleasant and appealing. A true colorist, the artist nuanced the tones, with a very refined palette. He suggests the light by spontaneous touches which add just enough depth…..
A lovely painting.

The frame is gorgeous 19th century gilded wood piece in perfect shape!
The painting is signed by Pezous in the lower left corner and on the back of the wood panel.