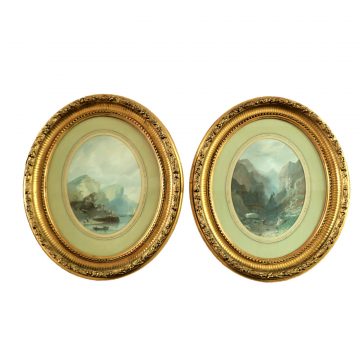 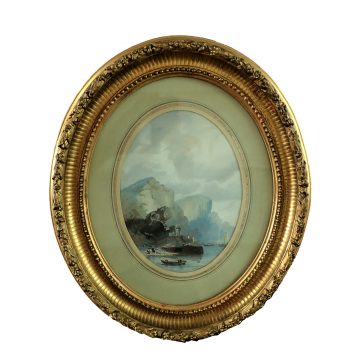 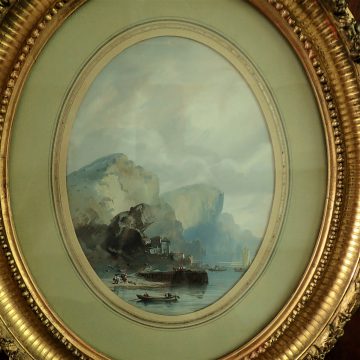 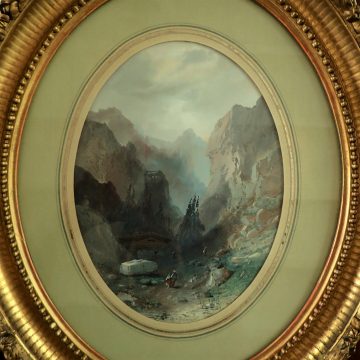 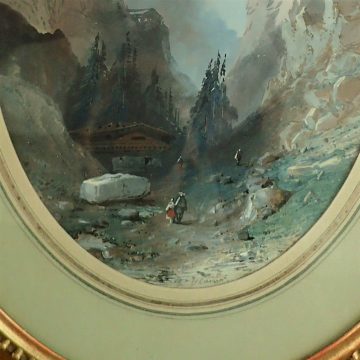 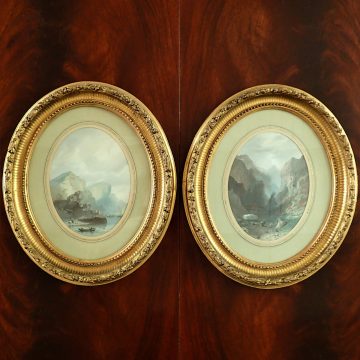 This charming pair of Watercolor capture for one and Mountain scenery and for the other a Lake landscape.

The delicate use of the watercolors is perfect for the subject at hand and the colors are laid in delicate nuances typical of Cicéri’s style.
In both paintings Ciceri’s beloved mountains are also represented.

The paintings are presented in their period carved and gilded wood frames with a frieze of laurels and laurels and pearls.

He received his first education from his father, as well as from his uncle Eugène Isabey.
He worked on landscapes in Fontainebleau and its surroundings and was one of the first artists to settle in Marlotte a village where he moved in 1849. He was also very much influenced by the Barbizon School.

Ciceri’s landscape painting, which became the basis for the rest of his career, reflects the typical concerns of these innovative artists: the preservation of France’s rural landscapes, an awareness of the sanctity of work, and the danger of the encroachment of industrialization on a once bucolic environment.
He exhibited for the first time at the Salon in 1851. The following year, his ‘Vue prise au bord du Loing’ earned him a medal. He would from then on, regularly participate in the Salon.
A Painter and watercolorist, he sacrificed to the fashion of the “travelling artists” visiting most of France, but also Switzerland and Germany, and published collections of lithographs from his drawings, which show a more marked concern for realism than his romantic predecessors, using the new medium of photography as documentation.
His landscape painting evolved in concert with the emerging modernist developments of the Second Empire and Third Republic.
His travels to North Africa, produced more exotic subjects from 1869 to 1877 but his focus remained the French countryside, favoring particularly the Fontainebleau area as well as Normandy and the Alps.
Like his father, he also painted theater sets.
Eugene Ciceri’s work can be found in the Louvre and throughout National Museums in France, but also in the Getty Museum in Los Angeles, The Metropolitan Museum in New York, and in Berlin among other Museums.