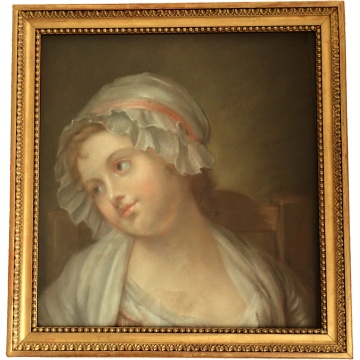 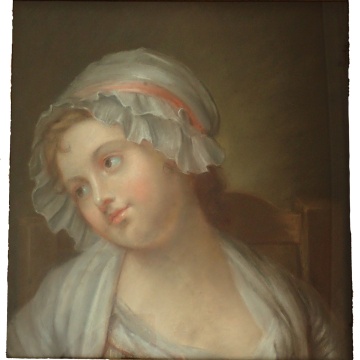 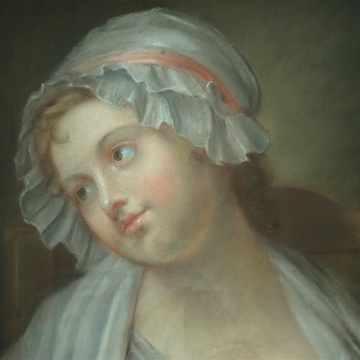 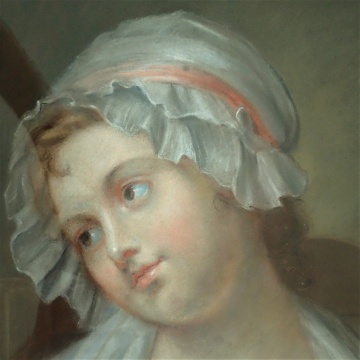 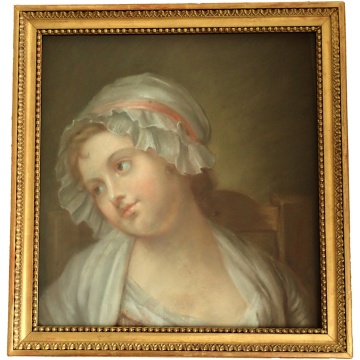 Lovely Pastel Portrait Of A Maiden After Jean Baptiste Greuze

This lovely Pastel work is directly taken from the Jean Baptiste Greuze’s repertoire.

The original work is an oil painting, attributed to Jean Baptiste Greuze and can be found at the Royal Collection Trust in England.
Titled ‘A Young Girl’ it was gifted to Queen Victoria in 1840.

In our edition of this portrait the pastel used reproduce the sensitivity of the young woman to perfection.
The skin is near translucent and her gaze is full of longing yet soft. The roundness of her cheeks attest to her very young age, yet her clothes are those of a young woman. It is a study in nostalgia and youth.

Jean-Baptiste Greuze (1725-1805) enjoyed early success at the Salon of 1855 with his painting A Father Reading the Bible to his Children (Louvre, Paris), and subsequently his sentimental genre scenes earned him huge acclaim. Greuze specialised in painting popular scenes from daily life, rich in detail and moralising or sentimental in content. He invented new subjects and had engravings made after his paintings which ensured a wide audience for his work. When he first exhibited at the Paris Salon his paintings were greatly admired, but he was disappointed to qualify for entrance to the French Academy only as a genre rather than as a history painter. He was born in Tournus and studied in Lyon before moving to Paris. Greuze spent two years in Italy and was inspired by the emotional character of Guido Reni’s paintings.

In portraiture, which Greuze would have been obliged to pursue for financial reasons, his achievements are underestimated. Not only was he skilled at the polish and detail that important clients such as the Comte d’Angiviller required, he was also aware of the demands of fashion, and he was cognizant of character and could be a convincing naturalist, drawing attention to the spark of an individual personality. Greuze was an advocate for, and an exceptional exponent of, a particular genre that is an offshoot of portraiture, the so-called expressive head. These studies, painted and drawn, looked back to work by the Académie’s founder Charles Le Brun, but at the same time reflected the curiosity about emotional and intellectual development in children that was current in Greuze’s time and, more generally, expressed an inclination toward the open expression of sentiment (not sentimentality) that was so prevalent. Admired in the nineteenth century and disparaged or overlooked in the twentieth, many of the studies of emotional states are exceptional works of art.

His paintings and drawings and can be found at the National Gallery, but also at the Metropolitan Museum and of course at The Louvre Museum.
Our piece is done in Pastel in a lovely manner.