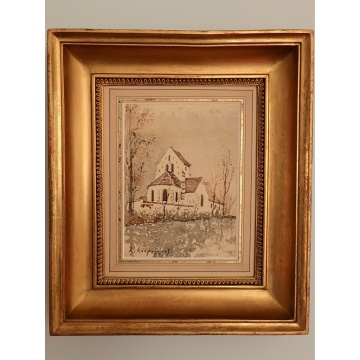 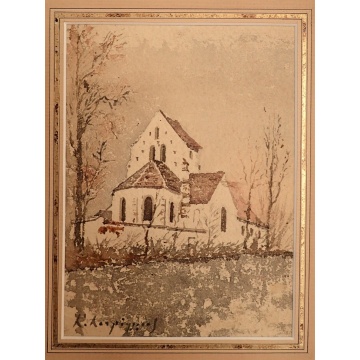 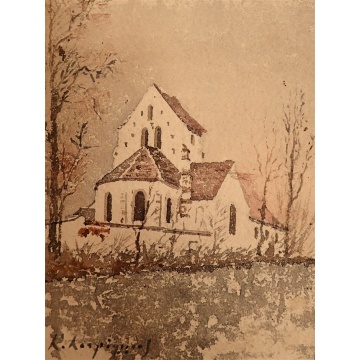 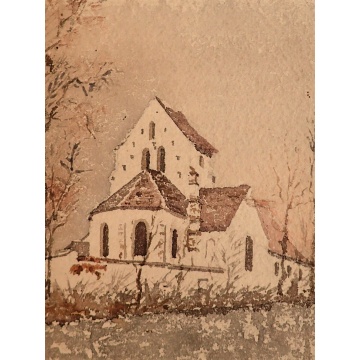 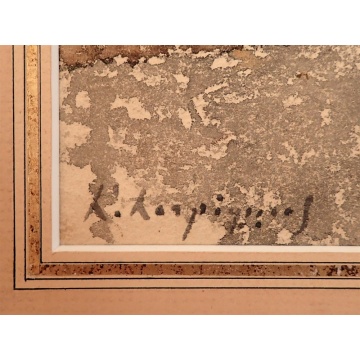 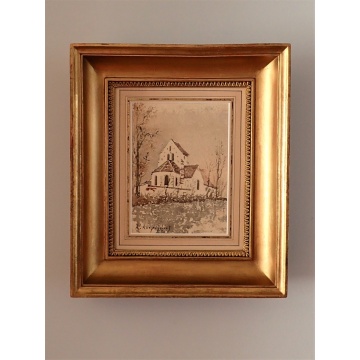 Lovely Watercolor Of A Romanesque Church By Harpignies~Sold~

A Lovely subtle toned Aquarelle Drawing Of A Romanesque Church by Henri-Joseph HARPGINIES.
Here the colors are very subdued but infused with a wintery light that has you smelling the incoming snow…The shades of grey green on the land fading to a lighter grey in the sky.

It is signed at the bottom left hand side H Harpignies.
This lovely watercolor will be included in the Catalogue Raisonné being prepared by Jean Pierre Cappoen.

Henri-Joseph Harpignies was born July 24, 1819 in Valenciennes. His parents were of Belgian origin and came to France and established a sugar beet factory in Famars around 1825, working in this as well as a number of other jobs.
Though he showed interest in drawing and painting at a young age, his more serious training began in 1846, when he studied in Paris with the landscape painter Jean-Alexis Achard. In 1849, Harpignies traveled to Germany and then to Rome. It was there that he seemed to find his greatest influences, both in the landscape of the countryside and later in the painter Corot.

Though known often as part of the Barbizon School, Henri-Joseph Harpignies’ life extended beyond the span of many artistic movements in France.
During his youth the Barbizon painters were challenging the classical landscape tradition and forcing the public to recognize that landscape painting should be appreciated as an art equal to that of historical or mythological painting.
During the latter half of his life the movement of Realism was still exerting its hold over artists, influenced by the social situations of the day, and Impressionism and later Post-Impressionism began their own search for new representations of landscape and its effects. While Harpignies began his public career rather late in life, comparatively speaking, he clearly was most affected by the earlier interests espoused by the landscape painters of the first half of the nineteenth century, mostly Jean-Baptiste-Camille Corot. Harpignies lived through a number of changing styles but remained steadfast in his appreciation of landscape painting and especially views of Italy.
Between 1864 and 1866 Harpignies exhibited watercolors at the Salon, each depicting different views of the Italian landscape. His curiosity about other media began early on in his career under the influence of Achard, who was also an engraver.
In 1847 he began experimenting with engraving and by 1851 began working regularly in watercolors. It was not until 1864, however, that he began to exhibit at the Salon des Aquarellistes and not until 1881 that he was elected a member of the Société des Aquarellistes Français. He also began selling his watercolors to art galleries in both New York and London, accumulating about 70,000 francs per year on these commissions alone.

From the early 1900’s onwards, he began to substitute charcoal for watercolor, and his drawings take on a silvery-grey tonality that is perhaps indicative of his failing eyesight. Nevertheless, Harpignies maintained an emphasis on a distinctive manner of tonal landscape, inspired by Corot, in the paintings and drawings that he produced well into the early years of the 20th century.

Despite his increasing fame and success, Harpignies seems to have remained at heart a man of simple tastes, committed to his art.
He passed away in 1916.