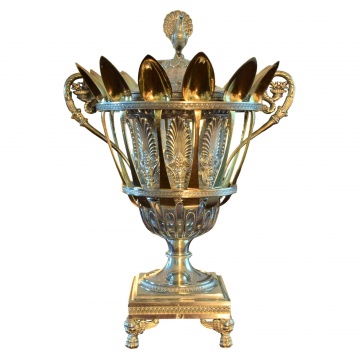 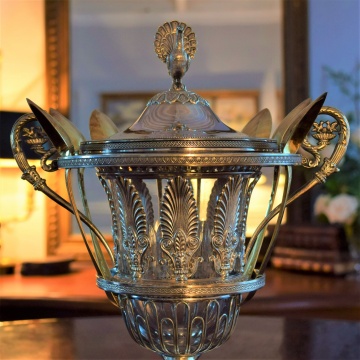 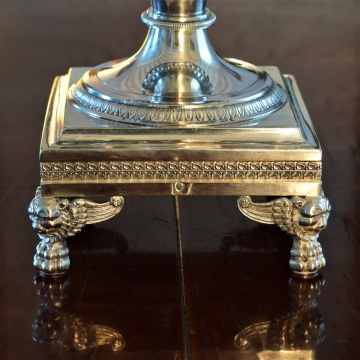 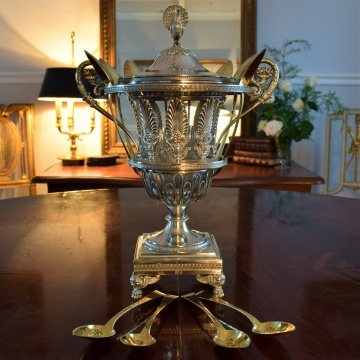 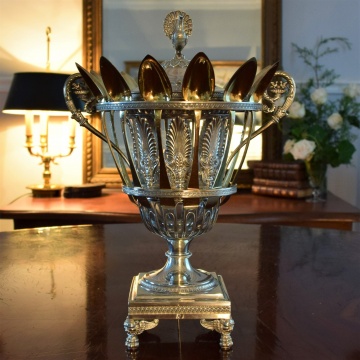 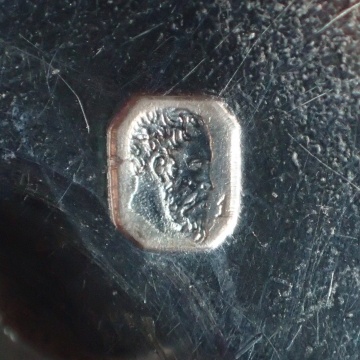 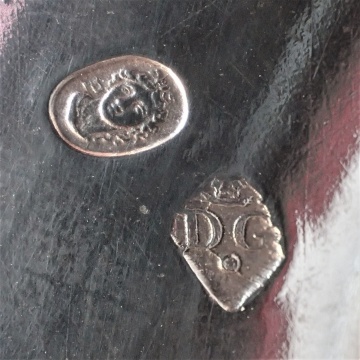 They were know as either ‘Drageoir’ or ‘Confiturier’ but the only official name was a ‘Confiturier’ (Hence a Jam container), and originally, they were only thought of and used as Ceremonial Sugar Bowls.

The body of this ‘Confiturier’ is Medicis Vase shaped with beautifully detailed large Palm Fronds decorating its surface for a total of eight figural ‘Tableaux’.
The handles are another highlight of the piece ending in a charming birds nest with two tiny doves stretching their wings. lionesses’ heads connect to the rim by resting on a bundle of grapes. The handles are also engraved with acanthus leaves.
The square base rests on beautifully carved winged lion’s heads and paws.
The ‘Frétel’ (or finial) is exquisite in the form of a Peacock resting on a base of acanthus leaves.
This is the first time we have managed to find one with this finial.

The bowl insert is white crystal with ‘facettes’, it is original and intact.
The piece’s size is quite impressive making for a beautiful statement.

For the Collectors, this piece shows also the Jeanette Révolutionnaire or Paris Mark for 1793.
The Mark was used for object minted in 1793. It was in use for a year and shows the head of a woman facing forward with a P on the left-hand side. Starting 1794 and until 1797 the Head of the woman showed a 1 on the right.
The Marking system then adopted the new regime marks that went into effect from 1798 until 1809.
Hence this piece was started by a predecessor of Garreau, then finished by him.

The Particularity of these pieces, is that the Maître Orfèvre who did the main object, did not create the spoons…The spoons were always ordered from a ‘Cuilleriste’ (Or Spoon Maker) who specialized in them.
The twelve spoons share the same ‘Poinçon au Vieillard’ or Michael Angelo Hallmark. The Spoon Maker was Jean Baptiste Andrieux who registered his Mark in 1820.

The Maker’s Mark as that of D GARREAU. It shows a D and s G topped by a ‘Navette’ (or boat)
Garreau was the successor of Ambroise MIGNEROT and specialized in larger decoration pieces, particularly “Drageoir’s” and Oil and Vinegar Cruet stands.
His mark was registered in 1817. His offices were located at 62 Rue du Temple in what is today the Marais area of Paris.