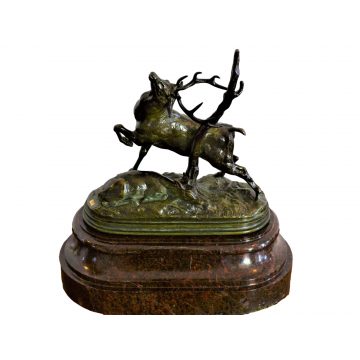 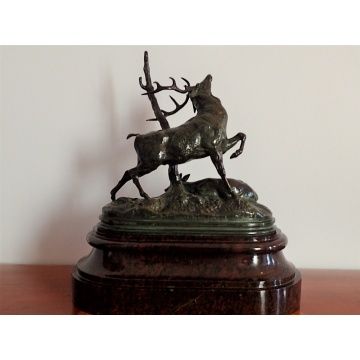 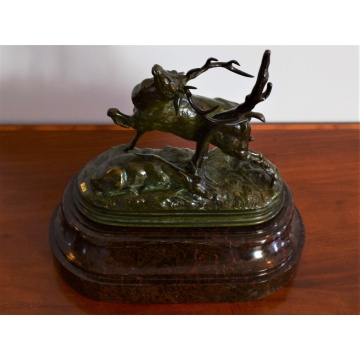 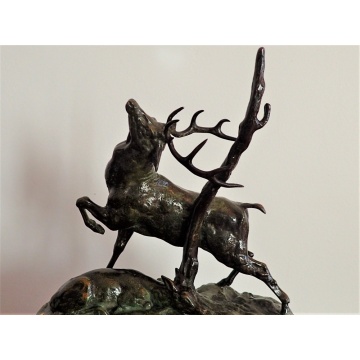 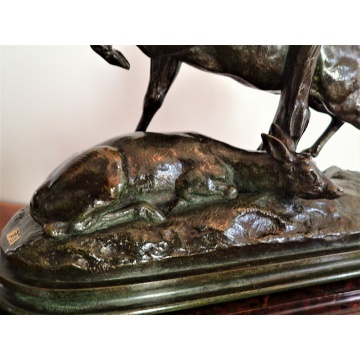 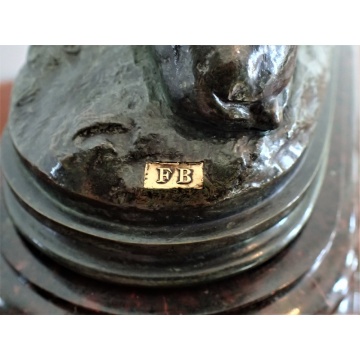 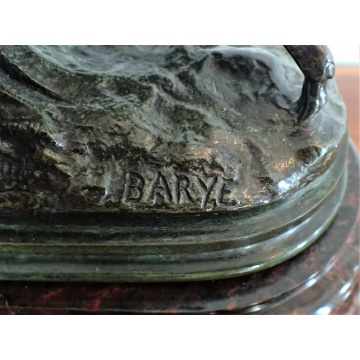 A Very Majestic Bronze Sculpture of a Stag and his Fawn by Antoine Louis BARYE.

In this powerful yet lovely sculpture, Barye steers clear from the scenes of attack that he often favored, to represent a beautiful scene of a Stag rubbing his antlers against a tree stump while keeping watch over his fawn.
The first edition of this gorgeous work was done between in 1857 by Barye.

Our model is referenced in the Poletti & Richarme ‘Barye Catalogue Raisonné des sculptures’, on page 293, as number A 157.

Once again Barye captures incredibly well this scene…
Here Barye uses the image of the Stag with his front leg raised and accentuates its movement by counterbalancing it with the shape of the Tree stump.
The fawn is directly taken from his sculpture of the ‘Spleeping Fawn’ which he first sculpted in 1840.
Once again an incredible piece…by the Artist that became known as the Master of the Animalier sculptors in 19th century Paris.

Another particularity of our Sculpture is the Gold FB Stamp located on the left hand side behind the fawn.
André Fabius, a specialist in Barye sculpture, states that this stamp was used between 1876 and 1889.
The presence of this stamp is a guarantee of quality, the castings and patinas are moreover generally of a particularly gorgeous quality.

In the case of our sculpture the beauty of the Green Patina is more then evident and the chiseling is exquisite!

Another gorgeous feature is the Incredible and very rare (we have only seen it in one other instance) Griotte or Morello Cherry Colored Marble Stand which gives the sculpture an even more amazing standing.
With the Griotte Marble Stand the total height of the piece is 11.02.
The measures given above are those of the Sculpture without the Marble base.

Barye was responsible for improving the status of animal sculpture, a category famous since antiquity, and for demonstrating its suitability as a modern expressive form. He also gained special fame as an artist who, regardless of subject matter, could meld grandeur and artistic refinement with realism in both public monuments and small-scale bronzes for the home.
While Barye excelled at sculpture, he often faced financial burdens due to his lack of business knowledge. In 1848 he was forced to declare bankruptcy, and all of his work and molds were sold to a foundry. By 1869 Barye no longer produced new works.
After Barye’s death (which occurred in June 1875) in 1876 what remained of Barye’s inventory, 125 models, were sold to the Ferdinand Barbedienne foundry. The 1877 Barbedienne catalogue offered all of the models in bronze in variable sizes, and the Barbedienne castings were of superb quality.
Barye also held a passion for the art of the Patina with which he infused his sculptures, becoming known for his research in colors. A code which Ferdinand Barbedienne thoroughly reflected.

Our sculpture is signed BARYE on the terrace under the left hand rear leg of the Stag and in front of the fawn’s face.
The sculpture was edited by the Barbedienne Foundry and is signed ‘F.Barbedienne.Fondeur’ in the middle of the terrace, right below the Stag’s right hand side.
The Green patina is exquisite full of details and nuances, while the chiseling is outstanding in its precision and beauty.

The Sculpture is stamped with the Gold FB right behind the fawn on the terrace as described above!
The Philadelphia Museum of Art holds One model of this sculpture but it does not come with the red marble stand.