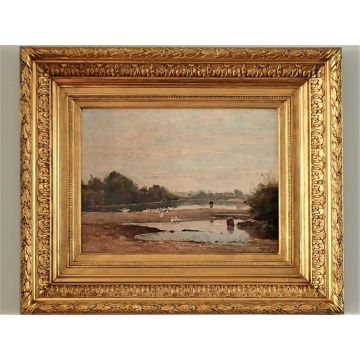 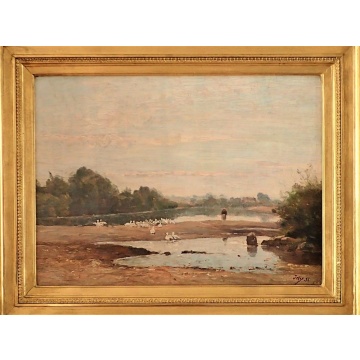 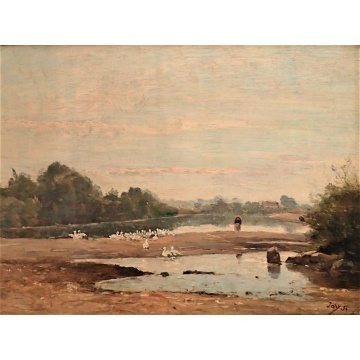 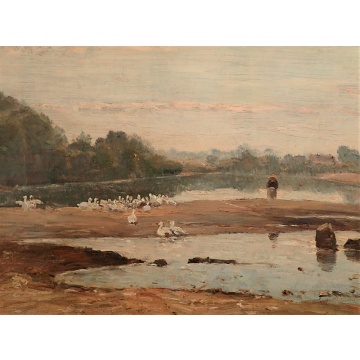 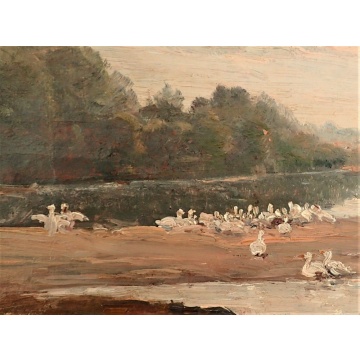 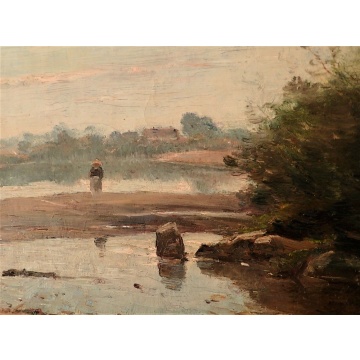 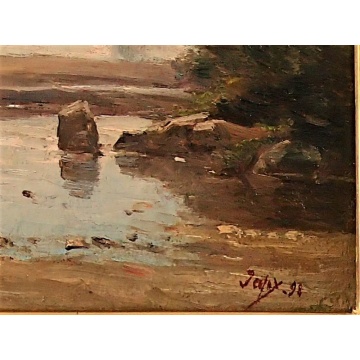 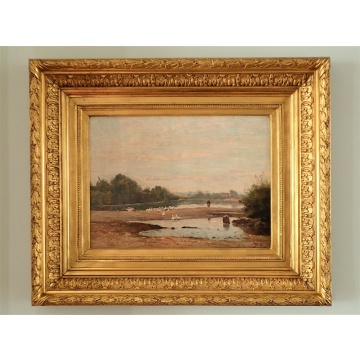 Beautiful Oil Paiting Of A Duck Shepherdess By LA Japy~Sold~

The beautiful Oil painting on canvas is signed on the right hand side by Japy and dated 1898.
It represents a shepherdess watching over a flock of white ducks by a pond. As usual with this artist the representation of nature is done with great sensitivity….

Louis Aimé Japy, was born in 1840 in the village OF Berne, part of the commune of Seloncourt, in the Doubs area of France, and died on 8 January 1916 in Paris.
By the time Louis Aimé had started his painting career, his family had already established quite a name, but not in paintings….
It had started in a small workshop founded in 1777 by Frédéric Japy, where he had renewed and mechanized the traditional process of ‘établissage’ practiced in the Jura by the watchmaking profession.
From watch movements, Japy moved on to clocks and diversified into tools, engines, bicycle parts, lighting, garden furniture, pumps, coffee grinders, typewriters, etc. The 1880s marked the Japy’s golden age. Nearly 5,000 workers worked in the Japy factories in the region. The family had thirteen castles built on Beaucourt and Dasle, and were extremely wealthy.

However, not wishing to continue in the family’s business, Louis Aimé Japy had given himself over entirely to his passion, landscape painting.
Although he was mostly self-taught, as was true for most landscape painters, Japy studied informally with both Jean Baptiste Camille Corot and François-Louis Français.
Following their example, he also traveled to Italy, long considered the standard for natural beauty, and early in his career he occasionally exhibited paintings of Italian themes.
He first presented at the ‘Salon’ in 1864 and exhibited there until the beginning of the First World War.
Japy enjoyed considerable success over a fifty-year career as a landscape artist by merging the thematic subjects introduced by the first generation of Barbizon Artists of sheep-herding scenes and woodland motifs with the misty atmospheres and idyllic calm more associated with Corot’s paintings.
As evidenced from his earliest submissions to the Salon during the mid-1860s, Japy sought a highly personalized balance between poetic ambiance and observant realism in his renditions of the Jura, Picardie and Bretagne landscapes he exhibited.
He obtained a first medal at the 1870 Salon, a second-class medal at the 1873 Salon and became a member of the Salon des artistes français in 1883.
He also received silver medals at the Expositions Universelles in Paris in 1889 and 1900.
Considered as one of Corot’s most gifted pupils, Louis-Aimé Japy knew how to translate nature with great sensitivity.

He was fond of subtle studies of light and had a delicate touch, giving the light a near quivering effect, while never neglecting the precision of the drawing.
The poetry that emerges from his pastoral scenes is often bathed in a melancholy light.

In our painting, the delicate rendition of the sky takes precedence with its transparency beautifully suffused with warmth.

He would receive the insignia of Chevalier de la Légion d’Honneur in 1906.
His works can be found in many museums of which the Musée D’Orsay in Paris, the Morlaix Museum, The Amsterdam Rijksmuseum but also in Washington DC.

Our painting benefits from a gorgeous gilt wood period frame.