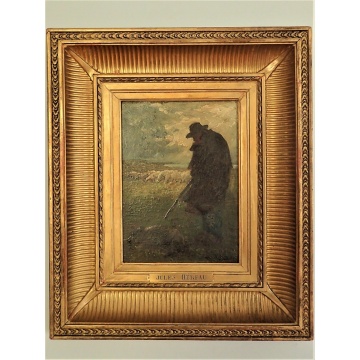 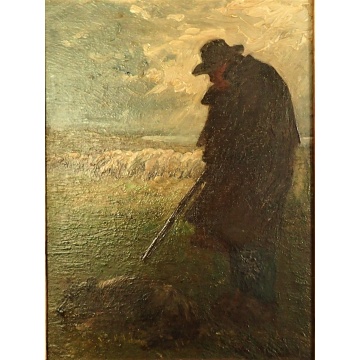 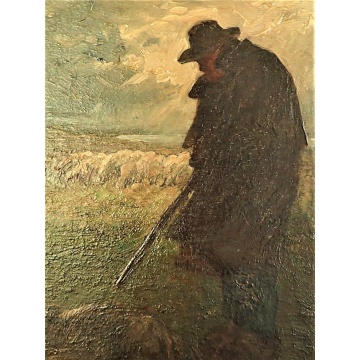 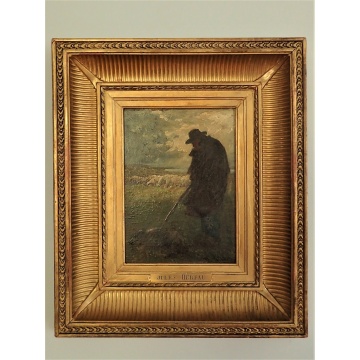 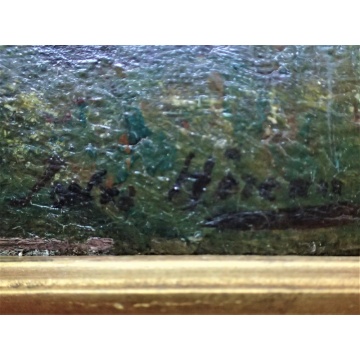 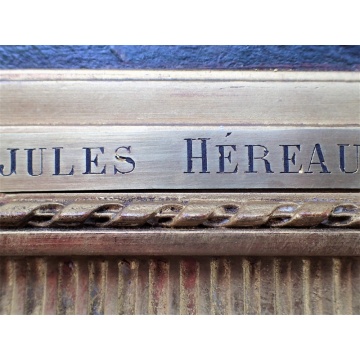 Painting Of A Sheperd And Sheep by Héreau~Sold~

A Charming Oil Painting Of a Normand Shepherd and his flock of sheep by Jules HEREAU.

Jules Edouard HEREAU better known as Jules Héreau was born in 1829 in Paris and passed away in the same city following a train accident in 1879.
A painter and draftsman he was the son of Edmé Joachim Héreau who was the Manager of the ‘Bulletin Officiel des Sciences in Paris’.
He first started his training in the architecture department of the Beaux Arts School in Paris in 1853 , soon switching to painting.
In 1854 he started meeting a group of painters in Barbizon and soon became a fixture of the Barbizon scenery.
By 1857 Eugene Scribe, the famous playwriter ordered from Héreau 6 painted panels featuring his life for his newly acquired villa, cementing his fame.
These panels now hang in the Chateau de Compiègne.
Having exposed his paintings in the Salon starting 1855, Héreau received medals in 1863 and 1868.
A bad press linked him to the Communal Movement following his stance on protecting the Louvre Museum from looters and sent him scurrying to England from where he continued painting between 1872 and 1875.
He came back to France in 1876.
Married to another painter, Constance Louise DARRU, with whom he had two children, Héreau was praised for his passion for scenic views of the Normandy countryside and the ‘Impressionist beauty’ he infused his paintings with according to the Press.

In this painting Héreau shows a shepherd leaning on his staff in a darkened pasture, with his flock of sheep gathered a little further.
The brooding stature of the shepherd as well as the lovely study of the sky show a perfect balance of light, and is typical of the Barbizon school.

Our charming painting is signed on the right hand side of the panel.

the Painting was acquired in Paris in September 2019.