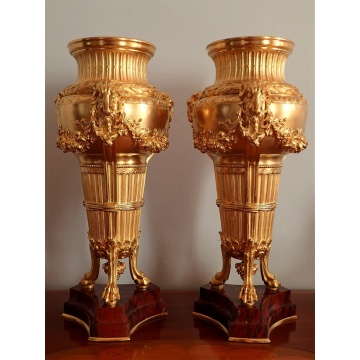 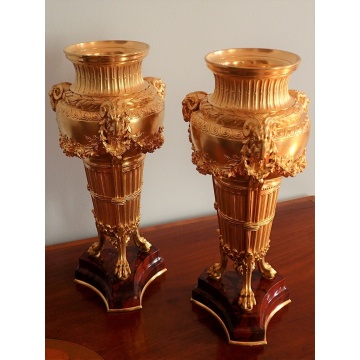 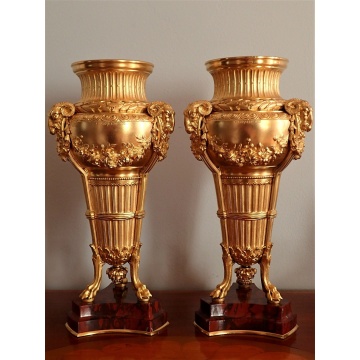 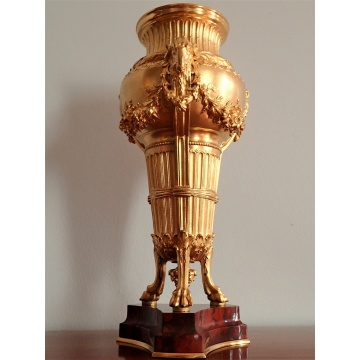 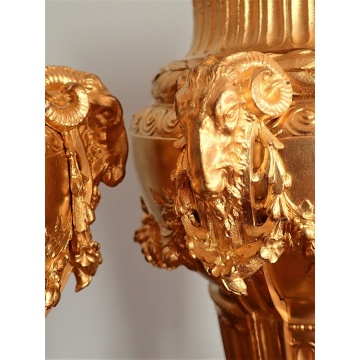 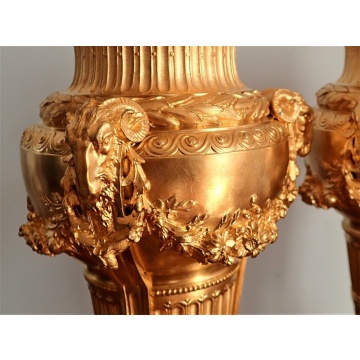 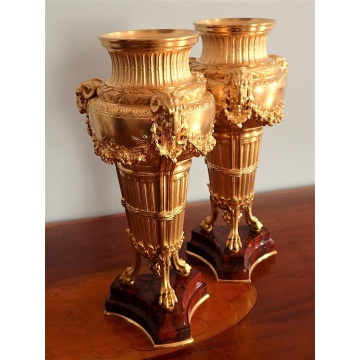 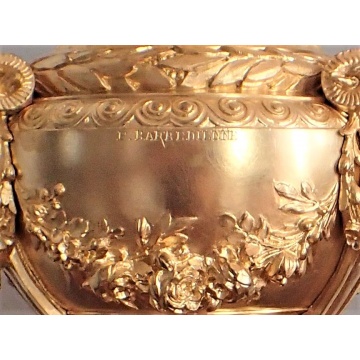 The Cassolettes are signed on the middle register F Barbedienne, as show on our 8th photo. The work is just exquisite…It is done entirely in Ormolu, or gilded Bronze, and showcases beautifully detailed ram heads on 3 sides.
The ram heads are linked by lovely rose garlands typical of the Louis XVI Style.
The upped level is decorated with a laurel wreath, while the lower part of the vase ends with three beautiful lion’s paws.
The very bottom of the base shows a gorgeous grape bundle and acanthus leaves…
The vase stands on a beautiful and rare Griotte or deep red marble base.
The delicacy of the chiseling is incredible, outlining Barbedienn’s mastery of his Art.

Ferdinand BARBEDIENNE was born in Loudon, Calvados in a small farm on August 6th 1810.
He began his Parisian Career as a wallpaper dealer, but soon met Achille Collas who had just invented a machine to create miniature bronze replicas of Antique statues.
Together they decided to appproach the Europeans Museums and began selling the perfect miniature replicas of their most beautiful Antique statues, thus deomcratizing collections and making Artworks more accessible to households.
In 1843 they expended their range to include statues made by living artists and proposed enameled works.
Barbedienne actively pursued contracts with Jean Baptiste Clesinger as well as David D’Angers.
Among the more famous Artists approached by Barbedienne and Collas were August RODIN and Antoine Louis BARYE.
In 1859 Collas passed away, leaving Ferdinand BARBEDIENNE as sole proprietor of the company which by then had become successful enough to include 300 workers, and was located Rue de Lancry in Paris.
In 1865 Barbedienne was named as the President of the Reunion of Bronze Makers.
In 1870 the start of the Franco Prussian war halted the Art business briefly, but Barbedienne soon received a governement contract for the production of cannons, which kept him from bankruptcy.
After the war he picked up his artwork castings again and by 1876 had purchased 125 casting models from Antoine Louis BARYE. He devoated a full catalogue for these sculptures and was extremely successful in selling them.
He passed away in March of 1891. It was said that he had attained the highest quality of casting ever achieved and that he had helped promote France’s mastery of the Bronze Arts.
The foundry was taken over by his nephew, Gustave LEBLANC, who continued with the same high standard set by Barbedienne until 1952.

The Cassolettes are very heavy and the bronze details are intact. The marble stands are intact!